Pinterest’s first partners for its developer platform, which began opening up in May this year, are starting to roll out — with Polyvore and If This Then That (IFTTT) being among the first.

Pinterest plans to slowly open up its developer platform, requiring developers for the time being to sign up for access and then adding the partners they want to work with to what is essentially a white list. When a developer taps into a user’s boards, they get information about the kinds of things they have pinned and can use that information to figure out new use cases for Pinterest data. 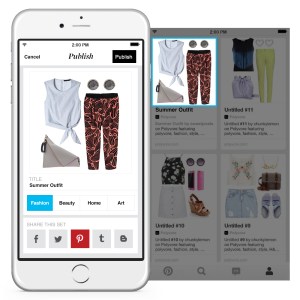 “Pinterest’s API is similar to other social network APIs that we have already integrated into Polyvore,” Vishwa Ranjan, Group Product Manager at Polyvore, said. “Overall it was very easy. We had access to their SDKs and developer dashboards.  They were really great to work with and were always available to answer any questions.”

These are the first two partners Pinterest has started rolling out with its new developer platform, with more coming shortly, the company said. Developers can sign up at any point to request access to the company’s services and build apps on top of Pinterest, though they will have to wait until they are authorized by Pinterest.

Pinterest isn’t known for rushing into anything and over time new developers will come on board methodically. But that developers are finally getting access to the company’s data is a boon for people with ideas for how to use Pinterest’s data — like being able to order ingredients from a Pinterest recipe. It’s taken a while for Pinterest to open up, but seeing the success of other platforms like Facebook, it’s clear that there’s a lot to do with data that’s on Pinterest.

And of course, Pinterest benefits from having developers tap into its data to build new apps. While the company is methodically adding new developers, each new use for the app potentially makes its user base want to come back to Pinterest over and over again. That means that there are more eyeballs on Pinterest, which offers the company more opportunities to monetize its user base — and funnel that money back into research and development and hiring more people.