Dynatrace released the latest version of its application performance monitoring (APM) product today, which it hopes will shift the company from pure monitoring into the realm of customer experience.

Although this is a major release with many new features, it centers on the Customer Experience Cockpit, which is effectively a dashboard that lets users see a User Satisfaction Rating along with other data about performance as it relates to the customer. The idea is to take advantage of all that monitoring data to see the impact that bad performance could be having on customers.

Monitoring tools traditionally look at web, cloud or mobile applications and watch how they are performing. If they are operating poorly, your technical team can dig into the reasons and try to fix the problem. This could happen at any point in the interaction, and be due to any number of issues from the type of device, the operating system version, the Internet connection, the API call and so forth. It makes it challenging to fix these issues when there are so many variables involved. APM tools like Dynatrace have been designed to track down these issues and resolve them as quickly as possible.

Ultimately these problems are having an impact on real customers and they may be expressing their unhappiness by contacting your customer service center, shouting about it more broadly on social media or simply walking away from your website or application.

Dynatrace decided that with the latest release, it wouldn’t just focus on the technical side of the equation. It would also provide data for the folks in marketing, customer service and other departments who touch the customer and give them the tools to see the effect of these issues on customers in real time. 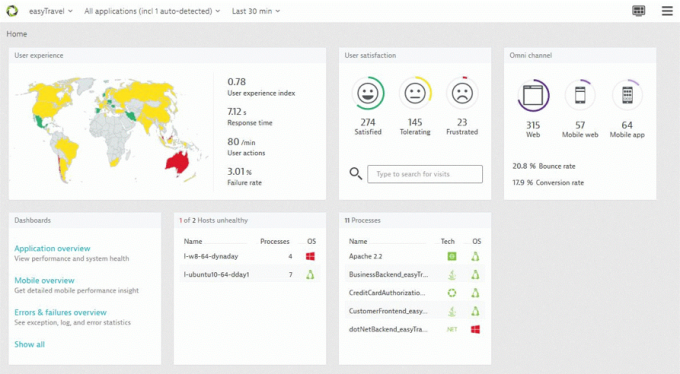 The company is betting that armed with these tools, the non-technical teams will communicate with the technical side when things go wrong that are having a big impact on customers.

The question is whether these teams with other tools at their disposal such as marketing automation and social media monitoring will feel comfortable using a tool that has been traditionally geared toward the technical side of the company.

It’s also unclear whether companies with clogged communications channels and backed up IT help desks will respond quickly enough to requests from departments when time of is of the essence.

In fact, studies have shown that people have little patience with poorly performing websites and apps, and will quickly abandon them if they aren’t working correctly. They certainly won’t wait the typical amount of time it would take for the internal bureaucracy of a large company to deal with these issues.

Dynatrace has had an interesting history. It launched in 2006 and raised almost $22 million before being sold for $256 million to Compuware in 2011. Thoma Bravo, a private equity firm, bought Compuware last year for $2.5 billion, then spun off Dynatrace as private company within its portfolio. More recently Thoma Bravo merged Dynatrace and Keynote, another portfolio company focused on APM.

Today marks its first major release in its new guise.