Livestreaming app Meerkat has launched an embeddable player so that content being broadcast to the app can be embedded into and viewed on other digital services. The first implementation of the player is with the Discovery Channel, for its annual Shark Week multi-platform event — which begins July 5.

The Meerkat player will be used to add behind-the-scenes content on the channel’s DLive web portal, as part of a round-up of streaming content. Shark Week content will also be pushed out to Meerkat users, via a @SharkWeek account, giving Discovery’s programming another digital outlet.

Streaming content Discovery is lining up to produce for — and Meerkat into (if I can put it that way) — Shark Week includes interviews with shark experts, a live shark feeding from the National Aquarium in Baltimore, shark-related vox pops, and a series of “Watch With” viewing parties with a Shark Week comedian. 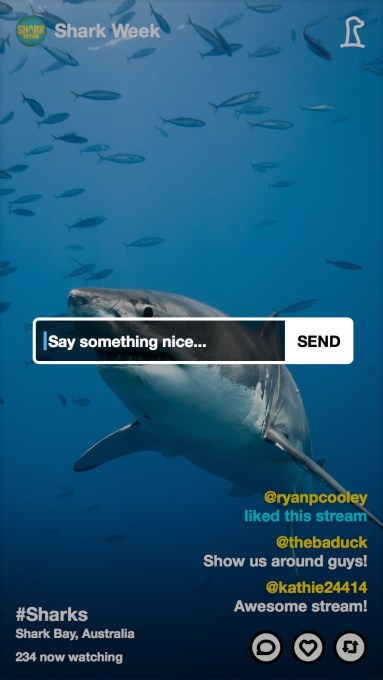 Quick recap on the livestreaming app wars: Meerkat got an early headstart when it launched this year by piggybacking on Twitter’s network. Before Twitter waded in, and started throwing its weight around with its own app, Periscope. Cue Meerkat falling back to earth with a bit of a bump.

Meerkat hasn’t thrown in the towel. It’s fighting smarter, as well it must against heavy hitter Twitter. Meerkat’s weapon in this David vs Goliath fight is openness, via a public API. Developers can integrate Meerkat into their services — which is why there’s already a Meerkat drone in the works, rather than a Periscope drone, for instance.

The startup launched its official public API back in May, but had already been letting developers dip in in private. The Meerkat API lets developers pull arrays of all current or scheduled streams, plus details such as comments and watchers. The new embed feature removes even more friction to encourage developers to get involved.

Co-founder Ben Rubin said Meerkat wanted “one great example” to get things going with the embed feature, hence launching with Discovery. He added there’s “huge interest from other partners”. No word on who else it’s hooked yet.

Meerkat is also not disclosing active users yet but Rubin reiterated that May was its highest month for traffic yet — more than 3x traffic levels in March.