Today’s taxi driver protest is getting out of hand. According to the police, 2,800 taxi drivers are protesting today against UberPOP, the European equivalent of UberX (as UberX in France is Uber in the U.S.). With UberPOP, everybody can become an Uber driver — taxi drivers see the service as unfair competition as they have to get a special license. Yet, this doesn’t really explain why cabbies are now attacking Uber drivers, burning and breaking their cars.

The police have already arrested a taxi driver and an Uber driver. The cabbie was throwing projectiles toward the police, while the latter was attacking a cabbie. It is currently very difficult to go to Charles-De-Gaulle and Orly airports as taxi drivers are blocking the roads. Taxis are also controlling many parts of Paris, looking for Uber drivers.

There are other protests happening right now in Nice, Marseille, Toulouse, Bordeaux, Lyon and Lille. It’s the biggest protest so far against the urban transportation company in France as UberPOP has been expanding to new French cities.

UberPOP is the most controversial part of Uber in Europe, and many countries are trying to ban the service. It was banned in Brussels, the Netherlands and, yes, France.

But in many cases, Uber didn’t take its drivers off the road. After UberPOP’s launch, most taxi drivers were mainly raging against the new service. That’s why it is now on the brink of illegality or already illegal, depending on who you ask.

You can still easily order an UberPOP in the company’s app. The police have been issuing fines in Paris, but when an UberPOP driver gets fined, Uber pays.

Interior Minister Bernard Cazeneuve already issued a statement, saying that he asked Paris police chief to issue a decree making UberPOP illegal (once again). But he also said that only a court order can make the Uber app illegal in France.

Prime Minister Manuel Valls said that he would hold a meeting with taxi union representatives tomorrow. All the unions declined the offer, saying that they don’t want to talk to the Government anymore.

“Uber firmly condemns the recent acts of violence against Uber partners and their cars, perpetrated today in Paris and in other French cities; whatever the anger, violence is never acceptable. Uber wishes to underline the fact that no French court of justice has declared uberPOP illegal,” an Uber spokesperson told TechCrunch.

As I am based in Paris, I am now heading to the protest and will update this post with pictures and quotes from the protesters.

I saw a group of taxi drivers talking together and asked them a simple question — why are you protesting today? At first, the drivers were reluctant and didn’t want to talk to me. “You are a journalist, you already know everything, we don’t want to talk to you,” one driver said.

We burnt this car — look at the video. A taxi driver

Then, after a couple of minutes, they told me everything. “Here’s the truth, I have three children and I don’t bring enough money home,” another driver said. Many kept saying how little money they earn, and how hard it has become.

“I don’t even earn enough money to pay for a taxi ride. If I weren’t a taxi driver, of course I would use UberPOP. A €10 taxi ride costs €4 euros on UberPOP,” a driver said. “This American company is trying to fuck us, so we found a way to fuck them back — we don’t pay taxes on our rides,” he said.

An apparently unknown man joined the group. Quickly, one driver suspiciously asked “are you a taxi driver or an Uber driver?”

He said that he was a taxi driver. “I work 16 hours a day, 7 days a week,” he said. “I’ve been a taxi driver for 7 years, and went on vacation only twice in 7 years.” Then, he showed me some pictures on his phone.

On the first picture, he was standing up on top of a black Mercedes car that looked like an Uber car. The picture was taken this morning. The next picture was a video of the same car, except this time it was upside down and on fire. “We burnt this car — look at the video.” he said. 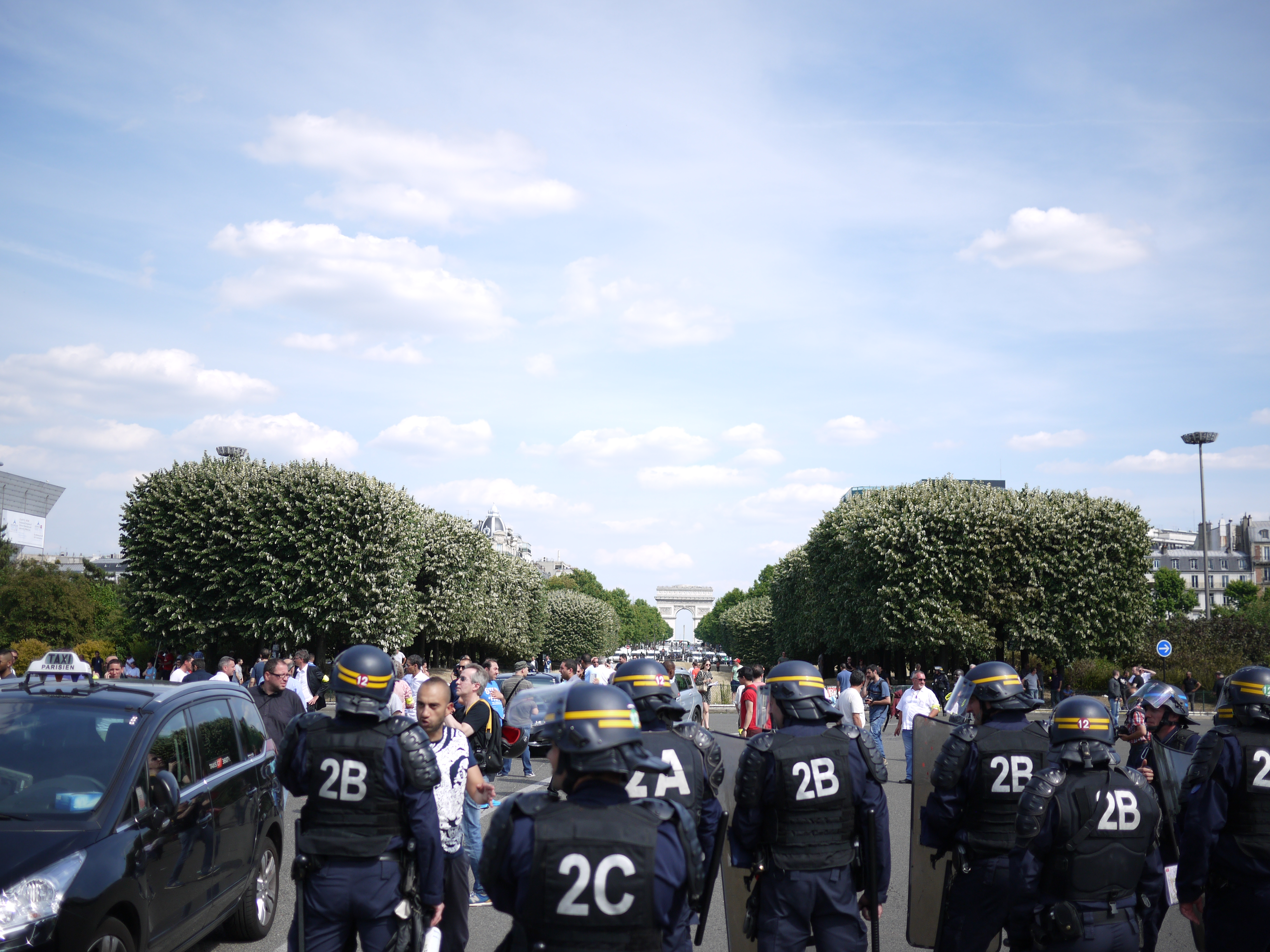 I took the subway to Porte Maillot, a usually very busy highway interchange. When I got out of the subway station, the streets were perfectly quiet. Instead, I could only see dozens of parked taxi drivers, blocking the road. Not far, a group of taxi drivers were listening to a taxi union representative. From time to time, a loud firecracker broke the silence.

At some point, a taxi union representative said in a megaphone that a black Mercedes car was about to be towed and impounded. All the drivers started shouting and walking in the same direction — it was just a false rumor.

I heard a riot policeman saying “we need to block the street, let’s call for backup.” Everyone — policemen and drivers — all went toward the same black Mercedes, which had a taxi sign. Drivers started arguing with the police, while a lot more riot cops were coming.

“Let’s form a line and push back,” a policeman said. The riot cops quickly circled the drivers and peacefully walked toward Porte Maillot, forcing them to move back a bit. There were a significant number of policemen with tear gas in hand. In other words, the police was in control of the situation now.

According to the AFP, three taxi drivers were arrested this afternoon in addition to the two arrested Uber and taxi drivers from this morning. Two of them were arrested near Porte Maillot for throwing stones and projectiles toward the police, while the last one was arrested near Gare du Nord for using tear gas on an Uber driver. Interior Minister Bernard Cazeneuve will meet with taxi union representatives at 6:30pm local time.

Interior Minister Bernard Cazeneuve came back to Paris to talk to taxi unions this evening. Feeling that the Government was about to give up, Uber also asked to meet with Cazeneuve.

But for now, Cazeneuve only talked to taxi drivers, saying that UberPOP is now illegal (again), and that he would ask for a justice court order confirming this decision. Uber France director Thibaud Simphal said to BFM TV that as long as a justice court didn’t order Uber to stop UberPOP, the service would continue.

So it’s going to take a while, but the Government is clearly backing taxi drivers after a very violent day — 70 cars were damaged and 10 people were arrested by the police.

Dude @kanyewest we may turn back to the airport and hide out with u.picketers just attacked our car #ParisUberStrike pic.twitter.com/MtanurybOO

they've ambushed our car and are holding our driver hostage. they're beating the cars with metal bats. this is France?? I'm safer in Baghdad

François Hollande where are the fucking police??? is it legal for your people to attack visitors? Get your ass to the airport. Wtf???

paid some guys on motorcycles to sneak us out, got chased by a mob of taxi drivers who threw rocks, passed two police and they did nothing