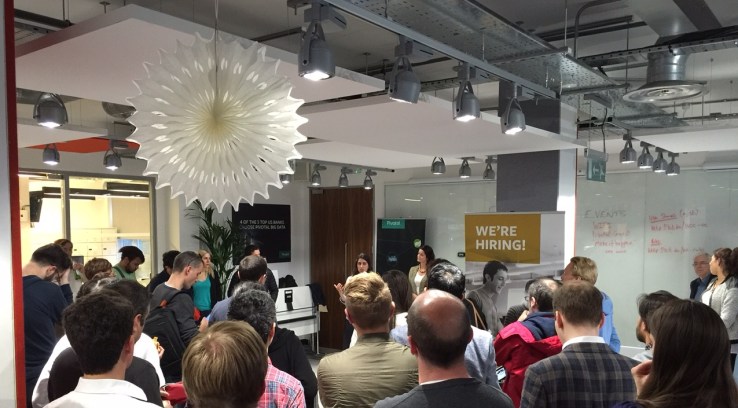 Silicon Valley’s 500 Startups isn’t new to the U.K. or Europe by any means. The seed investor and accelerator program has backed something in the region of 15 to 20 British startups, depending on how you count these things, and over 50 European startups overall.

But now TechCrunch has learned that Dave McClure and co. are officially setting up shop in London with the launch of “Distro Dojo”, a new three-month program for ‘post-seed’ startups that will aggressively focus on growth in a bid to help bridge the gap between seed funding, which is arguably becoming plentiful in the U.K., and the so-called Series A “crunch”.

It plans to accept around 20 startups in the first year and, as part of the program, make investments in the £100,000 to £200,000 range, although they’ll be an approximately £30,000 program tuition fee, while teams will also be housed for one out of three months at the new WeWork building in Moorgate. The size of equity taken will vary and be on a deal-by-deal basis, but will likely be in the 3-7 per cent range based on each startup’s valuation.

News that 500 Startups was putting down further roots here began to circulate amongst the startup community a couple of months ago but intensified after 500 Startups held an event in London’s ‘Silicon Roundabout’ on 1st of June. It was part of the investor’s road show, which also included Toronto Tel Aviv, Berlin, and L.A.

Around 100 people showed up at Pivotal Labs in Shoreditch that night to hear 500 Startups pitch its recently announced ‘pre-Series A’ fund, without public mention of an accompanying program. The event was attended by representatives from 500 Startups’ West Coast office, along with London-based Matt Lerner, who will be heading up the newly launched Distro Dojo locally and the 500 Startups London office.

He previously held various roles at PayPal and most recently led business-to-business marketing for PayPal U.K. Perhaps unsurprisingly, Lerner was first recruited to the online payments behemoth ten years ago by McClure himself, so the two go way back and the “PayPal mafia” story continues.

Confirming the existence of its London-based Distro Dojo program, McClure told me in a call that it is 500 Startups’ “growth hacking” expertise that it wants to bring to London. This will include support from the investor’s in-house “Distro team,” a group of growth hacking/marketing experts who already partner with 500 Startup’ portfolio companies to help them build what McClure calls growth engines and scale significantly faster.

(In fact, the original thinking was to offer this “crack team” as a service for hire but in the end it became clear that offering it as part of investing made more sense.)

Specifically, the problem he and Lerner are attempting to solve is that whilst a plethora of accelerator programs (and seed funding) already exists in the U.K./Europe, and London in particular, they largely focus on helping startups develop their product and find market fit before pitching investors for a larger round. However, unable to show enough growth or, perhaps more importantly, how they plan to continue to grow and what systems they have in place to achieve this, post-seed startups often struggle to raise a Series A, which in comparison to seed funding is already much scarcer, not least in Europe.

In that sense, McClure reckons 500 Startups isn’t competing with established accelerator programs in London/U.K., such as Techstars or Ignite. Although the lines blur a little more with Seedcamp, which operates more like a fund plus support these days. That said, 500 Startups already works with the Seedcamps and Techstars of the world and its new program might also be thought of as post-accelerator as well as post-seed.

“When we looked at the market, there’s a lot of early-stage angel and seed money in general, and good ‘smart money’, such as Techstars and Seedcamp, which offer great services, so we didn’t want to go in and be the 101st accelerator in London. That’s why we decided to focus on post-seed,” Lerner tells me. “There is a Series A crunch — these seed companies coming out really need to get their KPIs up before they can raise another round and growth is really our specialty. That’s where we think we can add the most value to the ecosystem.”

In terms of cohorts, Lerner says its London program will be accepting five startups at a time, running four programs in its first year. The first one kicks off on September 1st.

Noteworthy, 500 Startups is not planning to run an application process. Instead, post-seed companies with “demonstrable product-market-fit and measurable traction” will be identified through its existing and far-spanning network, which I’m told includes 3,000 founders and mentors worldwide.