If you care about tech news in Asia — and you should! — then chances are that not only do you read us here at TechCrunch — thanks and hi! — but you might also be aware of Tech In Asia. Well, today is an interesting day for our friendly rival which just raised $4 million.

Started in 2011 and now with 70 staff across all departments, Singapore-headquartered Tech In Asia bills itself as a news site to “serve and build Asia’s tech ecosystem.” That’s certainly become more apparent these past few months. That’s because, in addition to its editorial team and blog, Tech In Asia has built out a paid-for analytics service called Techlist — in the style of TechCrunch’s own, indomitable Crunchbase — and it recently took the wraps off a bold redesign that turned the site into a community hub, which allowing users to vote stories up (and down) and even contribute their own posts. 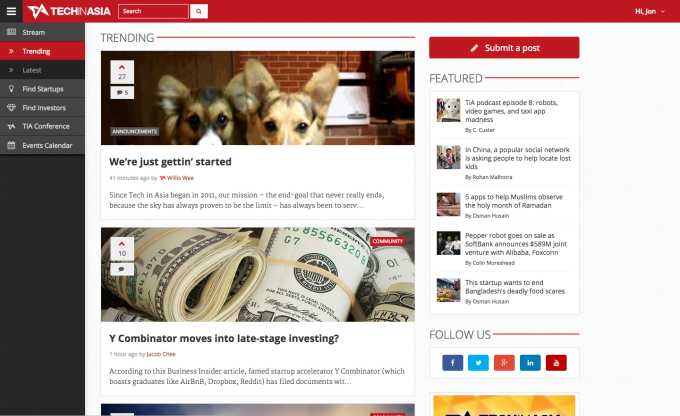 These recent moves are unsurprisingly considering that Tech In Asia has been incubated at Y Combinator — “it really opened my mind, I’m so grateful,” Tech In Asia founder Willis Wee told TechCrunch in a brief interview. There, the team seems to have come away with new ideas for engaging its audience and monetization — neither of which is easy for media startups in today’s age.

The final addition to Tech In Asia’s new focus is this funding round, which is provided by a range of investors, including SB ISAT Fund — a fund backed by SoftBank and Indosat among others — and now Singapore-based Facebook co-founder Eduardo Saverin. Walden International, Marvelstone, and m&s Partners participated too. Interestingly, also in the round is AJ Solimine, who co-founded of Nitrous.IO — a company Saverin has invested in.

It’s always tricky to balance the conflict of investors who are also actively involved in the startup scene, and are therefore topics for news story. Indeed, Nitrous.IO — which has teams stationed in Silicon Valley and Singapore — is a new kind of conflict, since this is the founder of a startup that Tech In Asia writes about. Tech In Asia has its own ethics page which lists its investors and pledges to operate independently of them.

It’s always interesting to watch media companies develop. Realistically, going deep on a niche topic like Asia tech is challenging, particularly when you try to consider potential exits. I understand that Tech In Asia has been profitable in the past, thanks to a combination of events and ad revenue coupled with relatively low costs, but now it is making a big push to be a startup hub for Asia’s tech community. While I’m personally happy to work for a news site that focuses on news and not user-generated content, it’s an interesting approach and there’s more to come. Tech In Asia is promising that it has a “whole lot of exciting changes and new features planned for the community over the next 12 months.”

Wee didn’t say exactly what future services will arrive, but you’d suspect they will be other paid-for offerings — like Techlist — to boost revenue, as well as engagement. . [Update] Tech In Asia confirmed that has 2.4 million views across its English and Indonesian websites.

Either way, $4 million is the largest round I’ve ever seen for a tech-focused media company in Asia — let’s see how the folks over at Tech In Asia use this.

Tech In Asia previously raised $2.89 million across seed, Series A and (dual) Series B rounds. Other investors in the company include East Ventures, Fenox Venture Capital and Simile Venture Partners.

PS: If you want to get an idea of Tech In Asia’s community focus, you can read the AMA that I held there last Friday. VCs and prominent members of Asia’s tech community have done others too recently.