DocSend, a startup that provides people with a secure and private way of sharing files like offer letters or legal agreements, studied more than 200 pitchdecks to figure out the right way to graduate from bootstrapped to seed-funded, or from angels to a Series A.

They partnered with Harvard Business School professor Tom Eisenmann to look at companies that had raised $360 million in total.

What did they find? You can see the whole study here.

Anyway, they discovered that companies needed an average of 40 investor meetings and took a little over 12 weeks to close a round. Investors don’t look at pitch decks for very long — just an average of 3 minutes and 44 seconds. 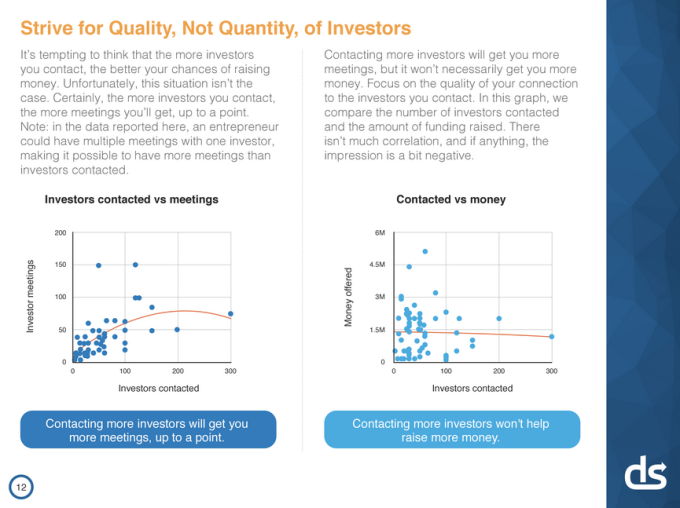 It’s better to go find firms that are already aligned with what your company does and target them first. 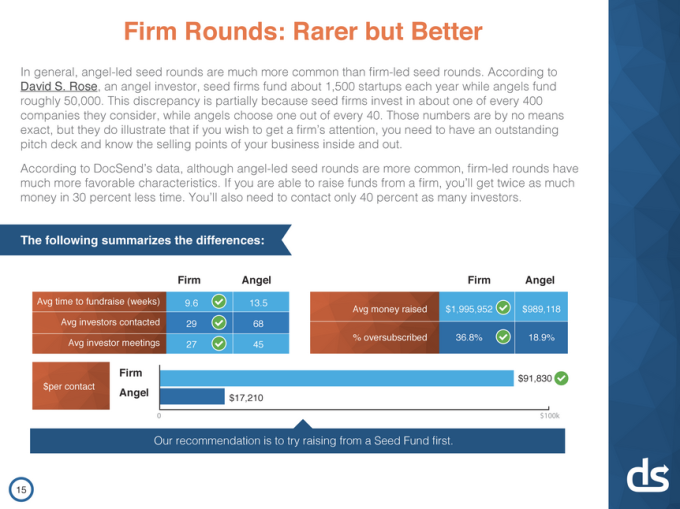 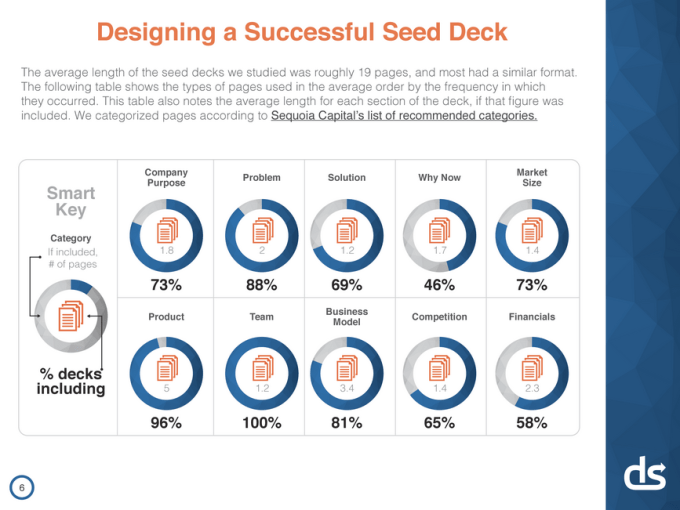 If you’re doing a seed deck, here are the 10 slides that you’ll probably want to include. Obviously, the ‘Team’ slide is a given. But you’ll also want to add slides describing the company’s purpose, its market size and its competition. 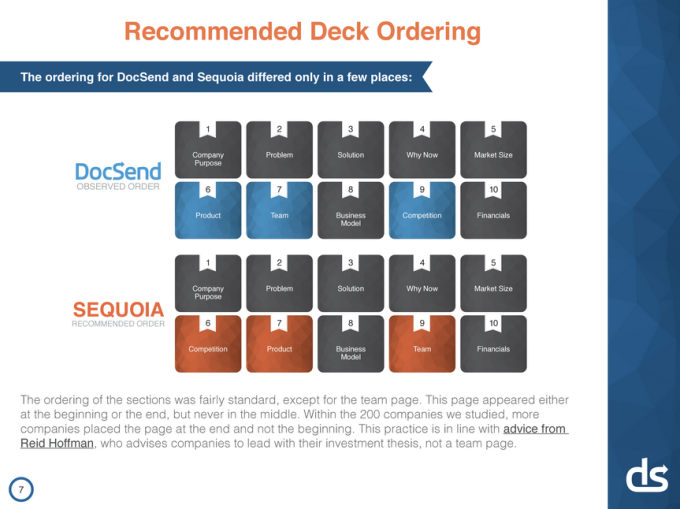 The slide deck ordering that DocSend found was the most successful is pretty similar to what Sequoia Capital’s recommended order is for entrepreneurs. The only things that were switched were putting the product and team earlier in the order, rather than later. 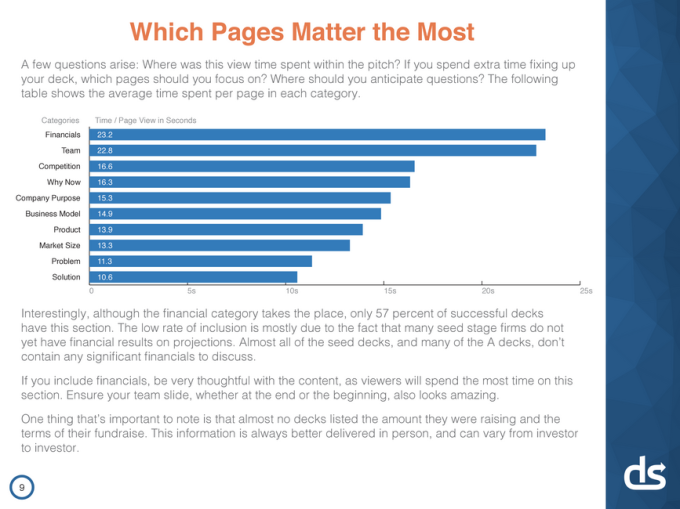 The most important pages are the financials, team and competition, according to how long investors study them. 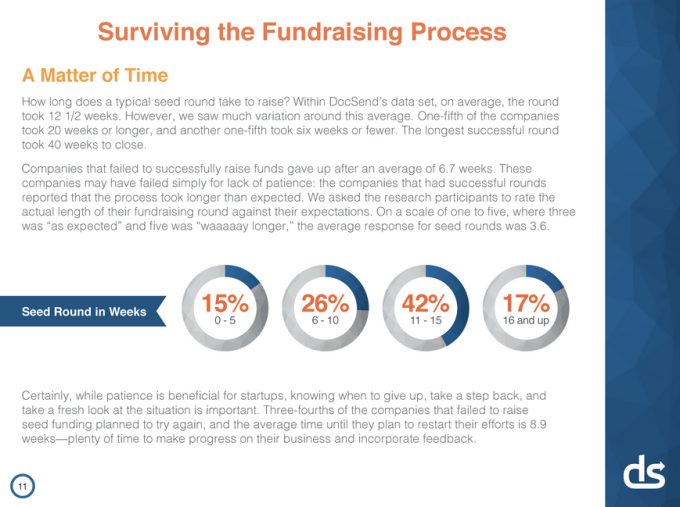 Closing a funding round is a matter of persistence. Fifteen percent of rounds took zero to five weeks to close, but there was a huge level of variance beyond that. Nearly half of the rounds took 11 to 15 weeks to close, with 17 percent taking 16 weeks or longer. 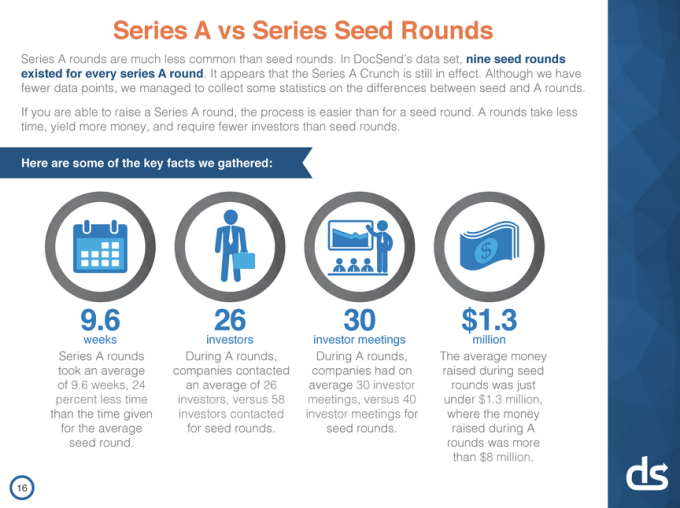 Interestingly enough, despite what you’ve read about the “Series A crunch,” these later-stage rounds took less time than seed rounds. Companies in DocSend’s sample took 9.6 weeks to close an A round and only needed to contact an average of 26 investors. Of course, the sample size in this study very small so it is probably not representative, co-founder Russ Heddleston tells me. 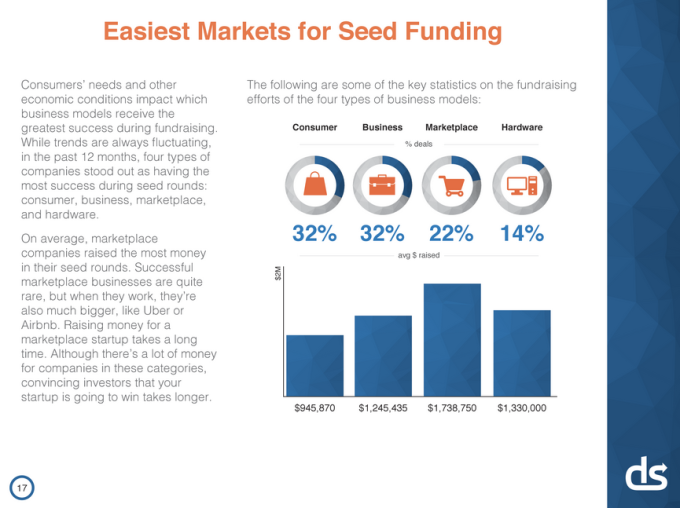 The split in areas from consumer to enterprise to hardware isn’t that surprising. Consumer startups made up the largest share of funding rounds, which isn’t that unexpected since it’s cheaper and less risky to launch a minimum viable product in this space. That was matched by enterprise, and then followed by marketplace and then hardware startups.