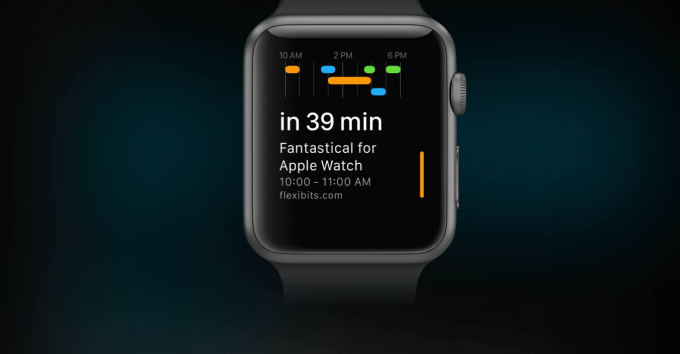 Fantastical fans will be happy to hear that the indie calendar app for Mac and iOS is making the jump to the Apple Watch.

For those wondering why the app hadn’t made the jump sooner (“It’s been out for a month, what the heck!” is what I imagine frustrated Apple fans mumbling to themselves), Fantastical developer Michael Simmons says the team decided to wait until he  Apple Watch was available to test on before pushing the app out to users.

The result is a nice addition to the limited number of apps that actually feel designed for the wrist. It doesn’t try to do anything fancy. The best part is the included Glance, which gives a clear picture of the next several hours. Instead of just showing the time of the next upcoming calendar event, it gives a color-coded graph, the time remaining until the next event, its calendar description, and additional information like dial-in numbers.

The time remaining line is great for, well, managing your time. I’ve noticed that I occasionally don’t register the time shown on Apple’s calendar complication the first or second time I look at it because the number often doesn’t update for hours at a time. Fantastical gives me a number that changes every time I look, which seems to “stick” more often than not.