Facebook is testing a new feature called “Saved Replies,” which will allow business Page owners the ability to write, save and then re-use canned messages when communicating with their customers over Facebook. The addition will save businesses time when handling incoming customer service inquires and responding to other customer feedback via the site.

The feature, which is available now to a select group of business owners via the messaging interface on Facebook Pages, offers a simple tool that lets a Page admin create a new reply, save it for later use, and even search through their list of replies to find the one they need. This latter option is especially helpful for those who have a longer list of replies and don’t want to scroll to find each one.

Businesses are initially offered a couple of sample replies they can use out-of-the-box or customize, we’re told, or they can simply create their own. After set up is complete, to use a saved reply, you just click on it from the list and it automatically appears in the body of the email.  You can also access the option from the messages reply box, where a new option lets you click a small icon to respond with a Saved Response. 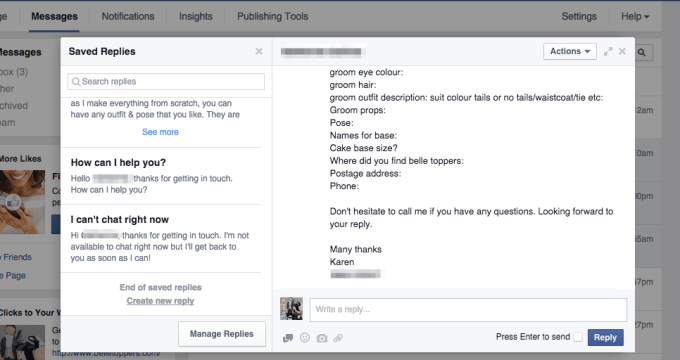 Also handy is the fact that the replies themselves can be personalized using auto-populating placeholders similar to what you would use with form email messages, for example. There are personalization options that let you insert a person’s first name or last name, the admin’s first or last name as well as the website URL.

Saved Replies appears to be in limited testing right now, as one of the businesses with access to the option tells us that they were not informed by Facebook of the feature’s launch. Instead, when they opened up an email to craft a reply to a custom, the option just appeared. Several other Page admins we spoke with report that they don’t yet see this available on their Pages.

It’s not unusual for Facebook to test a new feature with a smaller group of users before a larger, public rollout, of course.

Saved Replies was first spotted by the blog MyTechSkool, as well as several others posting about it on social media, including Twitter. We’ve asked Facebook for additional details surrounding the feature set and rollout of Saved Replies, and will update if the company responds. Some Page admins say they don’t yet see the option on mobile, but that could be due to how new it is, at present.

While larger businesses today may utilize professional helpdesk platforms like Zendesk or Freshdesk to handle customer service messages initiated via Facebook, the new Saved Replies feature will likely be of more use to smaller businesses, including startups, home businesses, and mom-and-pop shops, who today often keep a list of standard replies they copy-and-paste into messages.

Over the years, Facebook has been slowly ramping up its community management and Page management tools for business users, helping them save time by automating tasks that would have otherwise involved more manual efforts. For instance, years ago, Facebook introduced a keyword moderation blocklist feature for Page owners, which helped them reduce the time it took to fight spam as well as moderate and remove other unwanted (e.g. profane, offensive, etc.) comments.