Streaming TV provider Netflix has always shied away from advertising, preferring instead to make money from a monthly subscription it charges users to gain access to its content. The company has no plans to change that, despite a recent test of teaser ads for some of its own original programming both before and after selected TV shows.

Netflix subscribers recently noticed the emergence of teaser trailers the company has run to showcase some of its new original programming. As spotted by Cord Cutter News, those test spots initially appeared during user viewing sessions as post-roll ads at the end of a show or episode, but recently Netflix has begun testing out pre-roll teaser ads on some devices as well.

“We’ve had originals teasers at the end of shows for a while. Some members of seeing tests at the beginning of shows. As you know, we test many things over the year, many of which are never universally deployed,” Netflix spokesperson Cliff Edwards wrote by email.

What Netflix is doing isn’t exactly new. Premium cable networks like HBO or Showtime — which don’t run traditional ad units but rely instead on monthly subscription fees — have historically teased upcoming shows or new seasons of fan favorites as a way to keep viewers interested in new content and to keep them as subscribers when current show seasons end.

Check out a new episode on HBO Go or HBO Now, for instance, and you’ll probably see a 30-second clip featuring the new season of True Detective or the upcoming Dwayne “The Rock” Johnson series Ballers.

In the same way, Netflix’s pre- and post-roll spots are meant to get viewers interested in what is a growing stable of shows that are entirely new, or just entering their second or third seasons. The service is hoping to keep users interested in new programming, which is especially important once they’re finished binge-watching the latest season of whatever the most recent original to launch is.

Unlike HBO, which can stretch out a series run over 10 or 12 weeks by releasing one episode per week, Netflix typically drops all new episodes of an original show at once, which means a much shorter amount of time before subscribers are searching for something new to watch.

While Netflix is looking to spur interest in original or exclusive programming, the company is adamant that it’s not looking to use the same tech to run third-party ads on its service. In a followup phone conversation, Edwards clarified that Netflix will continue to eschew ads from third-party providers.

“Our policy around ads is unchanged. We have no plans to support third-party ad units,” he said.

So if you’re a cord cutter and prefer to watch Netflix because it doesn’t have ads, that probably won’t change anytime soon.

UPDATE: Yeah, so Reed Hastings pretty much shot the ‘ads’ thing down as well 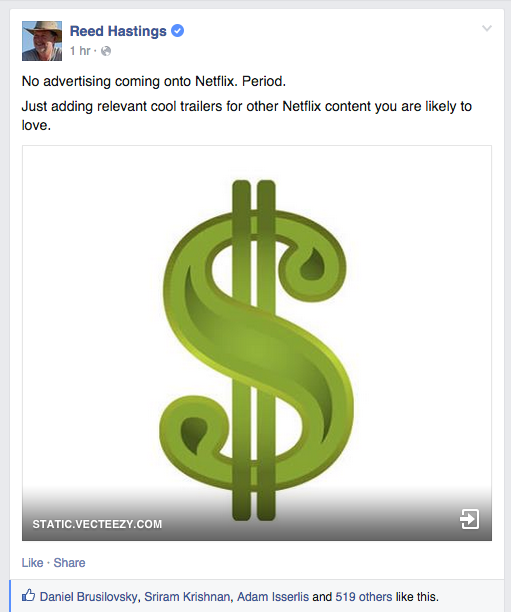