Julie Ruvolo Contributor
Julie Ruvolo, a former writer for TechCrunch, is the head of editorial content for the Latin American Private Equity and Venture Capital Association.
More posts by this contributor

Movile and Just Eat are responsible for investing in all but iFood’s original $1.6mm Series A. Movile invested $4.6 million in the company’s B and C rounds, and last year Just Eat funded a $5.7M Series D and merged its Brazil operations with iFood. Movile CEO Fabricio Bloisi and CFO Arthur O’Keefe sit on the board with Jerome Gavin from Just Eat and Dan Faccio from Naspers, which owns a majority stake in Movile.

Movile, which has a 60% controlling stake of iFood, bills itself as the largest mobile commerce platform in Latin America by a number of indices: Gross Merchandise Value through mobile, net revenues, profits and market share. They’ve seen 80% growth year over year since 2008. Their portfolio of B2B and B2C companies includes some they have invested in, like iFood, Apontador, the “Brazilian Yelp,” and MapLink, the “Brazilian Waze”; or baked from scratch, like Playkids, the number one grossing app worldwide for kids. The company has six co-founders, and Fabricio Bloisi serves as CEO.

British food delivery giant Just Eat is a global player in online takeout ordering, and owns a 30% stake in iFood. Jesper Buch founded Just Eat in Denmark in 2001, and boostrapped its way to a Series A by Index Ventures in 2009. Greylock and Redpoint Ventures invested in 2011, and the company went public in 2014.

“At the time of the IPO,” a spokesperson for Just Eat says, “we estimated the Brazilian online takeaway food market to be worth at least £1bn annually [$1.5 billion] and potentially multiples of this, making Brazil the most attractive market in our industry in Latin America. While we had built a great position in Brazil over the years as the second biggest player, RestauranteWeb, the network effects that come from being a clear leader are significantly better. The merger with iFood to form our Joint Venture was a pragmatic move.”

“We made all sorts of errors in the beginning, but by the start of 2013 we had a good team in place, we were gaining some market penetration, and were very strong on mobile, which we believed in strongly.” Felipe Fioravante

iFood’s genesis pre-dates both of its investors. An engineer named Patrick Sigrist started a food delivery company called Disk Cook in 1997. iFood’s current CEO Felipe Fioravante quit a consulting job in 2009 to join the company with some of his friends. “If we met certain metrics, we’d get some equity in the company,” Fioravante explains on a call from São Paulo. “It was a really informal agreement.”

The idea of creating a modernized take on Disk Cook, a search directory for take-out in your neighborhood, was put on the back burner until 2011. “We realized we were already behind the market, there were already competitors, and we were losing the market that should be hours,” Fioravante says. iFood launched that same year as a spin-out from Disk Cook, and by 2012 they raised a $1.6M Series A from São Paulo-based Warehouse Investimentos, which lasted till 2013.

“We made all sorts of errors in the beginning, but by the start of 2013 we had a good team in place, we were gaining some market penetration, and were very strong on mobile, which we believed in strongly,” Fioravante says. Then Movile invested the Series B, and iFood’s growth curve took a dramatic turn upwards. “When Movile entered the deal we were doing 30,00 orders per month, and we ended the year with 110,000 per month.” Then, last year, iFood bought out Disk Cook.

“In these last three years we’ve seen amazing growth,” says Fioravante. “iFood is now #1 in Latin America, with more than 80% market share in Brazil, and amazing performance on mobile.” 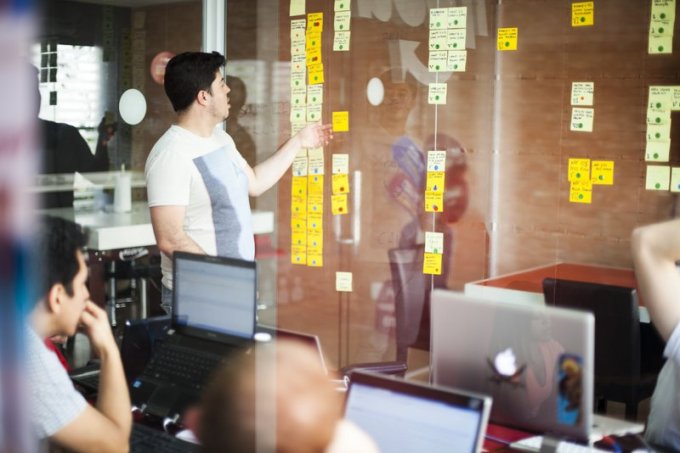 That puts them in an envious leading position between two massively quickly growing industries: mobile and ecommerce. Brazil is the world’s fifth largest mobile market, with 283mm mobile phone lines, or 1.39 per person, and is growing faster than anywhere else in the world, according to data from IDC Worldwide. Brazil also has the the fifth largest smartphone market in the world. And Brazilians are significantly more tethered to their devices than their American counterparts.

Meanwhile, e-commerce is growing faster in Latin America than anywhere in the world, besides China, and Brazil is leading the charge with 21% year over year growth. Add the fact that 20% of all e-commerce purchases in Brazil originate on mobile and you’ve got a hot market opportunity.

Riding the amplitude of these massive waves, iFood says 75% of their orders, and nine out of ten new users, are coming from mobile. “I think it’s one of the highest rates in the world, at least of the food delivery companies we’ve heard about,” says Fioravante. (By comparison, GrubHub says that over half their orders come from mobile; Eat24 is just under 50%.) “People know us as an app they can use to order food,” says Fioravante, “and that makes the entire difference. Especially in Brazil, most people are buying cell phones before having computers, if they have one at all. Web is important, but the future is mobile.”

With the launch of the world’s most expensive iPhone in Brazil a few years ago, smartphones started off as a status symbol, accessible only to the nation’s wealthiest segment, or “A” class. But with Android phones entering the market at significantly cheaper prices, access is spreading. “There are over 60 million smartphones in Brazil,” reasons Fioravante. “It’s a lot bigger already than our “A” and “B” [upper] classes combined. We’re limited today by smartphones and who has them, but our vision is to make this app for everyone.”

While Brazil has traffic and transportation infrastructure hurdles that make timely delivery a logistical challenge, Brazil also has a strong culture of same-day delivery already in place. In Rio, I’ve had everything from prescription drugs to a 50-kilo bag of dog food delivered for free or nearly free by delivery men on street bikes. Similarly, iFood relies on a fleet of 900 moto-bike drivers through a partnership with Movile’s app, Rapiddo, to deliver their orders. “I was in the US this month and saw that the culture of delivery isn’t as big as here in Brazil,” says Fioravante.

iFood closed 2014 with over 500,000 delivery requests per month, capturing 80% of the online restaurant delivery market. With 10-12% growth month over month, they expect to hit one million deliveries per month by the end of the year.

“If iFood were local to the US would be second only to GrubHub,” adds Movile’s Bloisi. “Across the world, we would be second only to Just Eat in the UK, Delivery Hero in Germany and Turkey, and local players in South Korea and Japan. At the same time, we are growing two to six times faster than them — they grew at 50-100% in 2014, and we grew 350%.”

But it’s a digital drop in a very big analog market. Fioravante estimates iFood is capturing less than 4% of the potential volume, and food delivery doesn’t even rank on the list of Brazil’s top 10 ecommerce categories. “Most people don’t know they can order online. But we’re confident Brazil is one of the biggest markets in terms of growth.”

Moreover, $50 million is a drop in the bucket compared to the estimated $1.28 billion that has been invested this year in delivery companies worldwide, according to data from CrunchBase. Fioravante says the capital infusion will go towards closing the online ordering gap and communicating the service better with marketing investment; growing quickly in cities they don’t have a presence; and building out the team and technology.