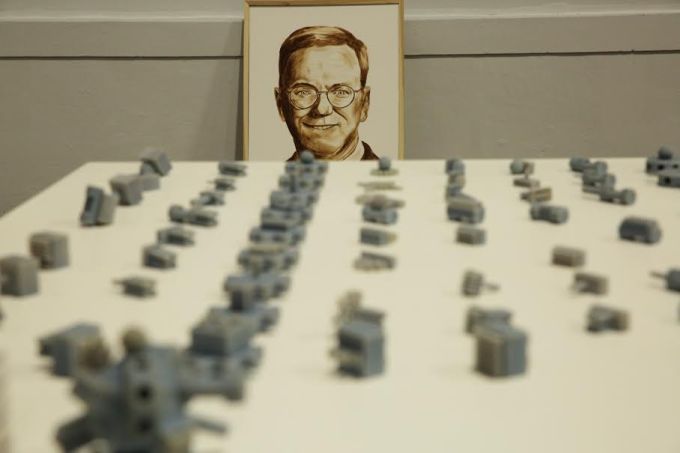 If you happen to be staying in San Francisco during the long Memorial Day weekend, one of the things you can do is see the art in the F.A.T. Gold Retrospective at Gray Area in the Mission District.

F.A.T. Gold is a collective of hackers, engineers, musicians, and graffiti artists who have created punk projects that have unleashed fake Google Streetview cars onto the roads of Berlin to a Free Universal Construction Kit that makes pieces from Lego, Lincoln Logs and K’nex kits connected.

“What I love about the F.A.T. Lab projects is how joyful, trashy and funny they are,” said Golan Levin, who created the universal construction kit as a critique on how corporate-created children’s toys are not inter-operable. “They never took themselves too seriously. There’s a certain kind of contemporary punk in it.”

Below is a short video about the group’s work:

And what follows is an edited interview with Katsu, a pseudonymous drone graffiti artist who just finished a poop painting of Google Chairman Eric Schmidt (called “Eric Shit”) that is going on display with the retrospective this weekend. One of his drones recently defaced a Kylie Jenner billboard in Manhattan earlier this month.

So how did you get into shit painting?

Katsu: My background is in graffiti, hacking and just general technology. The painting is part of a series of paintings that I did called “Shitheads.” I had done a portrait of Mark Zuckerberg earlier this year in my solo show at the Hole Gallery in New York. It was a triptych of Mark Zuckerberg, Eric Schmidt and a dog that I grew up with.

I like getting my hands dirty. I was thinking about the human body removed from all art mediums. I was thinking, what is the human body capable of producing pigment-wise? You can use blood, feces, semen and urine. If you just stripped away and removed humans from everything and all technological devices, what could the body naturally produce?

I’m also a little bit fascinated with data on any level. I was really interested in the taboo of feces. I was watching a Gates Foundation video about how Bill Gates is trying to revolutionize the toilet and change the way we look at excrement.

But it’s really about bio-data. These titans of the cloud, are like, basically in competition to control every bit of granular data about individuals. That’s what makes their companies so powerful. They understand that human data has this immense value and they’re shielding and hiding that from the public.

Maybe feces is the last thing that they could possibly control.

Um, actually, there’s this company called Ubiome, that collects poop samples to help you learn about your microbiome, or your body’s natural bacterial flora and fauna. They just started collecting dental and vaginal samples too. And Andreessen Horowitz invested in them.

Katsu: Andreessen Horowitz. Oh God, we should definitely include them in the show.

We were joking about how FAT is going to look for ‘FEECEE’ funding with an undefined use. Silicon Valley should have to pay a premium to have an allegiance with the FAT Lab. We’re a group of brilliant, humble human beings that are trying to do a Warholian kind of tech pop art.

But Warhol lived in and critiqued the era of mass consumer culture. Today, everything is fragmented. How does that affect your livelihood and work as an artist?

Katsu: Tech is becoming this one single thread. People are feeling that if they’re not involved in technology, they’re going to be left behind. There’s this incredible attention, obsession and worship of these Zuckerbergs, Tim Cooks, and that Snapchat kid. We put them on this pedestal of greatness, but they represent this vast separation in class and culture.

I guess I meant, how does fragmentation affect the way you earn a living as an artist?

Katsu: There is still this hyper-exclusive upper art world in New York and the U.K.

I did a booth at the first Silicon Valley Contemporary art fair. It was pathetic. I showed a bunch of drone paintings.

All these big giant New York galleries were hedging. They were thinking, holy shit, we’re going to make a ton of money. They were hoping that these tech titan billionaires were going to show up and let these galleries tell them what art is.

One of their mistakes was doing it in San Jose.

Katsu: You know, we would really like to invite Eric Schmidt to this show. And Jaron Lanier, because he’s my hero.

What we’d love to see are these people, these innovators and geniuses and mutant CEOs who are building our future in San Francisco.

So how do you make a poop painting?

Katsu: There are all these 99 cent stores around where I live that have these Chinese takeout boxes. I have a big hangar studio in East New York.

Oh, East New York? That’s where the artists are these days. Mayor De Blasio is rezoning all of that real soon.

Already, my landlords are getting all weird. They’ll see me squatting into these little takeout boxes. Feces molds pretty quickly, which is pretty whack. So you have to use a lot of gloves and hand sanitizer. I have to wear a mask. Lots of flies play with me while I’m painting.

Do you have to be on a certain diet?

Katsu: People always ask me if I’m eating beets all the time or something. You know, I do name all of my boxes. I have some called “Green Jungle Curry” and “Pad Thai”. Honestly, it’s probably all diner food.

Does the painting smell?

Katsu: It decays. That’s part of the piece. It chips away.

People are into that?

Katsu: Yeah, the guy who bought my Mark Zuckerberg piece was crazy about it.

And how do you do drone paintings?

Katsu: Drone paintings are my main thing. I have a basic consumer drone that carries spray paint.

Are you the one that defaced that billboard the other week in New York?

Katsu: The one of Kylie Jenner? Yeah, that’s me.

Another F.A.T. Gold member made some hardware and software for drone painting. We wrote some code to program different kinds of spraying behavior. And then we made some hardware that’s basically like a finger that sprays the spray paint can. We’re working on releasing it as an open source tool so people can basically build their own painting drones.

What do you think that’s going to unleash?

Katsu: Everything. It’s going to be incredible. It’s just going to be insane. The drone paintings I’m working on are a beginning look.

I think it’s a beginning look at artificial intelligence and art — the idea that if we created super-intelligence, would it decide to explore artistic expression?

But you’re controlling the drone.

Katsu: Only some of the behaviors. We could create preprogrammed flight paths, but we could eventually create a piece of software that can decide what to paint, when to paint and maybe there will be moods where a computer will have a certain mood or feeling or interpretation. You could make a drone that recognizes patterns, so if there’s a billboard that you don’t like, you can bomb those billboards procedurally.

There are also lots of good that drones can do. It’s dangerous to send people on high platforms. So I think drones will do a lot of good in that department — especially with muralists and people painting on the sides of ships and buildings.

F.A.T. Gold is unfortunately disbanding after eight years. But you can see the highlights from their eight years until May 31 at Gray Area on Mission St.

Golan Levin told me: “When the F.A.T. Lab started, it was a style of viral hackery and internet punk-fuckery that was quite novel. Now it has become a style that is widely copied and I think has been in some sense incorporated into the mainstream and kind of neutered as well by its use in ad agencies. So I think it was a movement of its time and it was a good run and we made a big impact. But I think there’s a time when bands break up.”