The hype and buzz that surrounds the nascent consumer 3D printing space can seem drastically out of step with the striated plastic trinketry being outputted by 3D printers. There’s only so many plastic replicas of the Eiffel Tower a person’s desk needs adorning with. And my collection of John Biggs’ 3D business cards is extensive as is.

Of course there are scores of designs of other plasticy things you can print with a 3D printer. But getting any finish other than a monotone plastic finish requires more expensive kit and/or fiddly operations. And even if you mange to produce a multicolored plastic print out, well, it’s still an object made of plastic.

Which is why former Googler, programmer and entrepreneur, Dan Shapiro, is building a new type of 3D printer. Which actually isn’t a printer at all; it’s a laser cutting machine called Glowforge.

Shapiro’s new Seattle-based startup is aiming to bring its first ‘laser 3D printer’ (as they are confusingly calling the device) to market by the end of this year — with a sub-$2,500 price-tag. Which is to say cheaper (and smaller) than the high end laser cutting machines you might be able to rent time on at a maker space workshop. But more expensive and capable than the lower resolution competition (here he points to the Cricut Explore desktop cutting machines, made by Utah-based Provo Craft & Novelty, which start at around $200).

Glowforge is being designed to be a lot more capable than the Crichet. Shapiro says it will be able to cut wood, fabrics, leather, paper, linoleum, food and some plastics (such as acrylic). It will also be able to engrave (but not cut) glass and metal.

The current prototype (pictured below) is 20in x 30in x 8in, so it has a pretty large footprint but is still small enough to sit on a (large) desktop. There’s no screen on the device — all the user control is done via a connected smartphone, tablet or laptop. 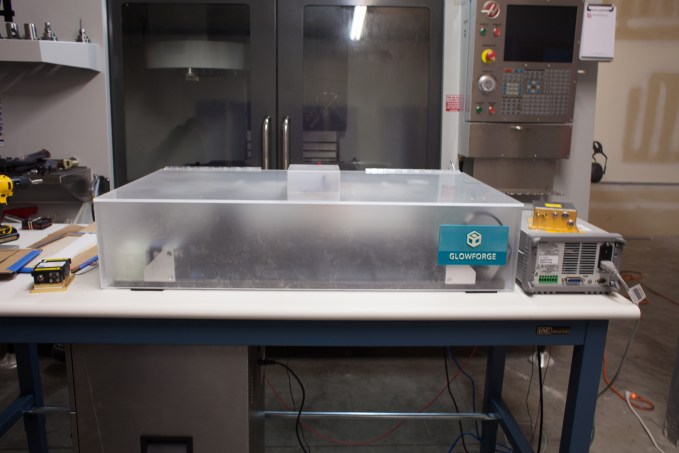 Where additive manufacturing creates 3D objects by building them up in minuscule layers, the team behind Glowforge believes high definition laser cutting is a more appealing and versatile technology for creating attractive objects that you actually want to use or have on prominent display in your home — objects made from materials such as leather, wood and fabric.

“The skill that you need to create 3D printed objects is CAD software. Which is pretty challenging… The software that you need to learn to create laser products is Adobe Creative Suite. Is Photoshop, or Illustrator, or there’s a free version called Inkscape. In fact you can even create with totally bizarre tools not meant for the job like PowerPoint, and cut and engrave straight from those products. So you wind up with a world of people who have the skills they need already to design for this device,” says Shapiro.

And if you’re questioning how many useful 3D objects you can make by putting together a series of 2D pieces, well, just pause for a minute and consider Swedish flatpack furniture giant Ikea.

Examples of what can be made using the Glowforge — via this process of cutting 2D pieces and hand assembling them afterwards — include custom sized leather bags, wallets and fashion accessories; decorative candle holders and other household items made from shaped, filagreed and engraved wood; custom cards and wedding invitations and so on. In other words, the kind of handcrafted objects you might see for sale on Etsy.

Shapiro says part of the team’s market research involved hanging out at maker spaces like TechShop in San Francisco and Metrix Create:Space in Seattle — asking people who were using 3D printers and laser cutters what they were using them for. This led to some interesting observations about relative demand for the two types of machines.

I want to build a machine that competes with Amazon Prime.

“The lasers were being used a factor of 10 times more than the 3D printers,” says Shapiro. “And the most common title of somebody who would use a 3D printer had the word engineer in it. The most common title of somebody who would use the laser had the word designer in it. So we saw people who had Etsy stores — I would say approaching half of the people who were using the laser were using it to help produce something that they were ultimately turning into a commercial product… They were often making designs for their own home, or products for them to use. Gifts were a very popular. 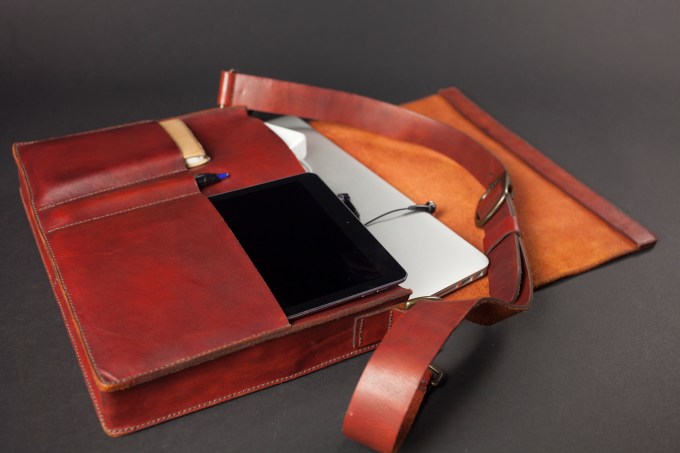 Shapiro notes that the machine is high resolution enough to cut the precise stitching holes needed to make the bag, meaning the maker only has to pass a needle and thread through to assemble the item.

The core idea powering Glowforge, which has been in relatively stealthy development since Spring last year, is to supercharge the maker movement with a machine that will allow designers to quickly turn 2D sketches into attractive, sellable 3D objects — without the need to master crafts like leatherworking, carpentry and engraving.

“That’s what so exciting about the Glowforge; we get to bring this idea of homemade back. something that’s designed exactly for you, out of beautiful materials, that’s extremely high quality, that’s just the way you want it — all the pockets are where you want them and the size just fits — and you do it cheaply and more quickly than going to the store and buying that thing,” Shapiro tells TechCrunch.

“This is something where, if people can afford it, they’ll want it in their homes… We ultimately are building a machine not to compete with 3D printers or to compete with exotic gadgetry — I want to build a machine that competes with Amazon Prime,” he adds. “I want to make it better to make something homemade than it is to buy something from the store. And I think we’ve already crossed that threshold for a whole host of products with the first Glowforge.”

The Glowforge team has convinced a group of investors — including some luminaries from the 3D printer space — that they are onto something. Today it’s announcing a $9 million Series A funding round, led by Foundry Group’s Brad Feld, with participation from True Ventures’ Tony Conrad, MakerBot co-founder Bre Pettis, Jenny Lawton (former MakerBot CEO) and Max Temkin (Cards Against Humanity), among others.

Shapiro, who was previously the CEO of Google Comparison, is perhaps best known for a wildly successful Kickstarter campaign back in 2013, which raised more than $630,000 for a board game designed to teach kids how to code. The game, called Robot Turtles, was initially created for his own kids, but the project gallivanted well beyond his original concept (and is now sold by Thinkfun). 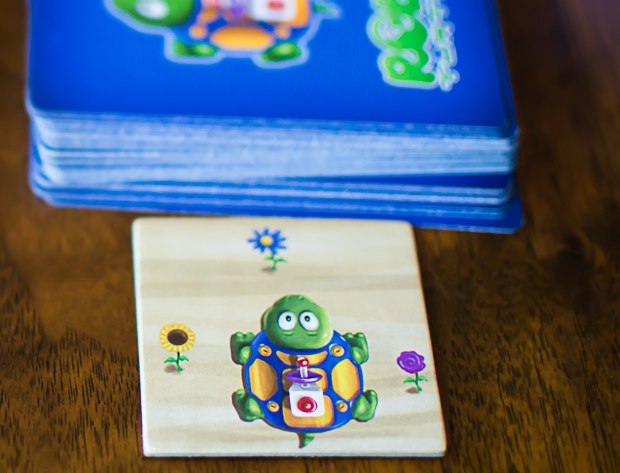 It was the process of creating the first Robot Turtles board game — on his dining room table, with paper and card, an inkjet printer and a laminating machine — that Shapiro says ultimately inspired him to get into building hardware. Specifically he was looking for a way to print 3D turtle pieces for some limited edition Kickstarter backer editions of the board game that got him interested in the technology. And it was the uninspiring plastic product extruded by 3D printers that convinced him a new type of maker machine was called for. And so the idea for Glowforge was born.

“Modern lasers are mostly unchanged since the 80s,” says Shapiro. “So much like Bre Pettis looked at the 3D printers and said ‘wow, these are $250,000 machines that have not really changed in two decades, maybe we can put them on the desktop’, we thought that we could do the same thing with this technology. We could reboot them with smartphone sensors and cloud software which would dramatically reduce the cost of the machine and use the enhanced software and sensors to make it easier to build 3D products with this.

“Whereas traditionally lasers are mostly used for just engraving flat things, or cutting out flat things… we looked at this and said we can do furniture and we can do lamps and we can do handbags and we can do satchels and we can do materials from fabric to cork to hardwoods to leather to all sorts of amazing products that when you’re done result in something you actually want to use.

“Something that looks like what would come out of a store. Something that is better than if you bought the same thing at a Costco, or a Wal-Mart or off of Amazon. And so that’s when we start started to get really excited.”

There are some combination desktop printer machines being developed that promise laser engraving and 3D printing in an all-in-one device, such as the Flux, which raised $1.6 million on Kickstarter last year. The difference with those lower cost lasers and Glowforge is orders of magnitude of cutting power, according to Shapiro.

“There are a new generation of extremely low power lasers that cost $300 to $500, that use the laser diodes that come out of Blu-ray recorders. Those are 2-3 watts. And what they can do is, very slowly they can discolor materials, so they can do engravings — those will take an hour or more to do an engraving — and for extremely thin material, paper or balsa wood, they can even manage cutting.

“Our laser’s about 15x more powerful so it’s the difference between being able to, in the course of an hour, cut out a sheet of paper, or being able to do the same task in 45 seconds and then turn around and cutting the same shape out of walnut or leather or something else. It’s just a very different scale of operation.” 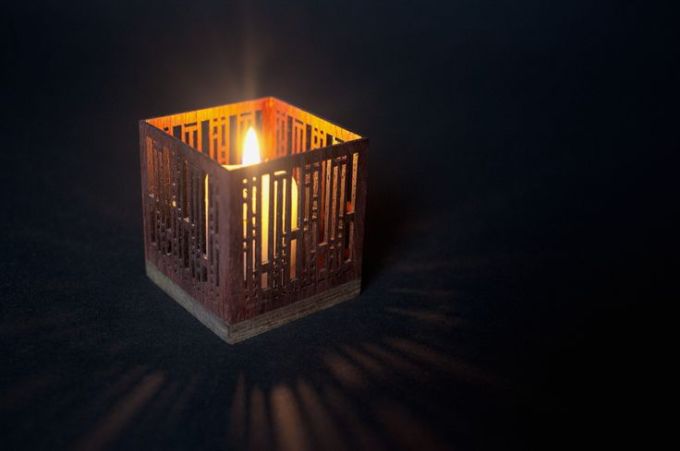 How defensible is Glowforge’s laser cutting tech? Shapiro says the key innovation the team has come up with is moving a large number of functions out of the hardware itself and into the cloud. “We have ripped out huge amounts of hardware from the machine — from a typical laser design, and replaced those with software that we run in cloud servers instead of running locally,” he explains.

One example is the motion controller board used on many traditional laser cutters to translate whatever line the person wants cutting or engraving into a series of electrical pulses that choreograph the motor. Instead of using that type of component, which Shapiro says starts at $400, or even using a cheaper alternative controller like an Arduino, the Glowforge uses cloud software to do the grunt work. “We simply send down the ones and zeros for the motor to the machine over the internet which reduces the cost by a factor of 100,” he notes.

“The thing that’s relatively easy to clone is the hardware, although we have some interesting innovations and patents there, but the place where we think we can really add a great deal of value is in the software,” he adds.

Shapiro and his co-founders had taken in $1.4 million in funding prior to today’s Series A. The new financing will go towards expanding the team with new mechanical, electrical and software engineer hires as they work towards launching the first product later this year. They have not yet decided on a go-to-market strategy for Glowforge — so whether they opt for crowdfunding, or direct pre-orders/sales. Various options are on the table. One thing is for sure though: the scale of Shapiro’s ambition for GlowForge.

And while the price-tag of the initial Glowforge is not at a mass consumer adoption level, the aim is to shrink the cost over time — to make the machine accessible to more and more makers.

“Building off the amazing stuff that’s happened in the 3D printing community to say now we can use these fabrication technologies to build the products of our everyday life. And that’s incredibly powerful.”