The disconnect between American citizens’ desire for privacy and the actions of the U.S. government — and big technology companies — continues. A new survey by the Pew Research Center underlines the extent of the mistrust between U.S. citizens, government institutions and tech services — with less than a third (31 per cent) of American adults expressing confidence in government’s ability to safeguard their data. This is the third in a series of privacy-focused studies conducted by Pew in the wake of the 2013 Snowden revelations of government agency surveillance programs.

“For all of the eleven entities asked about in the survey — from government agencies to credit card companies to social media sites — only a small minority said they are ‘very confident’ that the records maintained by these organizations will remain private and secure,” notes Pew. 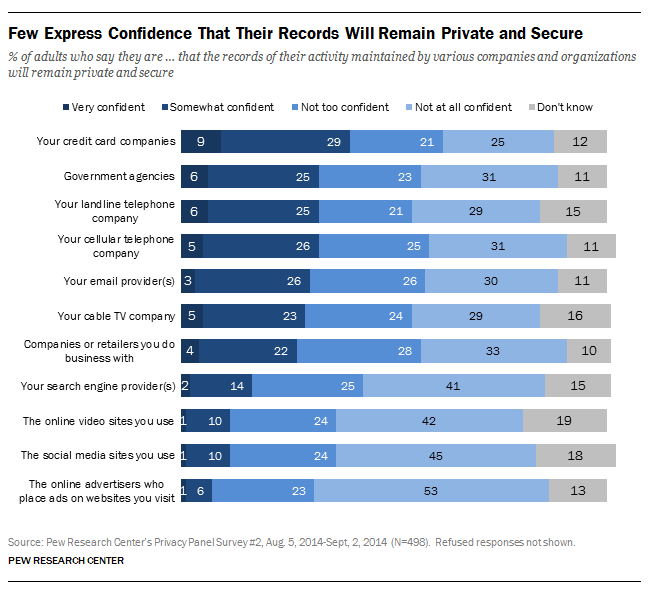 Pew notes that respondents who are more aware of government online surveillance programs are considerably more likely to believe adequate safeguards are not in place; 74 per cent of those who have heard “a lot” about these programs say limits are not adequate vs 62 per cent who have heard only “a little” about the monitoring programs.

The survey also found that most Americans want limits on the length of time that records of their online activity can be retained. A majority (50 per cent) of the adults surveyed by Pew for the research believe that online advertisers who place ads on the websites they visit should not save records or archives of their activity for any length of time.

So those folks must be really unhappy about, for instance, the sophisticated tracking infrastructure (deployed by companies such as TC’s current parent AOL) when they click to accept cookies during a web browsing session — in order to stalk them around the Internet and across their devices with targeted advertising.

A sizable minority (44 per cent) of U.S. adults also believe that online video sites should not retain records of their activity; and a full 40 per cent aren’t at all happy about Google’s business model — believing that search engine providers shouldn’t retain information about their activity. Those folks should really think about switching their browsing activity to DuckDuckGo — if they haven’t already.

According to Pew, just nine per cent of Americans say they feel they have “a lot” of control over how much information is collected about them and how it is used. The largest proportions — of more than a third apiece — feel they have “some control” or “not much control”. Which, given how obfuscated the tracking tech that powers the online ad industry generally is, is really not at all surprising.

A full 13 per cent of Pew’s respondents said they feel they personally have “no control at all” over the way their data is gathered and used.

No control at all.

If that doesn’t sound like a system with some seriously large cracks in it, I don’t know what would.

That sense of consumer powerlessness about being stalked online — doubtless exacerbated by the opacity of commercial ad-fueled tracking infrastructure — perhaps explains why so few Americans are changing their behavior to avoid digital tracking. Bottom line: how do you beat an apparently infinitely tentacled data-sucking octopus that you also can’t see?

Just seven per cent of respondents reported having made changes to their Internet or cell phone to avoid having their activities tracked or noticed in “recent months”, according to Pew. That said, a prior Pew privacy survey found that almost a third of Americans had changed some of their behavior and use of technology in the wake of disclosures triggered by NSA whistleblower Edward Snowden — to try to avoid online government surveillance programs. Which perhaps suggests Americans are more motivated to evade government privacy intrusions than corporate overreach in this space.

Thing is, the Snowden documents have shown governments are systematically tapping into commercial Internet services to harvest vast repositories of citizens’ data. So really, when it comes to the military industrial surveillance complex, all these data-harvesting tentacles are ultimately being plugging into the same centralized surveillance infrastructure. So yeah, no control at all.