DataHero, the SaaS company that wants to bring data visualization to non-technical end users, announced $6.1 million in Series A funding today. It also announced a new chief executive and a partnership with Hubspot.

The round was led by existing investor Foundry Group. The company also announced it was bringing on veteran executive Ed Miller, who has been CEO at several startups with successful exits including Xythos, a content management company, which was acquired by Blackboard Inc.  in 2008.

Company founder Chris Neumann will shift to the chief product officer position when Miller takes over. Neumann said with a fast-growing market and new funding, they thought it was a good time to bring an experienced executive on board to lead the company through its next phases. 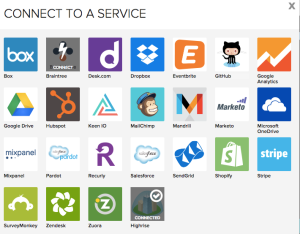 DataHero is software as a service that’s designed to enable non-technical business users to build charts and graphs from a variety of pre-defined data sources such as Salesforce.com, Eventbrite or Box, among others. They can also import internal data sources stored in spreadsheet format, and link multiple sources. Users can then create data dashboards to track various types of information.

Neumann says the premise for starting the company was to give people access to this growing variety data in the cloud (and elsewhere). “We were seeing people want to make sense of data as the rely on it more,” he said.

Neumann seemed reluctant to use the terms “cloud business intelligence (BI)” to describe his company’s service, but suffice it to say it’s a product, not unlike Salesforce Wave, that lets users select data sources, then choose the types of data they want to visualize, and finally, quickly build charts and graphs to visualize that data.

He says this is particularly useful because as companies use more cloud services, ever smaller groups of users require access to specific types of data, and they can’t always get the attention of IT or business analysts to get the information they need.

For example, say you’re on the company events management team, you might want to look at an event’s signup data using Eventbrite. As Neumann pointed out, that’s typically only a handful of people. In the past, using traditional business intelligence and data visualization tools, it would be hard for a small team to get the attention of IT or data analysts to visualize the data they get from the service.

Anyone can sign up for a free two-week trial of DataHero and there is a free version. After that, there is a big leap from the free plan to $59 per month for an individual user or $89 for a Team account.

Neumann said to-date, most users access the service on a desktop or laptop or on a tablet. He says they haven’t seen much smartphone usage so far.

In addition to the funding announcement, DataHero also announced a deal with Hubspot to let customers see Hubspot data in conjunction with data from other services. Under the terms of the agreement, agencies using HubSpot with their clients can access DataHero at a reduced price.