It was an interesting day at AOL.

As you probably saw, Verizon has reached an agreement to acquire AOL for $4.4 billion. There’s a general feeling that this deal was mostly about AOL’s ad business (Verizon’s John Stratton said “the principal interest was around the ad tech platform“) — so what does that mean for the websites that AOL owns, including The Huffington Post and (gulp) TechCrunch?

Well, Re/code’s Kara Swisher is reporting that AOL has been in talks to spin off The Huffington Post. I had a quick interview with CEO Tim Armstrong (who’s supposed to continue leading AOL after the deal), and he didn’t entirely rule that out as possibility: “We get approached to do things all the time,” he said, and it’s his job to “keep all the optionality at the table.” (It’s similar to what he said when I asked him about acquisition rumors earlier this year.)

But Armstrong added, “One optionality I wouldn’t keep on the table is — we’re going to be in the content business, we love the brands we have and if anything we’ll probably add more and more heft to our content business over time.”

You can read an edited version of our conversation below. I’d like to think I kept our interview largely focused on the news, but a little bit of CEO-employee interaction crept in at the end there — after all, it was also my chance to ask my boss’ boss’ boss’ boss about what’s going to happen to TechCrunch.

“TechCrunch is not getting sold off,” he said. “There will be editorial independence. And from a distribution and resource standpoint, it’s probably the most exciting deal we could have done.” 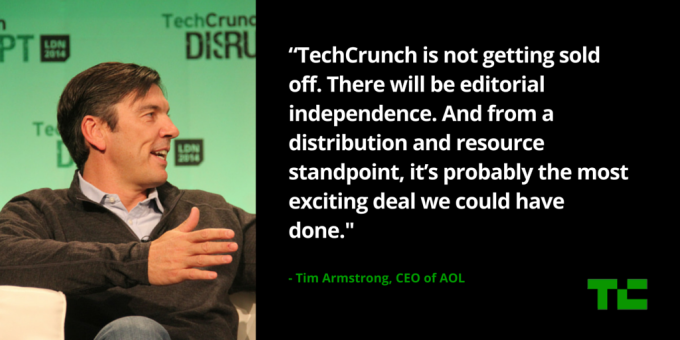 TechCrunch: You’ve talked about this as a content deal and as an ad tech deal. All the analysts, all the tech press see this as fundamentally about ad tech. How do you respond to that? What do you feel that they’re missing?

Armstrong: I think they’re missing a couple of really big things. One is, basically, content is the differentiator. What I’ve always talked about is the barbell strategy of having rich deep content on one side and platforms on the other. If you look at Verizon’s strategy, Verizon’s essentially been doing it at a different scale than us, but they have basically invested in things like NFL content. And on the other side they’ve invested in things like the video content delivery network and other things they own.

On the platform side, you look at Verizon, Verizon’s been mobile and OTT and video at mega scale, and we have been the same thing on the Internet side at big scale. Putting them together basically combines the two barbells.

TechCrunch: Are you exploring selling off or spinning off The Huffington Post?

Armstrong: No. Right now, basically, we’re going to finish the Verizon deal. Over the course of time, I’d say over the past two or three years, people are really interested in many of our assets. Many of them have gained tremendous value — if you look at The Huffington Post, it’s gone way way up in value overall. It was a 20 million person blog, it’s now over 200 million users, it’s in 15 countries, it’s got HuffPost live, it’s got video. TechCrunch was a Silicon Valley blog, now it’s a global media property and events property.

TechCrunch: It sounds like what you’re saying is, you can’t rule out individual deals, but AOL is not getting out of the content business.

The easiest way to think about this is, the deal we did today also gives us the ability to scale our strategy and Verizon has the same strategy, so you should assume everything we’ve been doing strategically, we’ll only do faster now.

TechCrunch: Do you feel like this accomplishes what you set out to accomplish when you joined as CEO five-plus years ago?

Armstrong: The note I sent out to the team, right after it got done, is: Now we can get started. I think the first five years here were really about spinning out from Time Warner, reshaping the company, getting on strategy, investing behind it, taking some risks and chances. I would say that the long-term strategic area we ended up in is exactly where we hoped to end up.

And each one of those smartphones is going to get smarter, and they’re going to turn into machines, and you’re basically going to have 4 billion people walking the planet with cable boxes in their pockets. That’s what I’m excited for. That’s why I’m here, that’s why I think the Verizon deal is a good idea and that’s why I think we’re just getting started.

Armstrong: I signed a contract with Verizon, a long-term contract. I’m staying, I told them I’m staying, they’ve told me they want me to stay.

TechCrunch: Can you say how long-term the contract is?

TechCrunch: Is the deal at the point where AOL would not entertain other offers? There’s speculation that there could be a bidding war with other companies.

Armstrong: Our board has decided to do the Verizon deal because they felt it was right for shareholders. If you look at our track record with shareholders, we basically beat the S&P 500, based on this deal, for the last five years. We returned cash to shareholders, we shrunk the equity base, we’ve been a very very shareholder-friendly company.

This deal, we feel, is the right deal to go forward. In the go-forward scenario, we plan on doing the deal with Verizon — and as a public company, there are fiduciary obligations. But our goal, plan and what we’re working towards is the closing of this transaction with Verizon.

TechCrunch: Anything more you want to say about what the deal will mean for TechCrunch specifically?

What’s the reaction [from the TechCrunch team]?

TechCrunch: It’s a wait-and-see approach. If this means more resources and distribution, great. But [nervous laugh] editorial independence is important to us and hopefully we don’t get sold off to somebody else in a few months.

Armstrong: TechCrunch is not getting sold off. There will be editorial independence. And from a distribution and resource standpoint, it’s probably the most exciting deal we could have done.