If you’re looking to meet new people but don’t want to explicitly commit to it being a date, as on Tinder, a new app called Wiith wants to help. The social app aims to connect nearby people who share the same interests and have them join up for local activities and events – like a more informal version of Meetup, perhaps.

The idea that the younger, mobile generation feels more comfortable connecting via apps and technology rather than in-person conversations is something that’s been tested before. A number of “Meetup”-like apps have launched in the past, but they’ve so far failed to topple the older social site Meetup.com which today still has over 21.5 million users, and hosts nearly 200,000 groups in local communities.

That said, there’s still an opportunity for someone to rethink the Meetup model for the more spontaneous, Tinder-swipe-filled mobile age. After all, Meetup has only recently begun to shift its business to mobile, having added in features like messaging or crowdfunding for group needs just this past year. Whether or not Wiith will be the one to figure it out, however, still remains to be seen.

As Wiith co-founder Jeff Hodnett explains, “Meetup just isn’t right for natural encounters – it’s too rigid,” he says. “We think Wiith is a lot more spontaneous than Meetup, along with not having the dating stigma of Tinder.”

Adds Wiith co-founder Gentian Edwards, who had the initial idea, “I wanted to build Wiith to solve a problem of meeting new people that I found.”

Hodnett and Edwards teamed up to build Wiith in their spare time to solve the problem they both had faced as new arrivals to the Bay Area. The two had first worked together at a digital agency in London in 2010, building iOS products for big brands like Harrod’s and Stella Artois. Hodnett later relocated to San Francisco in 2012 to work in the startup industry and Edwards followed a couple of years later.

But beyond helping new arrivals make friends, the app could work for those who are just visiting a new city, too. You’ll often see these sorts of profiles on Tinder, where the person explains they’re just looking for someone to have a drink with or share a meal, for example. They’re not necessarily looking for a proper “date” and certainly not a short- or long-term relationship.

“For me, I know when I go to a new city I find myself spending way too much time in the hotel room as I don’t know what’s happening around me, and sightseeing gets boring on your own,” notes Edwards. 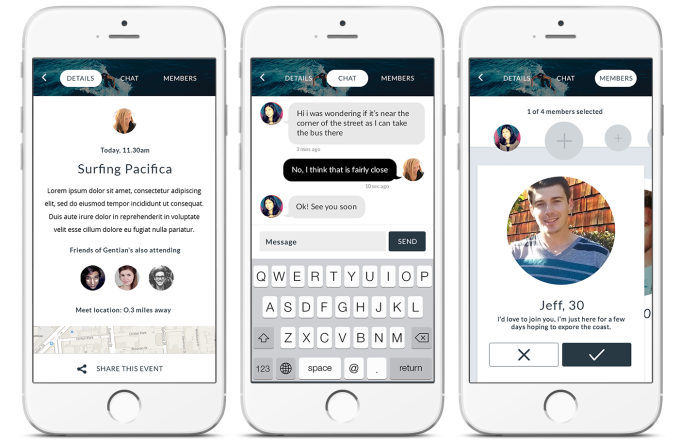 On Wiith, users can create or join others’ posted events. Plus, those who create the event can also choose who gets to attend by approving or declining applicants – something that gives Wiith a Tinder-like feel to it. These events can be added on the fly, or scheduled out for a later date. The app also lets users follow other people of interest and receive notifications when they suggest a hangout, as well as receive event suggestions when it’s quiet.

There’s a good idea in there – to loosen up the Meetup model, while riffing on the hot-or-not selectivity that Tinder allows for – but Wiith today is still too sparsely populated to be useful just yet.

In other words, the app offers the infrastructure, but hasn’t built the community.

Today, there are just over 1,000 users, mainly in the San Francisco Bay Area and the Peninsula, on Wiith. The founders are hoping to convince some “influencers” to use its app for their upcoming events as a way to gain traction alongside other more conventional marketing methods.

Wiith is currently bootstrapping as it tests how the market reacts to its product, but Hodnett says that so far, they’re happy with the user retention numbers they’ve seen.