Zynga reported its first-quarter financial performance today following the bell, sending its shares skyrocketing as investors cheered its revenue beat and plans to cut around 18 percent of its workforce, or more than 300 people.

Zynga had revenue of $183.3 million in the quarter, and bookings of $167.4 million ahead of investor expectations of a slimmer $147.7 million. The company’s adjusted loss of $0.01 was better than expectations of a larger-than-expected $0.02 loss per share. On a GAAP basis, using normal accounting techniques, Zynga lost a steeper $0.05 per share. 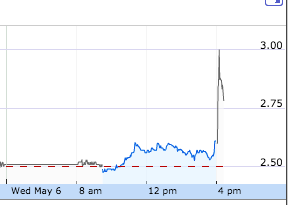 The company’s revenue beat has helped send its shares north more than 10 percent in after-hours trading. Helping to fuel that pop is the company’s stated $100 million plan to cut costs. That reduction in expense is predicated on a plan to fire a large percentage of its workforce. The company was blunt in its release (emphasis mine):

Today, Zynga announced a cost reduction plan expected to generate pre-tax savings of approximately $100 million, excluding an estimated $18 million to $22 million pre-tax restructuring charge in the second quarter of 2015. As part of the plan, Zynga expects to complete a reduction of approximately 18% of our current workforce across its studios, including contractors, and implement additional cost reduction measures, including lowering costs and eliminating spend on outside and centralized services.

The company expects to save more than $40 million per year from the layoffs, with the firings wrapping in the fourth quarter of 2015. That dollar figure is roughly equivalent to the company’s first-quarter net loss, using standard accounting techniques.

A reduced cost structure, a revenue beat, a return-of-the-CEO, and new games are a formula that investors appear to cheer. For the employees that get to stay, Zynga seems healthier than it has in some time. For the employees whose exit will lead to the financial structure that might help the company work towards GAAP profits? Well, it’s different.

Zynga is a company famous for its early work on the Facebook platform that missed the boat on mobile. However, the company, not unlike Facebook itself, has picked up the mobile game: In the first quarter, Zynga generated 63 percent of its bookings from mobile. As the company said, that figure is up 84 percent from the prior year. The result of the result is that Zynga can call itself a mobile company without blushing.

It’s a good quarterly result for — most — of Zynga. And about time at that.