A number of startups, including Magic, Operator and GoButler, are focusing on fulfilling customers’ commerce-related requests which are sent in via mobile app or SMS requests. But today, rival mobile shopping assistant Fetch is tackling a new platform with the release of its Apple Watch app. Now more of a mobile “concierge,” Fetch will allow Watch owners to order any product, on-demand service or make travel reservations, right from their wrists.

For example, customers could ask the Fetch app to order them a pizza, send flowers to someone, buy a movie ticket, book a last-minute hotel room, find a mechanic, schedule a doctor’s appointment, make dinner reservations, or even order another item for same-day delivery.

Essentially, it’s the combination of a personal shopper, virtual assistant, and travel agent, all rolled into one, explains Fetch CEO Tom Hadfield.

Using the app is simple enough. After installing it to your Apple Watch, you just tap the microphone icon to speak your request. This request is then picked up by one of Fetch’s 58 concierges, who are people trained and specialized in areas like travel, wine, shoes and more. Meanwhile, Fetch augments their capabilities using technology like natural language processing, to process requests, and by pulling in pricing for items via APIs.

“We believe the future is ‘AI plus human,'” notes Hadfield.

Fetch’s app returns the results of the requests to mobile users, offering them a quick way to complete the task at hand. For instance, as you can see in the photo below, when the Fetch app found airfare pricing, an Apple Watch owner just has to tap the “Book Now” button to buy their plane ticket. 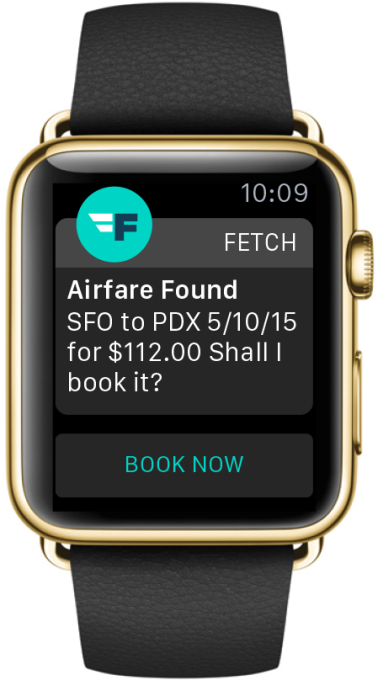 The payment capabilities in the app are powered by Apple Pay and Stripe, and the company also partners with other service providers to help it fulfill various requests. Like some of its on-demand competitors, Fetch works with services like Postmates and Instacart for same-day deliveries, as well as with Homejoy and Handybook for housecleaning, with Washio and Rinse for dry cleaning, and with a variety of services like DoorDash, Caviar or GrubHub for food deliveries, and many more.

However, where the service differs a bit from some rivals is in its business model. Magic tacked on extra fees to help it generate revenue, while Operator is instead focusing on scale first ahead of revenue. Fetch, on the other hand, doesn’t add extra fees but does take advantage of affiliate programs, if available. Plus, the company is working now to finalize a number of special fulfillment partnerships with retailers and suppliers in order to increase commissions.

In addition, though the service is free to use for the time being, the company plans another path to revenue by way of a premium subscription offering arriving next month. The pricing for this tier is still yet to be determined, but it will include faster response times and more personalized service, says Hadfield.

Fetch works anywhere in the U.S. by plugging into whatever local providers are available in that area, so it’s not limited to only major urban markets as some in the on-demand industry are currently.

Until today, Fetch was offered by way of an iOS app, Android app, or by texting “FETCH” (33824) with your requests. The company was early in the space, having first launched at TechCrunch Disrupt NY 2014. It later expanded to include support for things beyond personal shopping, such as booking flights and hotels, buying tickets, placing orders for food or flowers and more.

The Fetch Apple Watch app is live now as an update to Fetch’s iOS app on iTunes.