WhatsApp’s new voice calling feature for iOS is decent quality and easy to use, but the experience doesn’t beat dedicated VoIP apps for clarity. At this point, at least.

That’s our early take on the free calls feature that the Facebook-owned service began introducing to its iOS app this week. Already live to all users on Android, free calls are slowly rolling out to Apple device owners — but TechCrunch managed to sneak in early and road-test the feature today.

WhatsApp’s new feature has the potential to cause serious headaches for operators in markets where the messaging app is popular, such India and chunks of the Middle East, Europe and Latin America. (The service may have 800 million monthly users, but that doesn’t mean global domination, as I explained earlier this week.) WhatsApp is one of a number of messaging apps to ravage telco’s SMS revenues after collecting hundreds of millions of downloads worldwide. Indeed, the number of messages sent on WhatsApp alone each day is 50 per higher than global SMS volumes.

Despite all that potential, we — and the people we spoke to — found the quality of calls to be fine, but not on the same level as dedicated calling apps like Viber. Personally I found it to load faster than Skype, which is a real bonus. However, the calls felt like free international phone calls, which is exactly what they were. That’s unlikely to bother most people though.

WhatsApp is slowly rolling the feature out — as it stress tests the additional load that its hundreds millions of users will add to its network — so call clarity and quality may yet improve over time.

The actual process of calling via WhatsApp is easy.

There’s a prominent icon at the top of your ongoing chats, while you can hunt that person down in your contact list, where you’ll find a call icon next to the chat button. As with other VoIP calling services, making a call takes over your phone screen with a ‘WhatsApp call’ label in the top left corner. 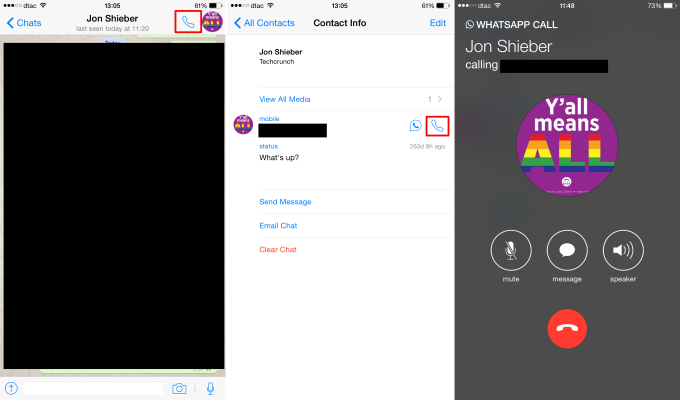 Receiving a call is just like a normal call too — it even uses your phone’s default ringtone.

Interestingly, calls from people who are not among your contacts show up as ‘unknown’ with no number displayed. That’s good from a privacy perspective for people making calls, but less than ideal for those who receive them. 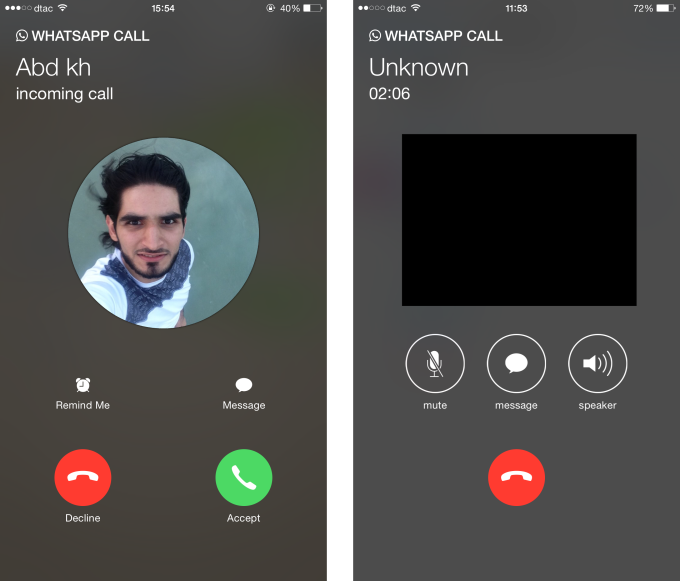 Free calling and texts have become commoditized by the large number of chat apps that offer them, but WhatsApp is still lacking in one obvious area: user IDs.

Giving out your phone number is the only way to connect, and that is a risky business. In the event that the person becomes a nuisance, merely blocking them on WhatsApp doesn’t stop them from being able to reach you.

Dedicated IDs would give WhatsApp users more control over their privacy. Now that calls are coming to iOS, I’d expect to see this feature arrive soon. That would bring WhatsApp on par with other messaging apps that have long offered user IDs, such as Telegram, Line, Kik and Kakao Talk.

If you’re an avid WhatsApp user who is desperate to get this feature, you’ll need to find a person who already has calls enabled and get them to phone you. Once your call with them is finished, simply restart WhatsApp and — hey presto — you should now have the feature.

Thanks @abd_kh for hooking me up with calls!