As a number of early customers will receive their Apple Watch smartwatches today, Apple has also begun to send out email invitations offering “personal setup” appointments that take place via video sessions with an Apple Specialist. The sessions allow customers to learn about their new device and be walked through its features, as well as have the opportunity to ask questions.

Specialists will also be making app recommendations, the email says, and will help customers personalize their device.

What’s interesting is that initially the virtual personal setup appointments were rumored to only be offered to those buying either of the two higher-end smartwatches: the Apple Watch and the Apple Watch Edition. These customers were to be offered virtual “try-on” experiences ahead of purchase, which would then be followed by the setup sessions.

Sessions are available in the morning, afternoon, and evening hours, and currently have availability through May 7th, though many of the early time slots are already filled. The online form also allows customers to indicate what specifically they’re looking to receive help with when their appointment time rolls around. 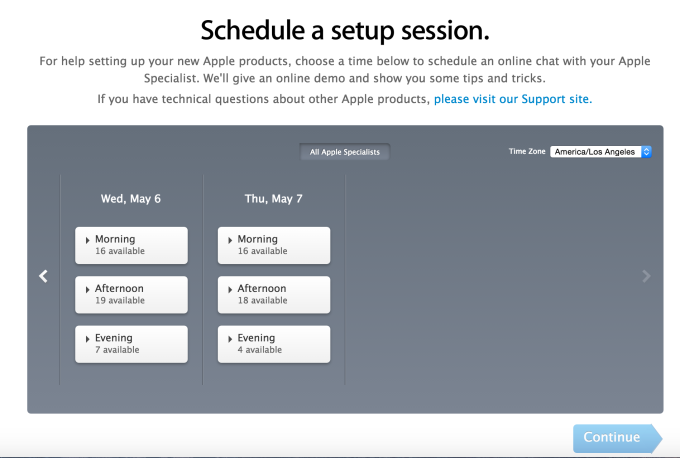 The online appointment is basically a virtualized extension of the personal setup sessions already offered in Apple’s retail stores, but are indicative of the company’s ongoing shift with regard to its Apple Watch launch, and ultimately, its sales strategy as a whole. Apple now moves customers to the e-commerce channel for sales and support, rather than encouraging the usual out-the-door line-ups for Apple product launches.

As Apple retail chief Angela Ahrendts explained in an internal email memo to retail employees, the “days of waiting in line and crossing fingers for a product are over for our customers,” she said. Instead, Apple wants to customers to use its Apple Store app and its online store for their orders, which Ahrendts noted would require “a significant change in mindset.” 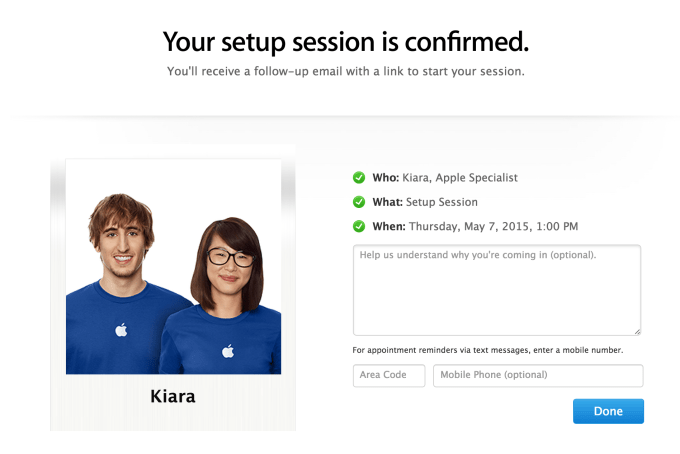 To make that transition more seamless for customers, Apple is offering customers the ability to engage face-to-face like they’re used to in Apple retail stores, but from the comfort of their own home. Not only does this help the often over-crowded retail store staff focus on addressing more urgent customer needs like repairs, or free them up to host more classes or spend more time with shoppers, it also means Apple can scale its customer support business to reach more customers, including those who don’t live close to a retail store.

Initially, the Apple Watch launch appeared to suffer from supply constraints as many customers who missed the pre-order window on April 10 were given shipment dates in May or even June. But for many, this ended up as a case of Apple under-promising then over-delivering. Much to their surprise, some customers began receiving shipment notifications this week that their Watch would be arriving earlier – in some cases months earlier – than expected. Now those customers can forgo a trip to their nearest store, and instead use the online channel to have their early questions answered.