“The readers lives a thousand lives before he dies. The man who never reads lives only one,” said Westeros visionary Jojen Reed.

Reed, however, did not have a smartphone, which meant he could not download MyIdol. Created by a company called Avatarworks in Xiamen, China, MyIdol is an app that lets you live a thousand lives before you die, and then makes you want to die.

For the past 14 hours, an interminable stretch of time on the Internet, images created by MyIdol, which lets you visit Uncanny Valley by uploading a photo of yourself and superimposing it on digital avatars, have flooded social media, forcing you to confront what everyone you know, including people you are related to, would look like as strippers.

I’m so dead 😭😭😭 what the heck is this app and how did I become a stripper?!? #myidol #exoticdancer #dead #imdone pic.twitter.com/Xuw3YrECXj

What’s harder to pin down is exactly how MyIdol became the latest viral sensation. According to App Annie, the highest rank MyIdol managed to achieve initially after its February 15 launch was number 42 in the U.S. iOS App Store’s social networking category was number 42 on February 18, before plummeting to a low of 1,447 on March 19.

Then it started gaining a new wave of attention about a week ago and broke into the U.S. App Store’s overall rating yesterday, where it now sits at number 2 (it’s also currently the Entertainment category’s number one app). 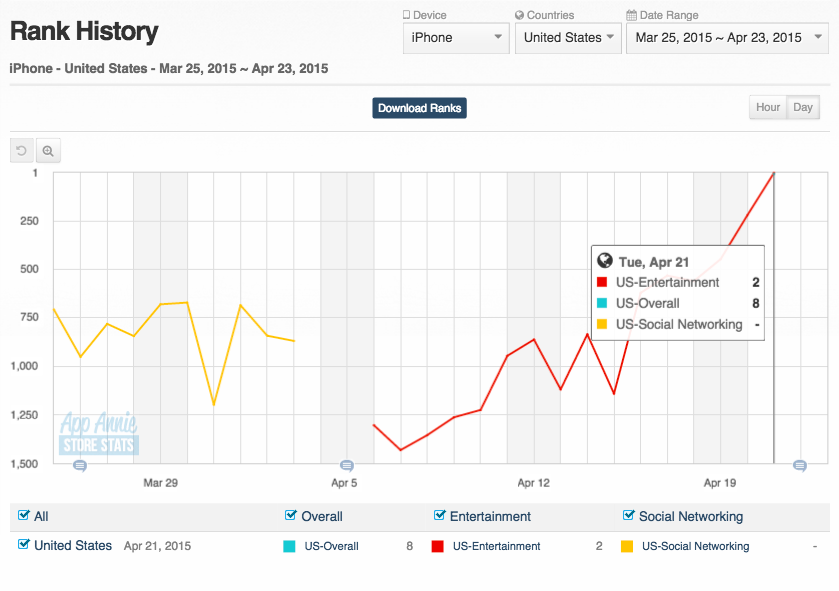 While it is unusual for a Chinese-language only app to breakout in Western markets, it’s not unprecedented. In October 2013, MomentCam—which, like MyIdol, also lets you do weird things to your face through the magic of photo-editing before sticking it onto a variety of bodies—enjoyed a similarly meteoric rise.

It would be equally trigger-happy and unfair to accuse MyIdol of rigged rankings. The app is easy to use and its avatars are not only creepily accurate, but also allow you to tap into the online zeitgeist—and the darkest corners of your raging id.

I’ve always wondered what I would look like as an extremely sexy 80-year-old. Before, I had to resort to an elaborate setup that involved a 8”X10” headshot of myself, onion skin paper, a model skull, forensic science, and hours of tracing with Copic markers to produce sketches I could only hope are semi-accurate predictions, but now all I need to do is take a selfie with MyIdol.

Of course, it’s hard to tell how long MyIdol’s appeal will last before its FOMO wave runs out (MomentCam is currently ranked at 207 in the U.S. App Store’s photo and video category). TechCrunch has contacted Avatarworks to ask what MyIdol’s future plans are and will update this post when they respond.

Until then, happy Sexy Backing.