Earlier this week, I had a chance to meet with PlayStation R&D senior director Richard Marks for a hands-on demo with Project Morpheus, Sony’s attempt at making a virtual reality headset.

I got to try two demos during my time with the headset. The first was a simple intro experience, giving you a fun scene to look at that reacted based on your gaze. It then moved on to a scene that was more of a fun loop of input and sensory experiments than a game, taking advantage of the DualShock 4 controller’s motion sensing and touchpad to interact with PlayStation’s cute robots more directly.

One of the fun things Sony’s experimenting with is positional audio — when you move objects around that generate sound, like an in-game cell phone, the sound moves around in your headphones. 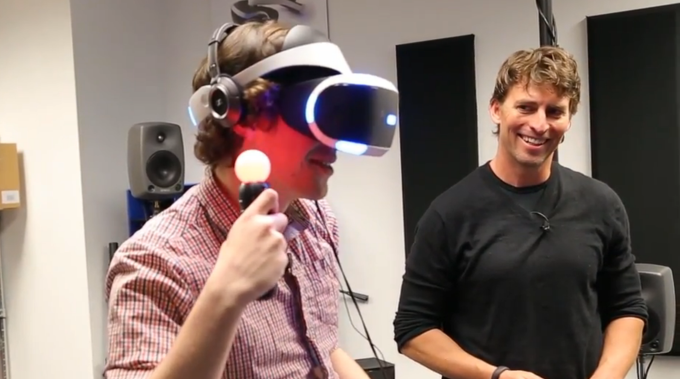 Sony clearly understand the importance of sound when immersing a player in a scene.

The second demo felt more like a traditional game experience. In the first scene, an intimidating dude with a blowtorch makes obscene threats that serve as reactions to where you look in the shady garage you seem to be trapped in. In the following flashback sequence, you use the PlayStation Move controllers (which look like Wii controllers, but with colorful orbs on top so the camera can track them) to interact with the drawers on a fancy old-fashioned desk. Inside the drawers, you find magazines and a gun, and when you solve a quick puzzle, the scene turns into the most immersive arcade shooter I’ve ever played.

You play this segment standing up, but quickly realize that leaves you vulnerable to gunfire. As enemies poured into the room I dropped behind the desk, and instead of pressing a button to move in and out of cover, I could peek up to see if enemies were exposed. There wasn’t a visible cross hair in the demo — instead, you really have to aim down the sight of your handgun.

Unlike its competitors, which require a high-end computer or have you drop-in your phone, Sony’s headset is powered by the PS4. The latest PlayStation is essentially a mid-tier gaming PC from 2013, so based on my time with Oculus dev kits I guessed going into the demo that performance might be an issue — in every VR demo I’ve gotten to this point, the headset was connected to a PC with a GPU notably faster than that in Sony’s console. In VR, low frame rates or inconsistent tracking can make you nauseous, so I’d definitely notice if the PS4 wasn’t able to handle it. 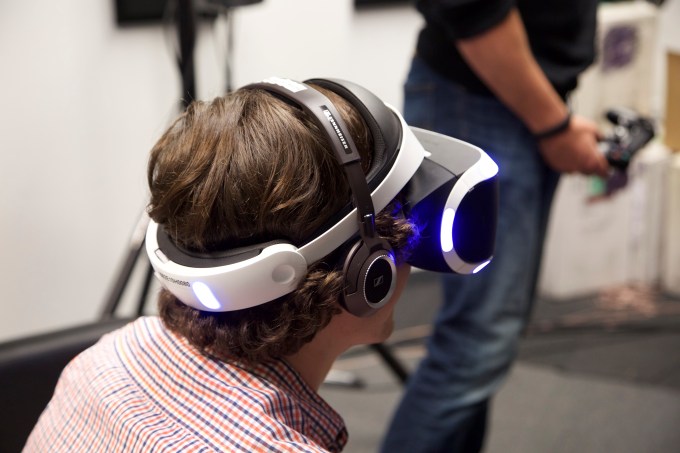 The headset is bulky, but distributes its weight comfortably around the top of your head. You can also use any headphones you’d like.

It turns out that with clever lighting and smaller environments, the PS4 doesn’t have trouble rendering VR experiences that look like modern games without stutters. And whereas those watching someone play a game in Oculus either can’t see what the player is looking at, or it’s shown on your monitor as the same split image sent to the headset, Sony actually renders a version of what the player is looking at on the TV the PS4 is connected to as a full-screen image.

The first demo I played was even rendering at 120 frames per second in the headset — way past what you see on VR demos powered by phones or on older Oculus dev kits. I have a feeling we won’t get huge open worlds in the first generation of games made for Project Morpheus, but Sony’s first-party studios show the console can handle VR. This smooth rendering, combined with head tracking from the PlayStation 4’s camera, led to an experience with few moments where my movement didn’t line up perfectly with what I saw in the headset. 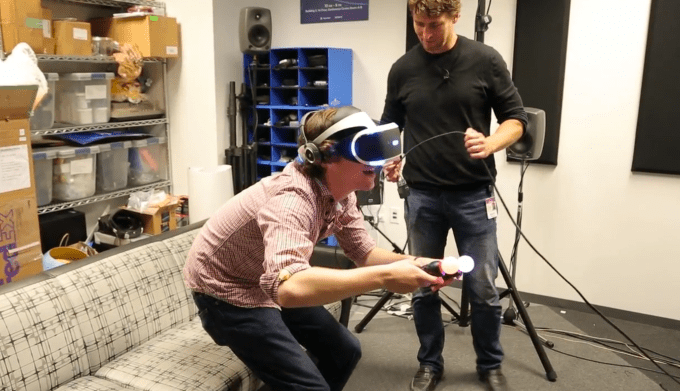 I can see how it looks, but you don’t feel like an absolute dork as you play.

As fellow TechCruncher Greg Kumparak noted a year ago, the fact that PlayStation’s been working on its Move controllers for more than half a decade gives it a huge leg up in terms of providing immersive control. While Valve and HTC’s headset also has motion-sensing controllers for each hand that work rather well, the Oculus developer community relies on an assortment of different control schemes, from controllers to cameras watching your hands. Sony’s going to be able to cut through the confusion and offer a standard package that developers can build for, saving time and resources.

On the other hand, Oculus’s focus on seated gameplay means the wire strapped to your headset doesn’t get in your way. Like the HTC Vive, Project Morpheus lets you stand up and move around (in a limited space, mind you), and that means that tripping over the wire is a potential issue. Dr. Marks had to hold it aloft to keep it out of my way, and in a demo of the Vive, I had to wear a harness to keep its cable away. I don’t think this is a huge hurdle for either device, but “fell down while in VR” might become the new “threw a Wii-mote through the TV.”

With more than 20 million PS4s already in people’s homes, Sony has a larger addressable market than competitors relying on PC gamers with high-end machines.  I think Sony has nailed the headset and software experience with Morpheus, cutting out a lot of the frustrations involved with headsets currently on the market. The biggest factor to watch for now is content — if Sony can line up interesting games, Morpheus could be the device that convinces millions they need VR in their living room when it launches next year.