Despite the shift away from paying with cash or check in favor of digital transactions in recent years, many smaller organizations, and even schools, still rely on old-school methods when it comes to collecting money from groups. Though it’s a hassle for both the organizer and the payer in the long run, checks are often easier than pointing users to online tools like PayPal or setting up websites with payment mechanisms built-in solely for the purpose of a one-time fundraising campaign, for example.

A company called Cheddar Up wants to offer an alternative for group payments, while still making the process as simple for both parties as collecting checks or cash.

The idea for the startup originated back in 2012 from two Denver-area professionals, marketing manager Nichole Montoya and branding and design expert Molly DiCarlo. Both mothers themselves, Cheddar Up began as many startups today do – with the founders looking to solve a personal pain point.

“I was continually writing checks to my kid’s school, and being a working mom, it was slowing me down…it was really arduous.” explains Montoya. Like many parents, she and others had to often pull out their checkbooks to contribute to a number of school-related organizations or campaigns, ranging from paying PTA fees to collecting funds for teacher gifts.  “I realized there was a gap here, and it would be great if there was a tool to collect money from groups that was created to be flexible and robust so that schools would use it,” she says.

The team began building Cheddar Up in late 2012 and launched it a year later, largely as a proof-of-concept which spread by word-of-mouth at local schools where early testing began. To date, the service has grown to 19,000 users, including organizers and those paying their fees online, even though the platform until just this week was not fully mobile-optimized and still relied on PayPal as the means for collecting payments.

But with the updated platform, Cheddar Up now allows its users to pay directly via its own service, either by way of an e-check or a major credit card. Plus, the website has been improved with a number of smaller updates and is now fully responsive so it works on mobile devices. 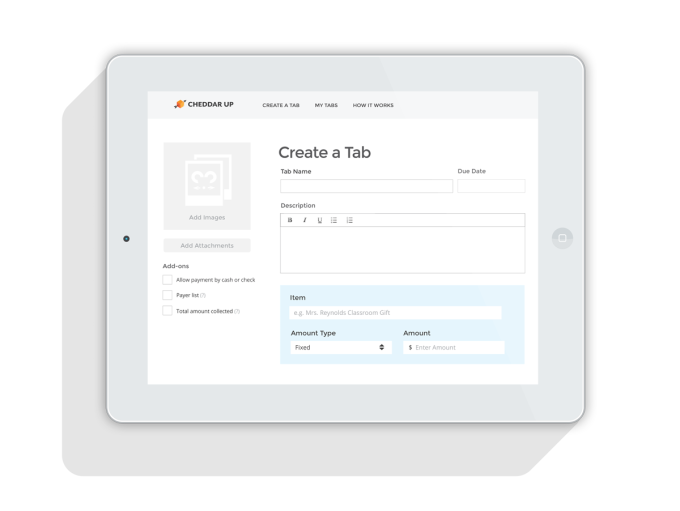 Using the system is simple. Organizers begin by creating their own custom payment page, which can be configured to collect either a flexible donation amount a user enters – such as in the case of a fundraising campaign – or it can be set up to collect a fixed fee. The page can also be customized with a logo, and it can be used to collect personal information as well, in lieu of a paper form.

That’s made it attractive to schools looking to collect fees for things like graduation gear or parking, for example, or for school organizations like the PTA.

After the site is created, the organizers are given a custom URL they can place on their website, send out in a newsletter, or share however else they choose.

Those paying just have to click the link, enter in their information and pay – no paper check required. 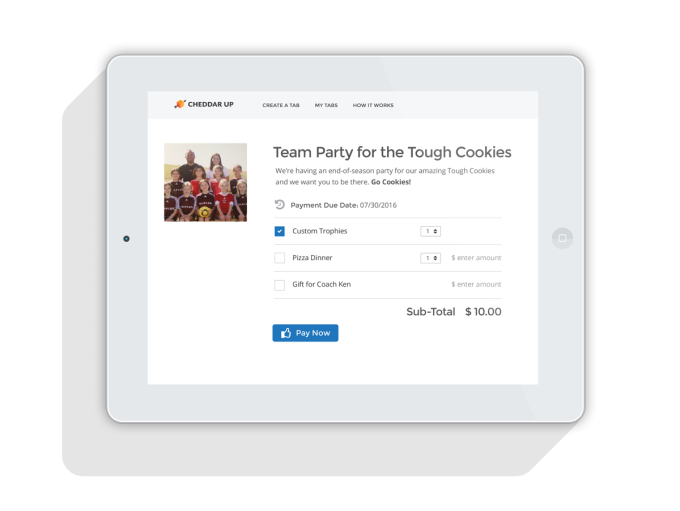 The service includes a credit card processing fee of 2.9% plus $0.30 per transaction, which is fairly standard, and Cheddar Up takes a percentage of that to generate revenue. Schools in particular like that the service allows them to pass the fees onto payers as an option, instead of having to eat the fees for themselves.

The startup is also soon rolling out a subscription tier for power users as well, which will allow them to white-label the Cheddar Up service with their own branding, among other things. While pricing is yet to be determined, it will be under $20/month and will include support for recurring payments, multiple admins and will include a slightly reduced credit card processing fee.

In addition, a native mobile application will debut this fall, just in time for back-to-school, Montoya notes. 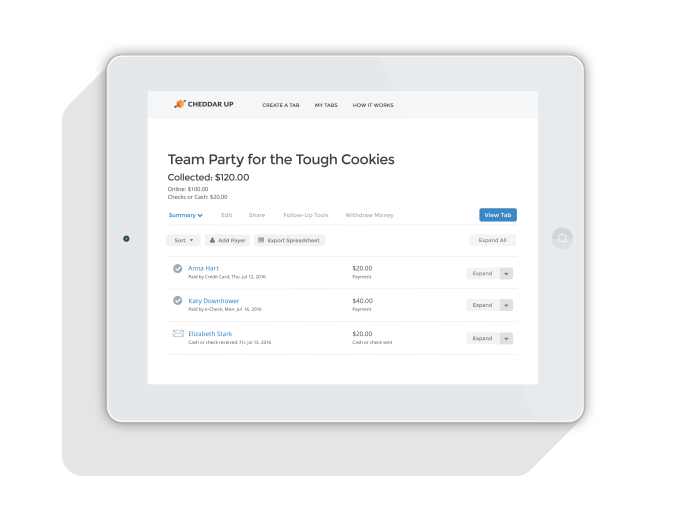 Cheddar Up recently closed on $725,000 in seed funding from Foundry Group Angels, Hedgewood, 500 Startups, and other angel investors, and plans to expand its small four-person team as a result.