With app stores being as crowded as they are, understanding mobile distribution and the app economy is more important now more than ever. And in less than two weeks, we’ll sit down with App Annie’s new head of research Danielle Levitas and Sequoia Capital’s Alfred Lin at TechCrunch Disrupt New York.

Since discovering AppAnnie, I’ve used it relentlessly to discover new upcoming apps, find out which ones are starting to fall off a cliff and keep tabs on general trends in the App Store.

But reporting aside, App Annie has a whole suite of tools for app developers and companies. And it turns out there’s a huge business behind measuring the usage and performance of mobile — the company raised $55 million in a funding round earlier this year, which included Sequoia Capital.

Levitas joined at the beginning of April as the company’s SVP of research and analysis. That team is tasked with divining insights and trends from the wealth of mobile app activity — for both free users and the company’s paid subscribers. Prior to App Annie, she spent 20 years in the industry as an analyst and most recently, group vice president and GM of IDC’s Mobility, Digital Media & Consumer research team. 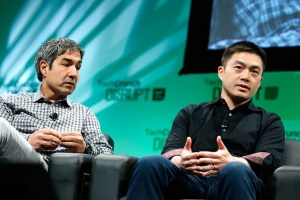 She’ll be joined by Lin, who sits on the board of companies like Airbnb and Houzz, and before that he was the chief operating officer of Zappos until 2010.

The term “frothy” is thrown around a lot in the venture community these days. And it’s for good reason: more than ever startups are raising massive funding rounds at even more massive valuations. (Just look at Zenefits, which could hit a valuation more than $3 billion that’s just a little more than two years old.) Sequoia has invested in plenty of so-called unicorns — like Dropbox, Square and Evernote. But they also invested in a mobile messaging startup called WhatsApp that ended up being bought by Facebook for $19 billion.

And many of the highest-valued companies in the world are, no surprise, centered around apps — all of which need to figure out how to improve and keep track of the competition. It sounds like App Annie might be on to something, and we’ll have plenty of questions for the pair in just a few weeks.

The show runs May 4-6 at the historic Manhattan Center. Tickets are still available.

Our sponsors help make Disrupt happen. If you are interested in learning more about sponsorship opportunities, please contact sponsors@beta.techcrunch.com.