Nitrous.IO, a U.S.-Singapore startup that wants to ease the difficulties of coding by putting the process in the cloud, is making a big push to lure enterprise customers after launching a ‘Pro’ version of its service.

The startup, which last year closed a $6.65 million round led by Bessemer Venture Partners and previously raised a $1 million seed round, told TechCrunch in an interview that it actually built the new service using Nitrous.IO. That’s a whole new level of dogfooding.

At its most basic level, Nitrous.IO is a cloud-based integrated development environment (IDE) — but its features go beyond just storing code. By keeping code and development in a single place, it makes processes like setting up an environment possible in 10 minutes — as opposed to hours or even a day — while it allows its “200,000 plus registered users” to collaboratively work and share code just as you’d do with writing inside a Google Doc.

With its Pro service, Nitrous.IO has extended its feature set further still to accommodate users in corporate companies and other organizations with specific requirements. To that end, Pro customers have root access, their IDEs can run on dedicated instances, there’s support for Docker (with customization options), and customers can use their own computing infrastructures.

Pricing is still to be finalized, but Nitrous.IO Pro will vary from $14.99 per month per seat to $64.99, with additional costs for further customization. 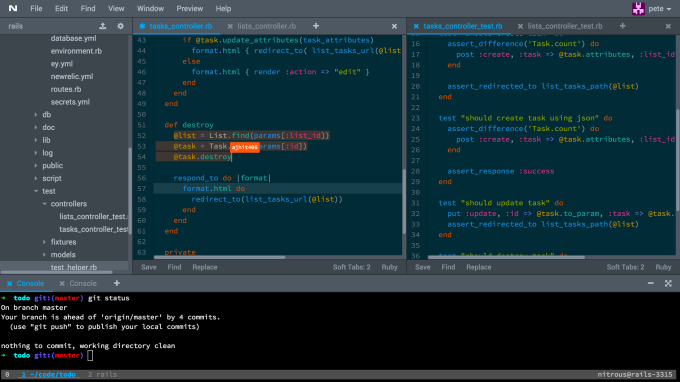 In addition, Nitrous.IO CEO and co-founder AJ Solimine said there are plans to support on-premise deployments over time. A limited beta rollout will start soon, he confirmed.

“We really truly believe the majority of web development will be in the cloud in the next five years,” Solimine said. “The [original] Nitrous.IO was a great first iteration, but we wanted to build something significantly better than your environment with Pro… taken it a step further, we want to eliminate the GitHub Readme.”

Nitrous.IO isn’t declaring all-out war on GitHub, though. Far from it. The startup sees itself as complementary to GitHub, and there are plans for tighter integration with the online code repository. The company has also hired a VP of sales, Justin Fry, who said one objective is to “connect the dots” in big companies, where Nitrous.IO is often used by different teams without knowledge of each other.

While it is targeting professionals with its new release, Nitrous.IO hasn’t abandoned more infrequent users, such as schools and casual developers. The basic service will remain free for up to two hours of usage per day, but the team is looking into other cost options, too.

“We will have an educational pricing tier,” Solimine explained. “We very much want to make this as affordable as possible for people learning, and we’re still experimenting with the most appropriate price for educational organizations.”

In the past, Nitrous.IO launched a packaged Chrome app, which turns even a $200 laptop into a coding machine. While the primary focus — and no doubt money — is in the professional community, ‘democratizing’ coding is still a key objective for Solimine and the startup’s 18-person team.

On the business side of things, the company isn’t thinking about an exit at this point — you could imagine the overlap with Github might make it an attractive target — nor are there plans to raise funds again soon.

“We have a lot of money left in the bank, and ideas we haven’t executed… there’s very significant runway,” Solimine said.

“We believe in the longer-term play,” he added. “Right now, maybe less than 10 percent of development is on remote environments, but we really believe this will be more than 50 percent by 2020.”