Tim Reyes Contributor
Tim Reyes is a freelance writer residing in Silicon Valley. With degrees in Physics, he has been an engineer for NASA supporting development of flight software of robotic spacecraft to the planet Mars.
More posts by this contributor

Editor’s Note: Tim Reyes is a freelance writer residing in Silicon Valley. With degrees in Physics, he has been an engineer for NASA supporting development of flight software of robotic spacecraft to the planet Mars.

Astrobotic Technology, a leading Google Lunar XPRIZE competitor, is setting up to become the first delivery service to the Moon.

With a low-cost launch, they now have a lander with the potential for precision landings driven by new system on a chip (SOC) technologies developed by Nvidia with help from General Electric.

Astrobotic knows that space and robotics are not that easy, but at a recent Nvidia-sponsored technology conference, the company’s engineers were presenting technologies that it argues could ease and accelerate the path to the Moon.

And the company is offering anyone — including their XPRIZE competitors — a ride to the Moon. Safely on the surface they propose a civilized Mad Max road race to the finish line – 500 meters away –  the winner taking  the $20 million grand prize.

To date, only the Japanese team HAKUTO has joined them.

To make their moon mission a reality, the company is blending an interesting mix of old and new into their lander design, the Griffin Lander.

The new includes the Nvidia Tegra K1 chip used initially in its Jetson dev kit. The old is none other than General Electric designing the custom boards based on Tegra K1 and low-cost computer boards they hope will be recognized as a better, cheaper, alternative to existing radiation-hardened electronics costing millions. The Nvidia dev kit costs little more than $300.

Tapping their own wiz-kids from Carnegie-Mellon, Astrobotics is using laser-guided imagery that was developed to compete for the DARPA Grand Challenge for autonomous vehicles. For Astrobotic, the convergence of all of this tech is designed to get them beyond just the Google Lunar XPRIZE but much more.

Make no mistake that NASA remains the enabler responsible for what is becoming the new space age for private enterprise. It starts with the inspiration, but over decades the agency has driven technology. Solid State electronics? Check. Material Science? Check. Autonomous Robotics? Check. Propulsion? Check. In real terms, Astrobotic chief executive John Thornton emphasized how valuable the NASA Lunar CATALYST program has been by lending NASA expertise and facilities in multiple fields across NASA Centers.

Behind it all is a chip from Nvidia that is effectively Neil and Buzz in a box – offering the capability of the first two astronauts to land on the Moon. Weighing under 4 kilograms (10 lbs), the company touts its avionics as capable of controlling the lander to a pinpoint lunar landing, with hazard avoidance down to 20 cm (8 inches) and touchdown accuracy to 3 meters.

However, the major stumbling block to the Moon has been economic, said Thornton. Thornton stated, “the biggest challenge is raising the money. The cost is quite a bit more than the prize. We’ve built a business model to send payloads to the Moon, a FedeX to the moon.”To Astrobotic, the XPRIZE is a secondary objective. The primary objective is to build a sustainable lunar delivery service and according to Thornton, they are making excellent progress, both tech-wise and with the plan.

Not just Astrobotic but every Lunar XPRIZE competitor failed to launch any attempt before the original 2012 XPRIZE deadline, then also once extended to 2013.  The deadline was pushed back again to December 31, 2015 but it became apparent that none of the teams would be ready. So Google revised XPRIZE to give milestone awards and set the date to the present December 31, 2016.

Thornton explained that Astrobotic will use a SpaceX Falcon 9 to lift up to 2500 kilograms to trans-lunar injection (TLI), which is the propulsive maneuver used to set a spacecraft on its trajectory for the moon.

Mission One for the XPRIZE will be to Lacus Mortis, at 45 north, 25 E longitude., landing within 100 meters of a lunar skylight – a pit – believed to be a collapse ceiling of an ancient lava tube. 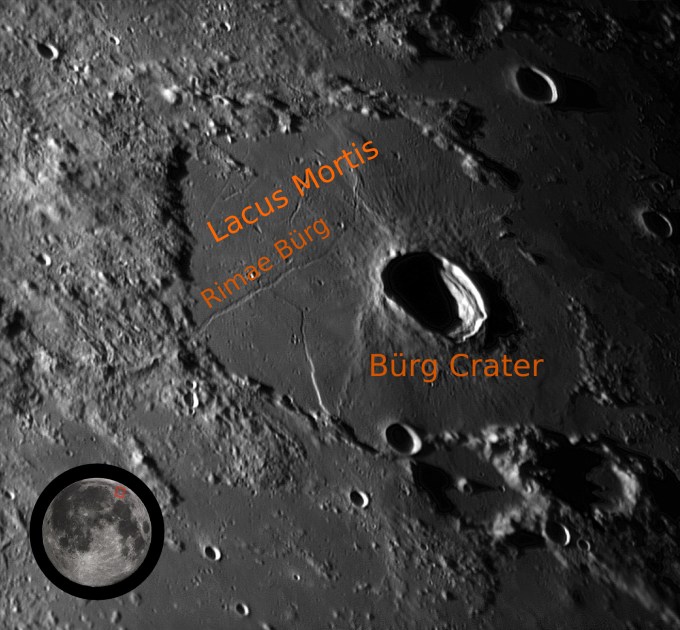 Two lunar skylights, what lunar scientists believe are the collapsed ceilings of ancient lava tubes, are known to exist in the Rimae Burg Rille structure in Lacus Mortis, Latin for “Lake of Death.” Astrobotic intends to make a precision landing at 100 meters offset from the edge of the skylight in the effort to win the XPRIZE.

If it can complete the Lunar XPRIZE, Astrobotic’s intentions are to send their vehicle and others down the navigable slope of the pit and explore the lunar underworld. The company wants to equip its lunar payload shipments with power and a lunar wireless internet with uplink and downlink to its global network on Earth.

On the Astrobotic website is a “Configure your own Mission” page that permits anyone to plan and head to the moon.

As with every one of the would-be winners of the Google Lunar XPRIZE, heading to the moon, as a transporter or its payload, costs money and that’s where both GE and Nvidia fit into the picture.

The Jetson Tegra K1 dev kit accelerated development and ed to custom boards by GE division Intelligent Platforms of North Carolina. At the tech conference, GE engineer Dustin Franklin emphasized that GE is in Pittsburgh alongside Astrobotic’s team. And the New York-based industrial conglomerate is not stopping at just a subsystem.

Franklin described the triple-redundant computer board that will be spaceflight tested to prove that it is a low-cost alternative. The system utilizes three of the COM Express Mini boards based on the Tegra K1.

Its not clear how far GE is going to go to re-enter aerospace. In some respects, they never left, despite selling off their Aerospace division in 1993. That year the company sent 37,000 employees to Martin Marietta a division that is a major player today in the exploration of the outer planets by Lockheed-Martin. 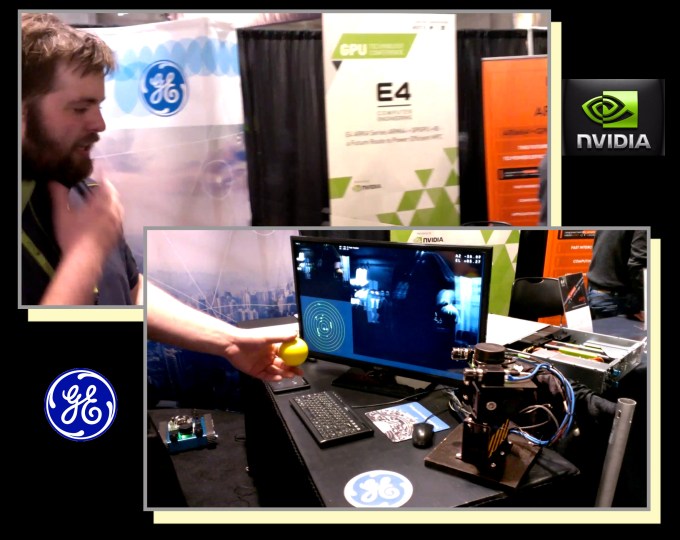 At Nvidia’s GPU Tech Conference, General Electric engineer Dustin Franklin demonstrates Nvidia Tegra K1-based technology driving a mounted stereoscopic camera tracking a yellow ball. The detector system is akin to the tech to be used by the Griffin lander. Franklin is one of several GE engineers working alongside Astrobotic’s.

Reality has set into the mindset of any remaining competitors because just 21 months remain to claim the XPRIZE. Also, the Google XPRIZE rules now stipulate that competitors must declare a registered and scheduled launch vehicle by December 31, 2015.

As Astrobotic’s Thornton emphasizes, attempting to win the XPRIZE is not the end-all, but just  the beginning, a stepping stone.

The surface area of the Moon stands between that of Africa and Asia. With continued advances in technology across many disciplines and given perseverance, Astrobotic could become the first lunar FedEx or UPS – a trans-continental transport system to our World’s future eighth Continent, the Moon.