If you spend entirely too much time creating, searching for and sharing the best GIFs and Vines with your friends, then you might get a kick out of a new mobile application called Trio. The app allows you to mash up media in order to create unique “remixes” that combine photos, videos, GIFs and music pulled from a variety of public sources, as well as from your own Camera Roll.

Today, there are a number of apps, like Flipagram or Sharealike, that let you combine photos and videos and set them to music in order to create customized stories to share with friends. But these apps are largely focused on pulling in content from your own device and media libraries. What makes Trio different is that it lets you combine content from other third parties along with content that’s private to you in order to build your stories.

In addition to your own photos and videos, Trio can access media from sites like Instagram, Vine, Giphy, iTunes and more, and it can pull in clips from movies and images from web searches as well. And this list of resources, the company says, will continue to expand in the future. 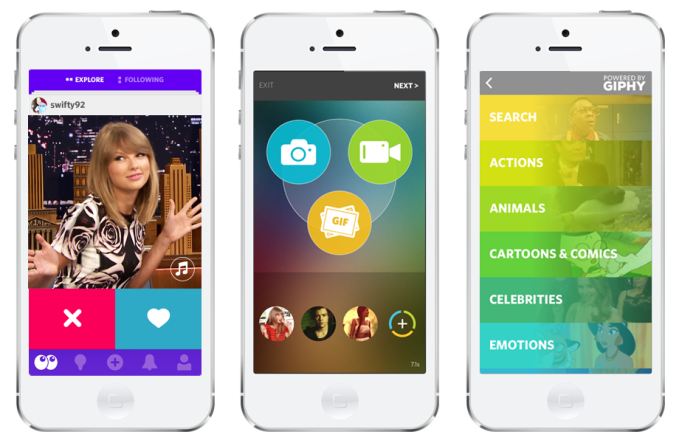 The app is easy to use, too. After getting it installed and completing a quick walkthrough, you tap the “+” plus button at the bottom to build your first Trio.

From the creation screen, you tap on an icon to select what content you want to start with — photos, videos or GIFs. Then, on the following screen, you can choose where that content will come from — your local device or a popular network. The GIFs section, which is powered by Giphy, also lets you narrow down GIFs by category. To add more content, you keep hitting the big plus button that now appears at the bottom of the screen and repeat the process.

Even if you’re not the creative type yourself, Trio is a social network that allows you to explore popular Trios, find and follow other users, and favorite or pass on Trios with Tinder-like left and right swipes. (This feature needs a little work, however, as it wasn’t easy to find your favorites again; they seemed to pop up under the “following” section in the app, instead of in, say, a list of favorited items under your user profile.)

Trio is the latest product from a company called Meograph, founded by Misha Leybovich (CEO) — previously an MIT rocket scientist, Berkeley student body president and McKinsey consultant — and designer and developer Clay Garrett (CTO). The company’s first product was a more complicated digital story editor available on the web, which was followed by an embeddable web widget in 2013. Meograph has changed quite a bit since then, including the addition of its new co-founder Garrett.

The Trio app, which soft-launched last month, is the result of everything the team has learned over the past three years, explains Leybovich.

“We gradually evolved into the notion of third-party assets into video…Right now virtually all mobile video is about the user’s own assets,” he says. “Those could be either slideshows of their own photos or capturing original video. The former is hard because most people aren’t going on amazing adventures all the time. The latter is hard because to capture video requires good lighting, good sound, good ideas and a lot of takes. It’s a whole production.”

With Trio, the idea is to put the world of popular media at people’s fingertips so they can be funny, creative or clever at any time, Leybovich adds.

The startup, a team of five, is currently based in both San Francisco and Atlanta and is closing a seed round which includes investment from Streamlined Ventures, Allegro Venture Partners, Western Technology Investment, Plug and Play Ventures, Media Camp as well as angel investors David Anderman (former GC and COO of LucasFilms), Larry Braitman (co-founder of Flycast and Adify) and Semyon Dukach (current MD of Techstars Boston).

Trio isn’t currently focused on generating revenue. But assuming the app can achieve critical mass, the team believes it has opportunities to work with brands on native ads, and it can collect additional affiliate revenue such as it does today with music and movie referrals.