From murder and terrorism to patent conflicts and sexual discrimination lawsuits, courtrooms are home to some of the most important dramas in our society. While our top retailers can identify people who are pregnant weeks before even the consumer has realized it themselves, lawyers continue to argue cases before judges with data based on a handful of anecdotes from other attorneys.

Ravel Law hopes to bring some big data magic to the courtroom, and perhaps improve our justice system along the way.

The startup launched their Judge Analytics platform today. The idea is to provide comprehensive insights on every judge in the country, allowing lawyers to research the best strategies for their client before they file a lawsuit or argue a motion before a judge. Armed with better insights, lawyers can then provide their clients with better services, and at a cheaper cost too.

While judges are often popularly conceived as objective arbiters of the truth, the reality is that every judge is a human being, a product of their own experiences and biases. “No two judges are exactly alike,” Nicholas Reed, a co-founder and CEE (Chief of Everything Else) of Ravel Law, says. The specific judge and even the specific timing of a trial can have a disproportionate effect on the outcome of a trial.

Some general insights are already well-known in the industry. For instance, patent trolls often file their lawsuits in East Texas, since those courts have proven to be quite amenable to those sorts of cases. As another example, a study of Israeli parole hearings found that cases held earlier in the day had a massive advantage of receiving a favorable ruling compared to cases held right before lunch.

But these sorts of insights are often too general purpose, and don’t provide the kind of granular insights that can really aid in a case. Daniel Lewis, the other co-founder and CEO of Ravel Law, explains that the day-to-day job of a lawyer is often much more focused. “Should we bother to apply to a judge for a particular motion? When would a judge make a favorable decision for people in our shoes?” 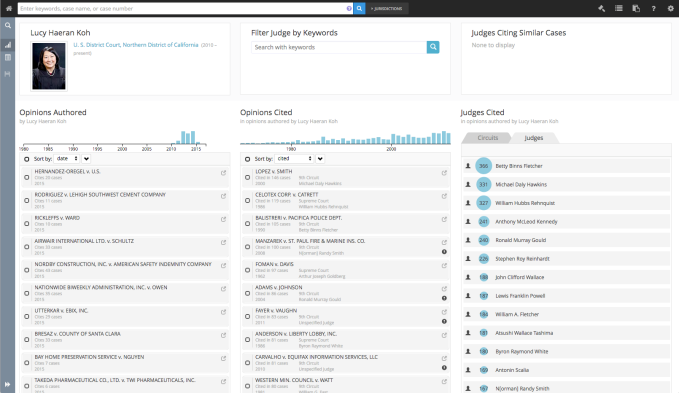 Through its Judge Analytics dashboard, Ravel Law highlights the top cases and federal circuit courts that a judge has cited in the past, cases that might be more familiar to a judge and therefore more likely to receive a favorable ruling. For instance, in a patent lawsuit, a lawyer might find that the judge assigned to their case is more likely to cite cases from the 3rd Circuit rather than the 9th Circuit where he is based, since he went to law school and clerked in Pennsylvania and remembers the 3rd Circuit’s legal precedents better. The company will host a webinar demonstrating the new platform today at 11am Pacific.

That kind of in-depth legal research is possible today, but requires an army of lawyers that is only affordable by the highest-paying clients. This is a systematic bias in the courts, since the kind of data insights that can help a lawyer improve a motion or appeal needs hundreds of thousands if not millions of dollars to accomplish. With Ravel Law, those insights will hopefully become much cheaper and more widely accessible.

The team partly conceived of the idea for Judge Analytics when they were doing natural language processing on court rulings. Lewis said that as the team was analyzing opinions, sentences from individual judges kept coming up again and again. We thought “there may be a bug in the system,” he said, but the team discovered that judges were “just copying the sentences when they wrote their opinions.” Armed with that information, an attorney arguing before that judge could be sure to mention such a case.

While those insights might sound obvious, the legal profession has remained mostly immune from the big data changes that have transformed other professions. Marketers know their potential customers better than ever, and yet, the people who represent us in court may have limited specific knowledge of a judge and his or her thinking.

Such insights are not just valuable to practicing attorneys, but also to law students. Just take a recent article the startup published on the top “rising star” judges that have recently been appointed to their positions. Using its citation data, the company investigated which judges are already having a disproportionate affect on the decisions of other judges. For students trying to find potential clerk roles, that information could transform a career.

The idea of Ravel Law is to use a combination of data visualization, natural language processing, and machine learning to make the law significantly easier to understand for lawyers, improving the quality of legal research while also making it more efficient. The team came out of Stanford’s CodeX program, which is an interdisciplinary center of computer science, law, and design.

Lewis argues that now is the time to improve the legal profession. “As law students, the research you have to do takes one third of your time in practice, and is extremely stressful since there is so much information and the tools are so antiquated,” he said. Those tools “are the same as what I saw in my father’s firm years ago.”

As civil rights and justice issues increasingly come to the attention of Americans, a harsh lens is being placed on the justice system. With better data, everyone in the system may have a better chance not just to have their case heard, but their best case heard by the best person.