It’s been said the death of email newsletters has been greatly exaggerated. Case in point, perhaps: a new startup called RefreshBox, which lets anyone easily curate their own weekly newsletter. The service has seen 62 percent week-over-week growth in the now 15 weeks it’s been live, and today serves 3,700 subscriptions to some 1,200 email recipients from 207 different curators.

Currently, the service’s early adopters are largely tech-focused, given the co-founders’ own background in the industry – they met while building their own separate startups at DreamIt’s accelerator in New York. Plus, the service also recently benefitted from trending on Product Hunt.

Among the group of email newsletter creators are some notable names, including Google developer advocate Paul Kinlan; angel investor Guy Gamzu who sends out newsletters about startups; TechStars London’s Jon Bradford who emails about accelerators; Gili Golander who emails about growth hacking (the most popular newsletter so far); and David Greenwood, who emails about digital health. There are also “mystery curators,” like this unnamed VC. 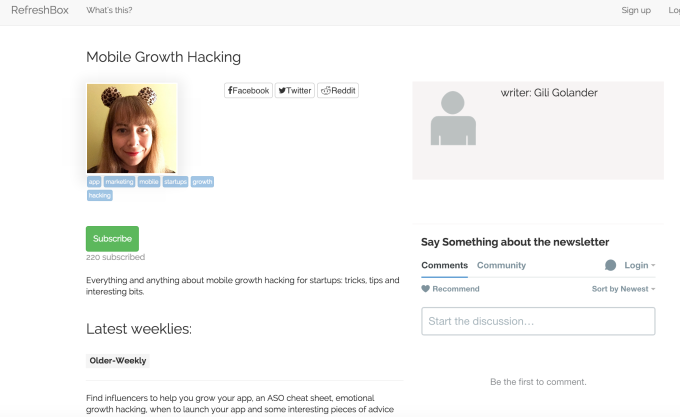 What’s interesting about RefreshBox is that none of its creators are actually writing their own content, but instead are putting together their own, personal “must reads” of the week. That is, it’s a tool that lets them share the five most important links to articles they think are worth a look.

As one of RefreshBox’s co-founders noted, it’s sort of like an “8tracks for email newsletters,” referencing the startup that lets users build their own streaming music playlists.

RefreshBox, he notes, is a way to peer over the shoulder of some of the industry’s giants, and see what they’re reading. This co-founder, who has previously founded a couple of startups in the past, is still working his day job and didn’t want to have his name appear in TechCrunch just yet. But the team also includes developers Roy Amir (previously CTO of Trippinin.com), Zeev Jelinek (CTO of instru-magic.com) and community manager Tali Arkushin.

For newsletter curators, the idea with RefreshBox is that it lets them build up a community around their expertise without requiring they spend a lot of time being active on social media or writing their own blog posts. Instead, they can point to quality content they think is worth the read, while using a Chrome browser extension to make their selections as they come across them. As for recipients, they get the benefit of a time-saving “professional best read” hitting their inbox every week.

A tag list and search box on the RefreshBox website lets you quickly find relevant newsletters, and the startup has so far found that its readers are subscribing to three newsletters, on average. The service is seeing a 38 percent click rate, and of its nearly 4,000 subscriptions to date, there have been only 32 “unsubscribe” actions so far.

Despite RefreshBox’s quick growth, the startup is still sort of in “pet project” status – the founders are working their jobs, having built the service in seven months of nights and weekends. But that may soon change – the team is looking to raise an angel round so they can focus on their efforts with RefreshBox full-time.

The service will remain free to use, the startup tells us, but they may choose to eventually monetize their subscriptions by way of sponsored links included alongside the five recommended reads. This revenue would be shared with the curator, though specifics are still yet to be determined.