Apple’s new set of ‘diversity’ emoji attracted a lot of attention when it was released in all of its glorious shades last week. But what comes next? What is beyond the emoji?

The tiny animations (🙋) have become popular for personalizing text messages, WhatsApps, status updates, tweets, etc. — but one company believes that people should have the tools to be even more expressive at the tip of their fingers and thumbs.

Imoji, the app that launched last year to let you make stickers out of anything (within reason), is hoping to make its repository of customized emojis (which I will henceforth call stickers) the industry standard. The startup just announced an SDK that grants third parties access to its library of over 3 million stickers (yes, 3 million) without cost.

Imoji’s first partner will be Fleksy, the popular keyboard app for Android and iOS. You can already send stickers — those you create and those that exist in the app already — to iMessage, Facebook Messenger, Instagram, Twitter, etc., via the Imoji apps; but integrating Fleksy puts them directly onto a keyboard… for better and for worse 😉

Imoji said it is in discussions with a handful of other, undisclosed partners. It hopes that these deals, which are not financial, will go towards making its catalog of 100 percent user-created stickers as ubiquitous as emoji.

Imoji takes a very different approach to the so-called sticker pioneers in Asia. While messaging apps Line and Kakao Talk charge users to download premium sticker packs, and offer free content sponsored by brands for cheapskates, Imoji’s collection is entirely user-generated and available totally free of charge. (Line, to be fair, does offer a selfie-sticker app — the Japanese company has never said how many selfie stickers have been created, though we suspect its number is far fewer than 3 million.) 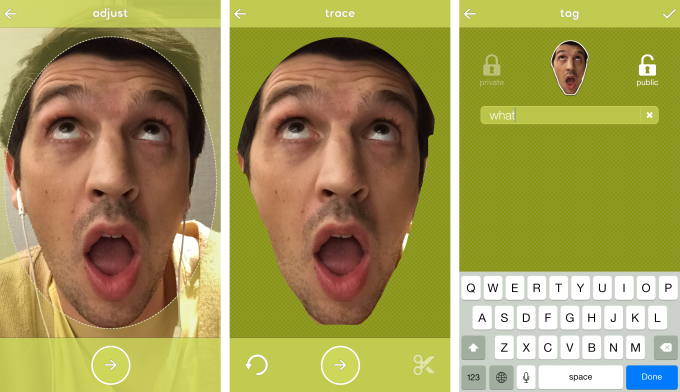 The mandatory collage of me looking silly

If Imoji stickers are free to create and use, then how will the company make money?

Imoji, which has raised $2 million from investors to date, is not currently focused on monetization. In the future, it could offer services to connect brands with its users — although not through a branded sticker approach.

Stein explained that, since Imoji users make very specific enquiries when searching, there could be opportunities to surface brands against specific search terms. He added also that a possibility to monetize exists around location. For example, if users are creating custom emoji at a sports event, there’s a chance to connect a brand in a meaningful way, he said.

“Search is our biggest metric… [and it could present] an opportunity to work with really amazing brands, and figure out effective, non-obtrusive ways to serve content,” fellow Imoji co-founder Tom Smith added. 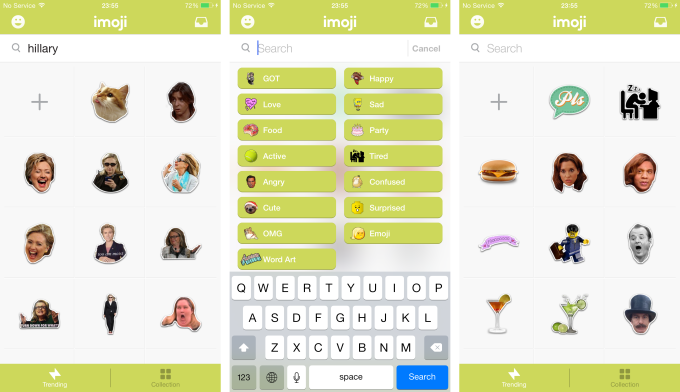 At this point, Imoji is focused on growing the reach of its sticker catalog, which explains the SDK. Stein and Smith believe that “the evolution of stickers will go to user-generated content, just like the way YouTube disrupted TV.”

“We believe a toolkit approach rather than a menu is the most powerful thing you can offer,” Stein explained.

The company got a boost last month when it was named among the initial partners for Facebook’s Messenger Platform. Stein and Smith revealed that more than 70,000 stickers were created during the first five days following the launch of Messenger versions of its apps. 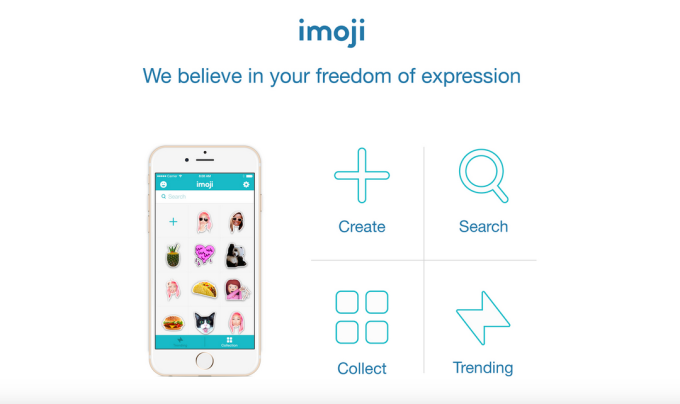 Stickers first took off in Asia, where they gained attention as a means to express emotion, not to mention avoid tapping out messages on a phone — typing non-Romanic languages is a lot tougher than English. It’s interesting that they appear to have a different usage in the West, where they are less cartoonish and expressive, and often memes, selfies or comical images.

If my general observation is right, then a gigantic repository like Imoji’s could have value in the U.S. for offering something different/beyond regular emoji. I do think user-generated stickers are a little too shallow for most users in Asia, though, because there’s no much meaning when I send my face to a friend.

That said, Imoji’s big bet isn’t Asia — it’s that it can be the primary platform powering stickers in the U.S. and other Western markets. Gaining traction and engagement are key to turning its free service into a monetizable business, and it will be interesting to see which companies tap into the SDK and bring its collection outside of its app and (potentially) to a larger audience.

The startup isn’t alone in chasing this opportunity, however. Rival Bitstrips launched its custom emoji app and raised $8 million back in October. There is a key difference between the two: Bitstrips ‘cartoonizes’ images, while Imoji is free-form — though you can edit the borders around your creations before you immortalize them inside the Imoji app.

App developers and content companies can get more information about the Imoji SDK, and apply to be a partner, at the company’s website 👉here👈.