Truly the bounty of technology’s cup overfloweth. Cannabis smokers of the world wishing they could share their buzz with others can do so via an anonymous geolocation app called Who Is Happy, on iOS and Android.

Colloquially dubbing itself a ‘Foursquare for Stoners’, the just-got-high checkin app is the work of Paulo Costa — an epilepsy sufferer who is hoping the resulting publicity helps to decriminalize cannabis in his native Brazil, given its medical potential as a treatment for reducing seizures.

Who Is Happy was launched in Brazil in January, where it pushed into the top 30 most downloaded apps. This week it’s opened for downloads in the U.S., and Costa is currently in Silicon Valley taking meetings to try to drum up investor interest, before heading to Denver for more meetings (and, well, the Cannabis Cup). He’s bootstrapped development up to this point.

As we noted last December, VCs are sparking up more weed-tech investments. In the 12 months up to that point, CrunchBase recorded 29 venture investments in cannabis startups for a total of nearly $90 million in capital committed. As pot gets decriminalized the entrepreneurs are primed to move in and make a (legal) killing.

The Who Is Happy app lets users tap a button to tag their buzz on a map — suitably hazily, with checkins indicated on the map by a puff of green smoke with a radius of 1km for four hours after the checkin button is pushed, making it tricky to pinpoint the exact location and moment a spliff/blunt/joint/doobie/Camberwell Carrot/pétard was sparked. Individual users are never tagged.

As well as checking out where fellow smokers have been getting high, users can see a global leaderboard of happiness by country, and collect their own stats to quantify their spliff smoking.

The app is free to download but Costa sees future business potential by building it out into a global social network for cannabis smokers — monetizing via ads. “We are working in some new features to provide to users useful geolocated information about dispensaries and doctors, whom will be able to advertise on our platform,” he tells TechCrunch.

Presumably on-demand snack delivery startups might also locate synergies with such a happy and hungry community. 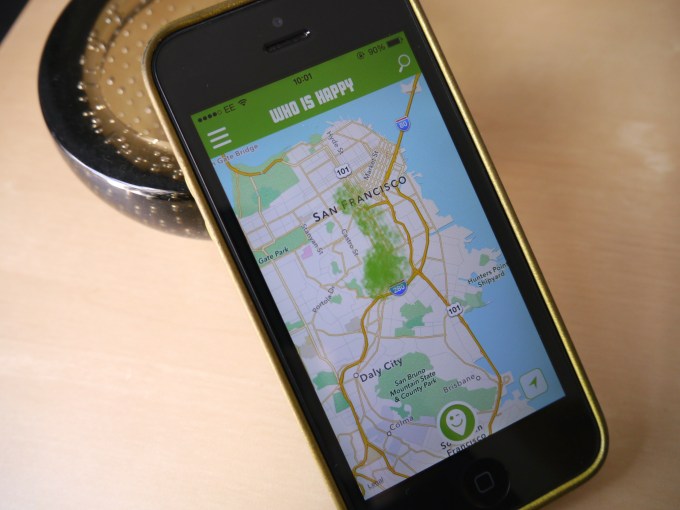