Popcorn Time, the service sometimes referred to as the “Netflix for pirates” because of the way it makes it easy to stream pirated content to your PC or mobile device, is now getting a lot easier for iOS owners to use. According to new reports, the service is being made available by way of an iOS application that no longer requires users to jailbreak their iPhone or iPad in order to install it.

For those unfamiliar with Popcorn Time, the software sprang up as an easy way to stream pirated movies. It’s not technically illegal because the app streams content found elsewhere on the web – content it doesn’t produce or host itself. But the software does make it dead simple to access that content, which today includes the best, high-quality movie and TV show torrents from a number of sites.

It definitely operates in a gray area of the law, however. And it’s unethical, you could argue – you’ll have to figure out where you stand on such a thing before you choose to download it and use it, of course.

The service’s popularity and its ease of use has already been cited as a potential competitor for legitimate streaming services, like Netflix. In fact, Netflix even referenced the app earlier this year in a letter to shareholders which discussed the threat of piracy. Essentially, Netflix’s CEO Reed Hastings was making the case that it was piracy and not legal entities like Hulu or HBO that were the biggest competitors to Netflix’s business.

The original Popcorn Time service closed down in 2014, but since then a number of anonymous entities have resurrected the project, including, for example, one that introduced their own VPN option. And last fall, Popcorn Time got its own iOS app by way of a forked build of the service. Unfortunately for those interested in trying out the service on their iPad or iPhone, the app required you to first jailbreak your device. That may now change given the report from Torrent Freak’s blog which explains how the developers figured out a way to get Popcorn Time on iOS devices without the need for a jailbreak. For obvious reasons, it’s not as simple as being able to download the app from the iTunes App Store, given its questionable legality.

But the process is still relatively straightforward. The team created a custom installer which works with a Windows or Mac desktop PC. You’ll have to connect your iOS device to your computer via a USB cable, then follow a few simple instructions to transfer the app to your device. 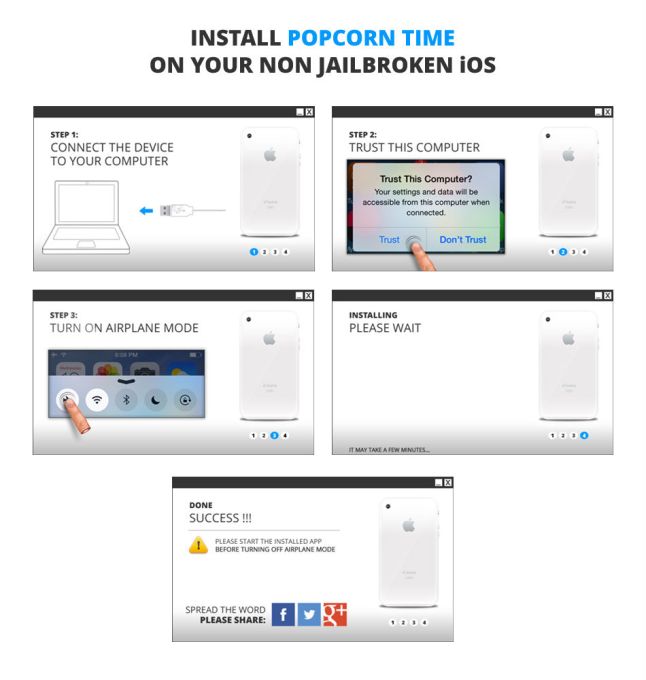 The app will support watching movies and TV shows on your phone or tablet, and it will allow for playback on Chromecast and Apple TV, like the Popcorn Time desktop app does. The installer is posted to a dedicated page, but is currently only available for those with Windows PCs. (Mac support is said to arrive later this month.)

Also be aware that the app is still listed as being in “beta,” so it’s likely to have a few bugs. However, Torrent Freak says they were able to test an earlier build and found it “works as advertised.”

Proceed, of course, at your own risk.

Popcorn Time, the service sometimes referred to as the “Netflix for pirates” because of the way it makes it easy to stream pirated content to your PC or mobile device, is now getting a ...