Showbie, an Edmonton, Canada-based startup, wants to make it easier for teachers to share assignments with students and for those students to turn in their homework online (or through the company’s iOS app).

The company recently released version 2.0 of its service and today disclosed that it has now raised a total of $2.3 million in seed funding. Investors include Point Nine Capital, which led this round, as well as Kymbask Investments, Yaletown Venture Partners and Imagine K12, the edtech accelerator program Showbie launched out of. 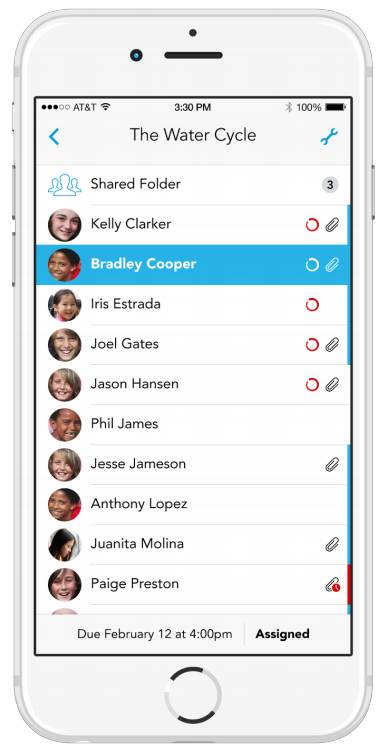 The idea here is to provide a full workflow solution for students and teachers that makes the homework assignment process almost completely paperless. Teachers can write their assignments in the application and students can work on them online or on paper. Once they are done, they can submit the assignment directly — or if they worked on paper, they can snap a picture of their homework and send it through the company’s app. Teachers can then annotate the photos or PDF files directly in the company’s app.

The basic philosophy behind the app is that Showbie wants to make it easy for teachers and students to communicate without burdening them with unnecessary features.

As Showbie founder and CEO Colin Bramm told me, the team worked closely with teachers to build this service.

“The most common problem they’ve told us is that they spend countless hours marking and grading students’ work,” he said. “We decided we had a unique opportunity to build an app that could save teachers a significant amount of time, and increase their ability to provide rich, quick, feedback to their students. To do this, we had to focus on building something that was very simple to use and function as a replacement to common paper-like assignments but also scale to classrooms that are using more multimedia apps and video.”

The service is available in 10 languages, including Spanish, French, Chinese, Japanese and Dutch, and Showbie says its service is now in use at 17,000 institutions and more than 1.2 million students and teachers now use the service.

The company tells me that it is adding about 900 schools and 140,000 students per month, so it’s getting some nice traction. This is surely due somewhat to Showbie adopting a freemium model that allows teachers to start with its free edition before the company will try to sell a Pro version to the school. In the long run, Showbie plans to build and sell subscriptions for additional apps and products to schools and teachers.

The company plans to add a couple of new features to the service before the beginning of the new school year. These include a markbook so teachers can record their grades and improved annotation features, including voice notes.