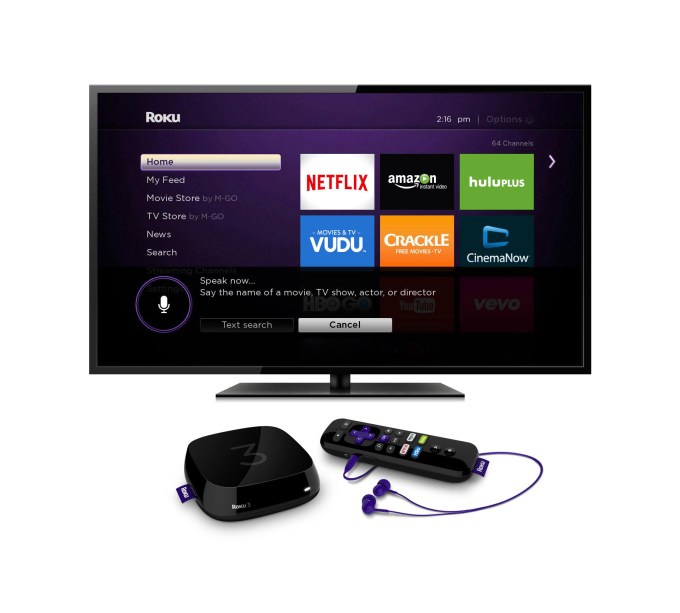 The Roku 2 and Roku 3 streaming boxes are getting refreshed today, with new hardware providing faster movement through the interface as you jump around between channels and apps.

There’s also a new input method for those who buy the highest-tier Roku 3: the remote now includes a microphone for voice searches, which is now the default option that pops up when you press the search button.

In a quick demo I saw last week, the voice search function was fast for recently-released movies and hit shows like “Breaking Bad,” though it had difficulty when searching for channels with unique names like “TechCrunch” (the trick was to just say “crunch”). It’s an extra button press to get to the traditional keyboard for those who prefer the old method.

While the new search option is reserved for the $99 Roku 3, the Roku 2 (as well as current-gen boxes and TVs running Roku software) will also get the big new discovery feature: the Roku Feed. When you search for a movie on your Roku, you’ll have the option to follow it and receive updates when it shows up in new channels or when prices drop. Instead of popping up notifications for those updates, Roku decided to make the feed something you check when you don’t have something in mind to watch already.

For now it’s focused on films that are still in theaters — the idea being that while theater release dates are broadly advertised, it’s often a surprise when a movie makes the transition from the box office to Netflix or Amazon Prime because of the confusing state of release windows.

The upgraded Roku 2 will cost $69 but won’t include a microphone in the remote or a headphone jack for watching TV without disturbing the roommate or significant other.

Roku says I’m getting a unit to review at some point early this week, so be sure to check back for our video hands-on with the new set-top boxes as well as the new Roku app, which includes voice search right from your phone.