A startup called Kifi is rolling out a new tool that allows you to automatically save all the links you tweet in order to create a personalized search engine that includes those links as well as others it recommends based on what you’ve already shared. Called “Kifi for Twitter,” the company describes the new feature as something of a deep search engine for Twitter because it’s not only indexing the tweet itself, but also the actual content contained in those links you’ve shared, allowing you to more easily retrieve this information in the future.

Explains Mark Yoshitake, VP of Product at Kifi, “one of the huge problems that we’ve found is that people have a hard time recalling the wealth of information they’ve found and shared on social networks.”

As you probably know, if you’re not regularly engaged on social media and keeping an eye on your many streams, then information often just gets missed. That can leave people feeling stuck in between two extremes – either you stop paying attention to social media entirely and begin to feel like you’re missing out, or you stay tuned in but then have to deal with the pressures of information overload.

In fact, social media’s unfortunate tendency to be biased towards the “recency” of content is what Kifi’s aiming to attack with its product. Kifi for Twitter runs in the background, requiring little effort on your part, but can then pull back the right information when you need it.

However, Kifi is not some glorified, automated alternative to bookmarking links using your web browser. Instead, the idea is to analyze the content found within those links in order to make recommendations of related items you may be interested in. This part is a lot like how YouTube makes suggestions of related videos to watch, for example.

In addition, Kifi also tracks people who collect similar things, so it can analyze and filter that content, as well, in order to improve its recommendations. 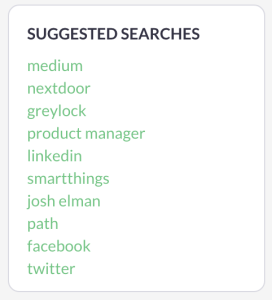 “It’s essentially an interest graph plus a people graph and a topic graph all integrated together,” says Yoshitake, referring to the ways it puts all its collected data together. The startup is also filing patents on its engine (dubbed “Cortex”) and its associated algorithm called “HelpRank” (because it’s about how helpful you can be to another person in Kifi’s network.)

To retrieve the content Kifi collects, the company creates a word cloud of suggested searches you can access directly. For instance, here’s Greylock’s Josh Elman’s library of Twitter shares. And here’s one based on TechCrunch tweets.

In addition, Kifi also offers a Chrome browser extension, which will return any link you’ve tweeted before along with other personalized recommendations. When you do a search on Google.com, for instance, Kifi’s extension will inject these links at the top of your search results (see below).

You can also search across Kifi and Google via the company’s mobile apps for iOS and Android.

The Chrome extension has been available for around a year and a half now, as Kifi had earlier been developing its “social network for knowledge” which allows users to save links from around the web to various collections, sort of like a Pinterest for articles. Kifi would then index and analyze all the words on each link so it could be retrieved in future searches. 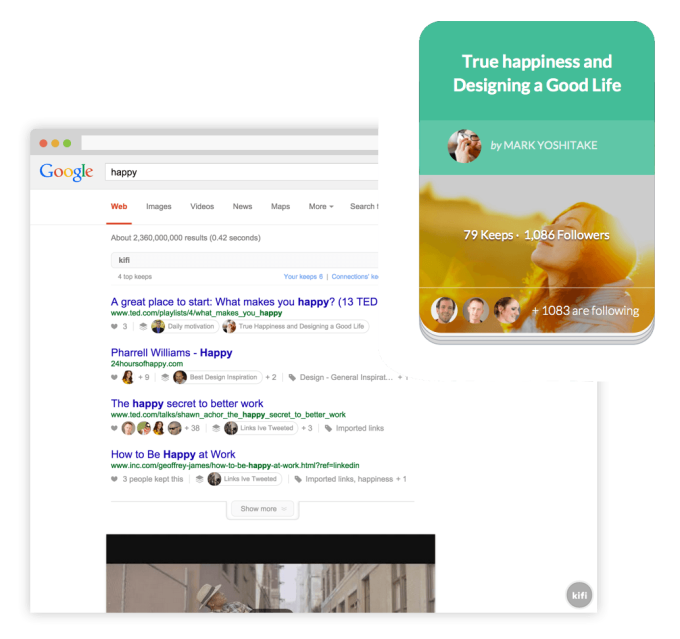 To date, Kifi has grown to over 60,000 users, but its recommendation engine and full integration with social networks is only a couple of months old.

Meanwhile, the deep search functionality for Twitter has only been live for a few days now, but it’s already gaining a couple of thousand users per day, the company claims. (The feature currently has a waitlist, but TechCrunch readers can gain early access by signing up via this link.)

Kifi’s team includes CEO Dan Blumenfeld, previously the CMO at Check (acquired by Intuit); Eishay Smith, formerly the Director of Engineering at Wealthfront, also previously of IBM, Netflix and LinkedIn; Jared Jacobs, an ex-Googler who co-led Gmail’s frontend team; Mark Yoshitake, the co-founder of Google Cultural Institute who also launched Google Book Search and is the ex-head of Platforms at YouTube; as well as a number of other data science and machine learning Ph.D’s and other ex-Googlers. 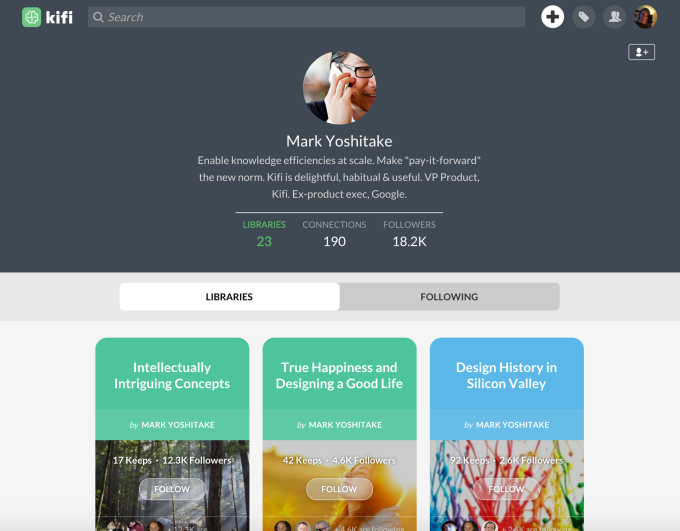 Kifi’s technology, while robust, is something that may be hard to scale to a mainstream audience, given that many people aren’t active Twitter users, nor have a burning desire to catalog their many shared links. Instead, Kifi seems to make sense more for Twitter power users – people like those in the media or researchers, for example.

In fact, it would almost be preferable to see Kifi baked into Twitter itself, improving Twitter’s own search functionality by giving it a way to better retrieve the links users tweet by better understanding the content they contain.