The latest development comes from SmartNews, a popular app founded in Japan that competes against the likes of Flipboard and Nuzzel in the news recommendation and aggregation space. The startup behind it has raised $10 million to expand its presence in the U.S — specifically to staff up its San Francisco office. It’s on the hunt especially for machine learning and data science specialists to continue honing its recommendation algorithms, co-founder Kaisei Hamamoto tells me.

SmartNews, which now has 10 million downloads and 1 million monthly active users in the U.S., says that the $10 million in funding was made on a pre-money valuation of $320 million. As a point of comparison, Flipboard was last valued at $800 million back in was December 2013, when it last disclosed fundraising (Flipboard has raised just over $160 million to date). SmartNews itself confirmed a $100 million valuation in October last year, meaning that it has tripled in the last six months.

SmartNews described this latest injection as a bridge round to me, made ahead of its Series C. Comes from previous investors, led by games company GREE, with participation also from Globis Capital Partners, Atomico, Mixi and Social Venture Partners. Hamamoto and his co-founder Ken Suzuki are currently in the U.S. raising a larger Series C round, as well as signing the final details for a new office space. To date, SmartNews has now raised $50 million.

SmartNews’ move into the U.S. and the new funding come on the back of a strong year for the startup. In addition to its 1 million MAUs in the U.S. since launching a U.S. edition in October 2014, it has around 4 million MAUs in Japan, where it launched first.

That popularity is also being played out in the app stores, where over the last several months SmartNews has managed to remain consistently in the top 10 in Apple’s App Store and Google Play, according to App Annie figures. In doing so, it has more often than not outranked more higher-profile rivals like Flipboard.

Machine learning but not for news junkies

The company’s co-founders believe that part of the reason for SmartNews’ growth is because of how the app has been built. Many aggregation service will claim to have intelligent algorithms directing what articles get recommended to users; SmartNews claims its are better.

The machine learning-based recommendations focus not only on what you click on to read, but where you pause when you are browsing in the app, and what people read and pause near when they like the same things you do, comparing all of this against a massive trove of articles, to deliver to users a clean interface of things they may want to read. (Hence, the “smart” of SmartNews.)

The algorithms, they claim, which can be fine tuned based on location and other parameters, are also why the company is able to grow quickly into so many markets — it’s now present in over 150 — without staffing up significantly or raising enormous amounts of cash, music to investors’ ears, too, it seems.

“The news is international, but not all news apps truly are,” Niklas Zennstrom said in a statement. “SmartNews machine learning is the key to breaking through to general consumers, even the emerging/developing world on mobile: SmartNews algorithms pick what’s trending and culturally relevant in different countries and regions. This is the breakthrough needed to scale news delivery to billions of mobile devices.”

What SmartNews doesn’t need to work is your social graph. In other words, no logins to Twitter and Facebook. This has a few advantages. One is just in terms of the kind of results you end up getting (avoiding the so-called “Filter Bubble” of too-narrow information).

This also means that not only is the app less dependent on third parties to propel its engine, but for those who are not happy about social networks collecting more data on them, it’s one less app to worry about. Interestingly, this fact also makes it attractive to another company, Google, which uses SmartNews to power news delivery in Google Now.

Hamamoto also contends that another reason why SmartNews is doing so well is that it tries to position itself as an app for the general public, not journalists, or tech buffs or news junkies — a target customer triumvirate that, some believe, has been a big failing of many of other news aggregation apps.

Hamamoto is all too aware of the pitfalls of building news apps for power users: his previous app, Crowsnest, aggregated news based on Twitter shares and RSS feeds and then delivered the results in a list. “It focused too much on personalisation and news junkies,” he says. “That was one reason why it failed. Based on that I built SmartNews. We try to keep our algorithms out of the way now.” 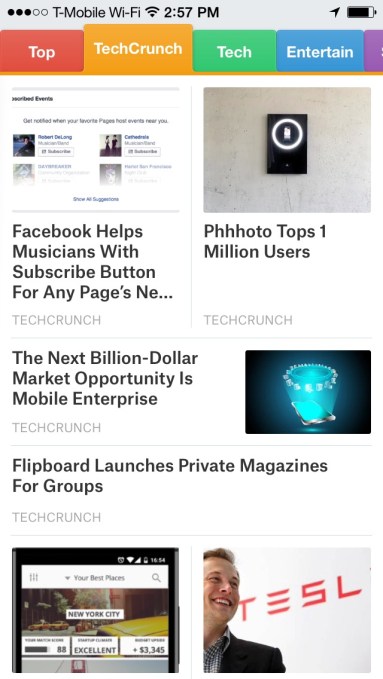 The other side of SmartNews’ business, working with publishers, has continued to develop at the same time. Globally, the company now works with over 150 publishers. Led by Rich Jaroslovsky, SmartNews’s VP of content and a former journalist himself, the company has signed on MSNBC, TIME, Buzzfeed, HuffingtonPost, VICE, Medium, Quartz, AOL, Upworthy, People, Vox, MTV News, The Verge, AP, Reuters, USA Today and Fox News.

Suzuki says that over 80 of the wider pool of publishers get at least 1 million pageviews — still an important metric for ad-based businesses — each per month via Smartnews. (Some get significantly more, some get much less.)

It’s on the publishing side that SmartNews will be focusing its monetizing efforts.

For now, SmartNews’ only revenue generation has been in the form of a small roll out of ads in its app in Japan. These run both near stories in SmartNews’ stream, as well as alongside stories when you click to read them. SmartNews’s take is to make ads relevant to the content (eg, food ads alongside food articles), and to only take a cut when the ads are in the stream (alongside articles, the publishers get all the proceeds).

The other area where the company will be turning on sales soon are in subscriptions and paywalls.

“A lot of publishers are interested in subscriptions, and they have been having a hard time developing something themselves,” Hamamoto says. “We are very open to launching something like this.” He says it’s likely to be based around the idea of a monthly rate, which would let users pay for specific channels dedicated either to a subject, or to a specific publisher.

The ads are not likely to launch in the U.S. until there are more MAUs, while the subscriptions will probably be turned on later this year, Suzuki says. “It’s a big part of the reason why we are moving so fast.”