Editor’s note: Suranga Chandratillake is a general partner at pan-European, early-stage venture capital firm Balderton Capital. Ferenc Huszar heads up data science for Balderton, was previously a senior data scientist at PeerIndex and has a PhD in Machine Learning from the University of Cambridge.

While the high-level investment trend in innovative technology is similar between the U.S. and Europe, digging deeper exposes interesting differences. Europe seems to be punching above its weight in some predictable areas like banking and hospitality while being weaker in historically strong areas like fashion and insurance.

At a high level, the trend of early-stage technology deals over the past couple of years is pretty simple. We see continued, increasing investment across all stages into early-stage technology companies. As you’d expect, more is invested in the U.S., but the EU continues to hold pace, albeit at a lower level:

Digging deeper reveals that, as you’d expect, some kinds of early-stage tech companies are seeing more deals than others. Our second chart shows which early-stage tech verticals have the greatest investment velocity globally – that is, the rate at which investment (measured as number of deals) increased in the second half of 2014. We’ll measure in number of deals rather than dollars invested going forward in this post, as that allows us to include multiple stages without diluting smaller companies from mega rounds. 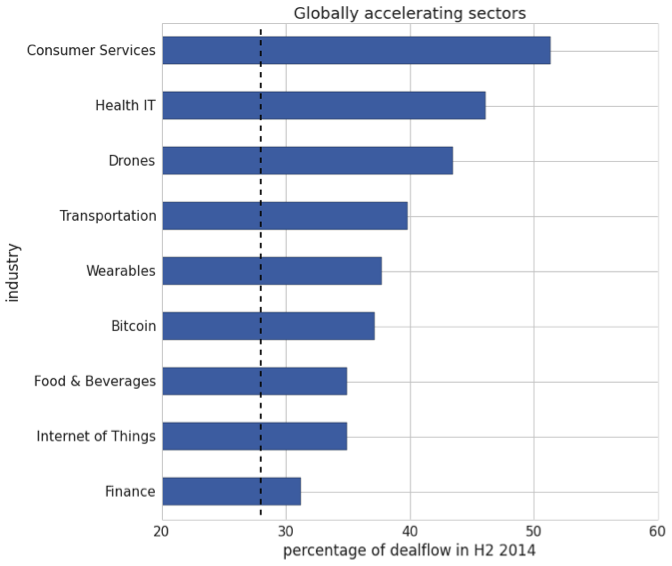 Our next chart lays out which verticals are seeing an unusually high level of deals in Europe. As you can see, areas like virtual reality and travel are seeing comparatively more deals in Europe than other sectors. Could these be Europe’s boom verticals? 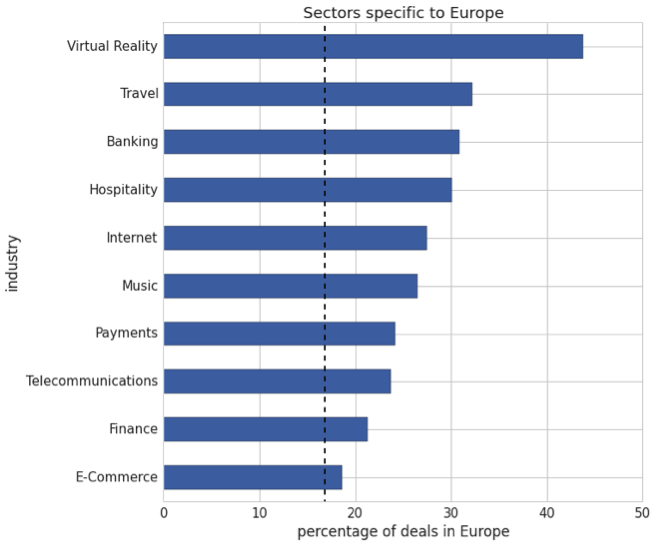 Our final chart uses a quadrant to compare, vertical by vertical, the volume of deals being done globally with the volume being done in Europe. In the very top right, you have the kinds of early-stage tech businesses that are hot globally and also seeing a high level of deals in Europe.

At the bottom right you have the kinds of early-stage tech businesses that are hot globally, but are seeing comparatively less deal activity in Europe, so these verticals might be where Europe is not doing as well in terms of producing attractive early-stage tech companies. 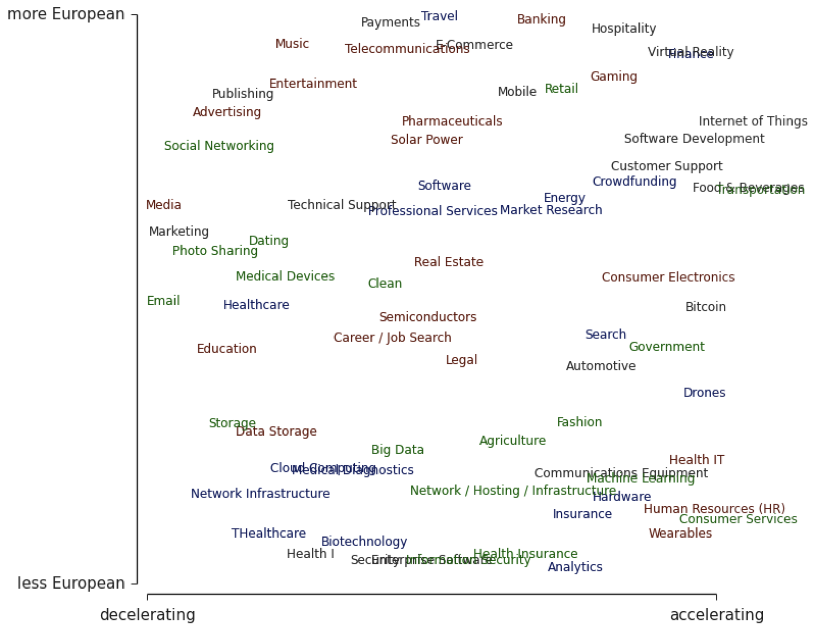 Much of what see in the top right seems to belong there. Banking, hospitality, retail, food and beverage are industries where Europe enjoys historical breadth and depth, and that are being disrupted in Europe by new tech companies, including Nutmeg, JustEat, The Hut or Pact. It makes sense that people who understand these markets are rewriting the rules in Europe, both as entrepreneurs and as investors.

Also in the top right is software development. This is, of course, strong in the U.S., but Europe has an impressive history in the open-source movement and churns out many software engineers and computer scientists. Europe’s commercial track record doesn’t match that of the U.S. in software development, though, so investing in Europe in this vertical could be a riskier move.

Crowdfunding is an interesting one; some European states have friendlier regulation on this than the U.S., which could mean advantages for European crowdfunding companies over their counterparts in the U.S.

Some of the verticals in the bottom right – where Europe seems to be missing out on global investment momentum – could be there for reasons that one can understand, but others are puzzling. Network/hosting/infrastructure are core Internet services, perhaps with larger communities of experts in the U.S. than in Europe.

However, insurance is an industry that has its historical roots in the U.K., and the country is still home to key markets and players in the sector. And given the prominence of Paris, Milan and London in the fashion business, should more European fashion startups be getting funded? In addition, given Europe’s nationwide health services, why isn’t it creating more health tech companies? This is where VCs can start digging for opportunities that have been overlooked.

Note: Data is from Mattermark; analysis by Balderton Capital.