It’s been a very suspenseful day for all of those involved in the Pao vs. KPCB trial (well, maybe not “Sleeping Guy”). We had a verdict, and then suddenly we didn’t, because a juror had changed his mind on the walk up from the jury room to room 608. When the final verdict did come in, again, many were stunned and many, especially those on the KPCB side, were relieved. It’s been a long, winding four weeks.

In an impromptu interview with the press hoards (video above), Sammut explained why the presiding judge, Harold E. Kahn, sent the jury back to re-deliberate at around 2:20 p.m. today, when he realized there was a count of 8-4 against in the courtroom and 9-3 against in the jury room for the fourth claim: “Were Pao’s conversations in December 2011 and/or her January 4th 2012 memo and/or her filing of this lawsuit a substantial motivating reason for Kleiner Perkins’ decision to terminate Pao’s employment in October 2012?”

Sammut explained that a juror had changed his mind on the way back up to the first verdict, and then changed his mind again in the second deliberation. Sammut also insisted there was no pressure put on that juror once it was discovered that he was the one responsible for the two different vote counts.

Sammut held that he made his decision based on “What [he] was seeing in terms of the performance reviews.” “Evidence is evidence,” he said, though he admitted that KPCB’s lead lawyer Lynne Hermle was stronger on the whole than Ellen Pao’s lead lawyer Alan Exelrod.

It just seemed that the men, with the same character flaws that Ellen was cited with, were able to propel and continue. Juror Marshallette Ramsey

He described Pao as “intelligent” and “driven,” and when asked why he thought an intelligent and driven woman wouldn’t succeed in VC, he said, “I can’t answer that. I’m not a part of that world, but based on the testimony we heard, it was based on her sales ability, her ability to get along with people, and her personality. A lot of people can be very analytically driven, and it sounds like that’s what she was.”

Marshallette Ramsey, juror #2, an African-American woman who is a BART Manager, also said she made her decision based on the performance reviews, but she was “on the smaller end of those [10-2] numbers.” (Five men and five women had voted against Pao.)

She felt that Pao had both been discriminated against based on gender, and retaliated against after she complained about sexual harassment in 2012.

“The performance reviews were huge,” she articulated. “I felt that there were interpersonal skills or personality traits that were cited in those evaluations on both sides, but depending on how it was worded it could either propel you to promotion or hold you back. It just seemed that the men, with the same character flaws that Ellen was cited with, were able to propel and continue. [And] I definitely felt there was a correlation between the timing of the lawsuit and the subsequent termination.”

Ramsey was the most eloquent of the two jurors, “There is a responsibility that as a juror you take on in your connection to the outcome of the case. We didn’t rush to judgment because we wanted to go home today.” 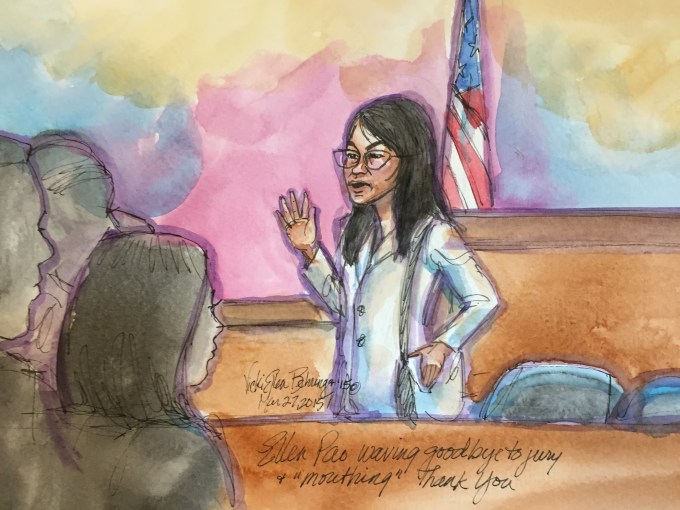 She said that she would try to take the lessons that she learned in the trial to heart in her own workplace. “Putting everyone on the same accord, and being part of that same accord, acknowledging or recognizing when something is inappropriate … Ellen Pao opened our eyes to all of that today.”

When asked whether she was ever shocked by the sheer amount of money involved in the case, whether it be the Kleiner partner salaries or how much the expert witnesses were being paid, she joked: “Jurors should make more than $15 dollars a day.” And then said, “I don’t think the salaries played into it. People do all different things for all different amounts of money.”

Ramsey said she realized this was a huge case in the media during Ellen Pao’s testimony, when the courtroom became standing-room-only. “Every bathroom break there were cameras at the end of the hallway. Before this I had never heard of it, never seen it. I had no idea why you guys were all here.”

Before this, she had little contact with the tech industry and had no idea what Kleiner Perkins was. When asked by another reporter whether she had friends in the tech industry, she replied, “Not that I know of. Not [any] who have admitted it.”

Ramsey, who found the guy snoring throughout the trial to be the most absurd thing about this case, also said that the jury never considered the broader impact of this trial on the tech community. “There was no discussion about the broader impact. We had to just consider this case.”

But Ramsey, who was in the jury minority with her pro-Pao votes, did have some broader thoughts. “By no means do I [hope Pao’s loss] sends a message to any other women who feel they’ve been wronged to not [speak up] or that it’s not worth it,” she said. “Even with what the 12 of us have gone through, it’s been worth it,” she said, echoing Pao’s statements. “If you feel it’s been done to you, stand up for yourself.”