With Twitter’s much more polished live-streaming app Periscope now on the market, Meerkat needs to strengthen its own social graph to keep users from straying to its new competitor. So today Meerkat for iOS was updated with recommendations of people to follow, a way to follow people from inside streams, and ways to discover streams your friends like. It’s also trying to neutralize some Periscope talking points like Meerkat being too publicly chatty by letting users opt out of syndicating their comments to Twitter.

Meerkat founder Ben Rubin tells me the features are designed “to overcome the fact that we don’t have access to users’ Twitter social graph. This is just the first step. :) ” 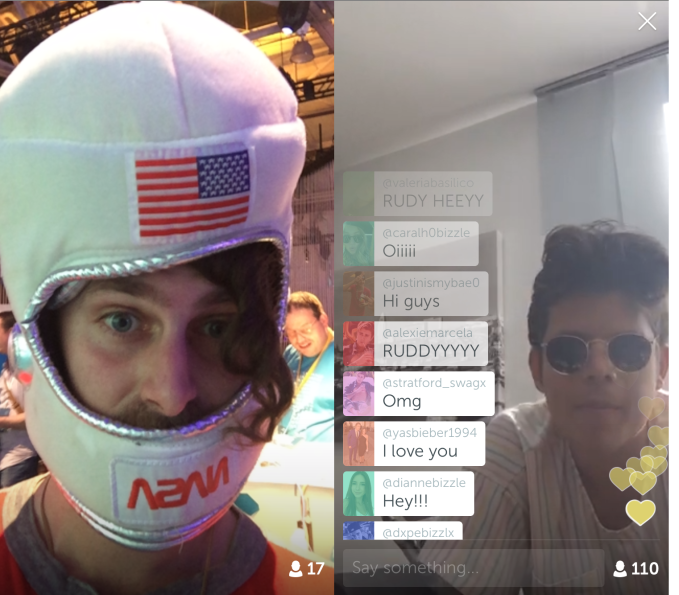 Screenshots from Periscope show me live-streaming the Omnibang from F8 on the left, and Vine star Rudy Mancuso getting flooded with hearts and comments while Periscoping with Shots founder John Shahidi on the right,

Periscope is largely thought to be a better product, with design flourishes and extra features. But as we saw with Facebook’s attempt to clone Snapchat with the more full-featured Poke, it’s a lot easier to build functionality than community.

Periscope could have run away with the live-streaming race if it had only launched a month ago. Instead, Meerkat burst on the scene and built an early user base of techies, plus some web stars and legitimate celebrities. It quickly became synonymous with real-time, mobile live streaming.

Yet Periscope was building community, too, just more stealthily. It was in beta testing for months with top Silicon Valley founders and investors before launching yesterday. Thanks to its acquisition by Twitter, it got access to a prestigious network of early adopters.

Periscope also got help from Twitter’s VIP relations team. I’ve heard that the same squad tasked with getting top celebrities to tweet incessantly was also helping get Periscope into the right hands. And the rumor according to one source is that Twitter was actively telling celebrities not to use Meerkat and wait for Periscope to come out over the last few weeks.

Yahoo reports that stars like Sophia Bush, Mark Cuban, Al Roker and iJustine were all on the beta. Already, a ton of social media stars like John Shahidi, Rudy Mancuso, King Bach, and Lele Pons are appearing in Periscopes. Whichever app recruits these new media celebrities with massive followings could in turn sign up their legions of fans.

Here’s a video demo of how Periscope works

Now, Meerkat is scrambling to rebuild itself as an app separate from Twitter. Originally, Meerkat relied entirely on Twitter for its identity, link distribution and communication systems. Then, two weeks ago, Twitter cut off Meerkat’s ability to let users auto-follow everyone they follow on Twitter.

Before, Meerkat could just piggyback on Twitter’s discovery features, but now it needs its own way for people to find who to follow, hence today’s update. 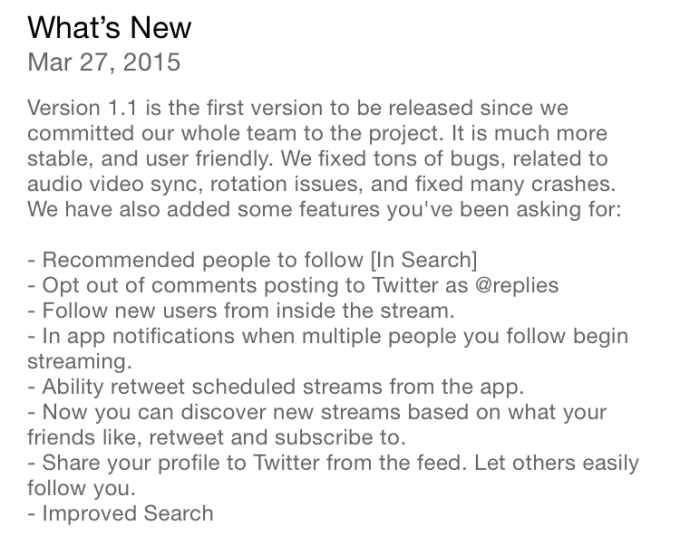 The question is whether Meerkat has built a stable and loyal enough social graph that it can survive competition from a more refined live-streaming app backed by Twitter. Periscope has made remarkable gains in terms of community over the last 36 hours. At this rate, Periscope could run wild while caging Meerkat as just an app for Twitter-haters.

Each day, the momentum behind mobile live streaming as a new creation canvas builds. While plenty called Meerkat a fad when it first launched, the ability to instantly peer through someone else’s eyes seems to have enduring value. The fate of this re-emerging medium could be decided in the coming weeks.