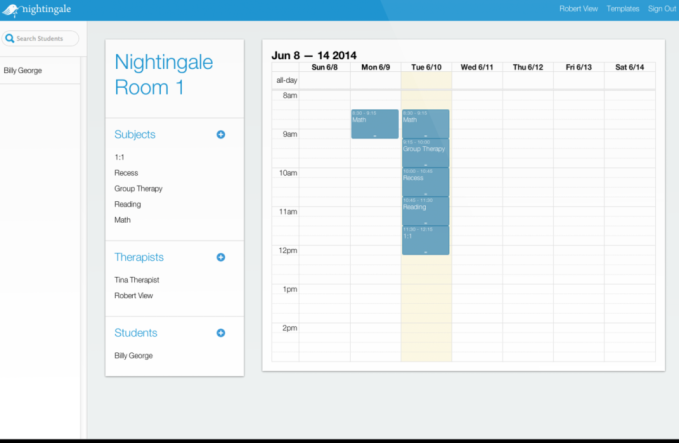 Nightingale, the Y Combinator and StartX alum working to improve the quality of autism therapy, is today launching its support platform for clinicians and therapists out of beta.

For the better part of a year, Nightingale’s platform has helped therapists keep track of behavior via a phone instead of using a clipboard and Excel. But Nightingale co-founder Delian Asparouhov says it’s only in recent months that the startup has been ready to roll the platform out for broader use at clinics.

“Back in October, we knew we were on to something but our product was barebones. People liked the platform but we weren’t getting the word-of-mouth traction we expected. So we went to our users and asked what workflows we could build into the product to get them to show it to their friends and colleagues,” Asparouhov told TechCrunch in a phone call.

After months of iterative work involving lots of feedback from users, Asparouhov says the team recently attended the California Practitioner’s Conference and for the first time felt they had product pull, despite it being their fifth time attending conferences. “The last several weeks have been reacting to that product pull,” he added with a laugh. Still, it was enough evidence the software could be used by a much wider range of clinics, which gave the team the impetus to launch out of beta.

Now that Nightingale is rolling out its platform to more clinics, it’s also pushing three new initiatives to find new places it could be used to improve therapy.

Working with Stanford Autism Research’s Carl Feinstein, Nightingale is trying to figure out how to make symptoms more apparent. “The best pediatricians have a months-long waiting list. The idea behind our Stanford work is to let parents use Nightingale to collect data while they wait for their first appointment,” Asparouhov said.

Since this use wouldn’t be for parents of children confirmed to have autism, Nightingale won’t provide any suggestions based on the data. Instead, Asparouhov says it will focus on teaching skills like “timing how long a child cries, how long does your child look into your eyes.” The startup will provide training videos showing what to look for in partnership with Special Learning from Atlanta.

Nightingale is also trying to build a tighter partnership with insurance companies that reimburse for treatment. They’re working with Oakland’s Center for Social Dynamics, whose director used to work for Kaiser Permanente. “We want to own the process at this clinic, from a pediatrician referring someone to a person using it and getting a reimbursement. We want to simplify the process so clinics don’t have to reach out to insurance companies for reimbursement for each client,” Asparouhov noted.

The startup’s last big effort is to figure out how they fit into special ed in school districts, starting with a 25-student trial in San Diego. Asparouhov says the trial will include two classrooms, with a teacher at the front of each class and students and therapists working together. Nightingale likes this space because “unlike a hospital, this is very relationship-based and progress tracking,” which plays to the platform’s strengths.