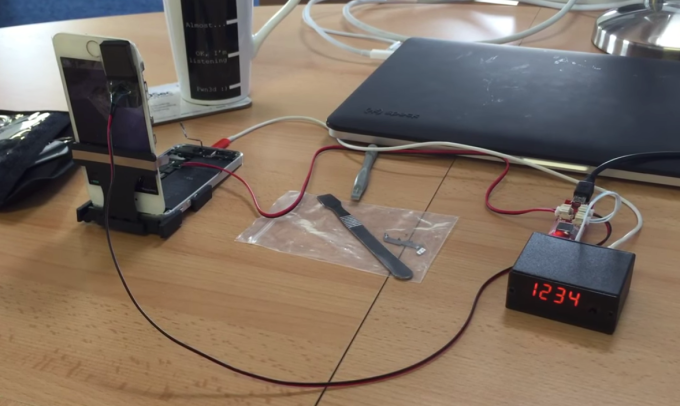 A simple PIN might keep your iPhone safe from the prying hands of a curious toddler or a drunk friend. But slap that thing in a robot that exists for no reason but to try every possible PIN one-by-one, and it’ll crack it right open.

These machines have existed for a while, but this one is particularly crazy: if you’ve got your iPhone set to clear all of its data after 10 failed guesses, it’ll try to exploit its way past that.

Note the “try” in that last sentence: while we’re still waiting on confirmation from Apple on this one, there’s a good chance that the trickery at play here only works if you’re on a build of iOS older than iOS 8.1.1 (Shipped November 2014). Apple’s notes for 8.1.1 mention patching a bug (CVE-2014-4451) that could circumvent the “the maximum number of failed passcode attempts”; it’s not clear if that’s the same bug at play here, though it seems likely.

Here’s the device in use, via MDSec, who was able to obtain the bruteforcer for around $300:

It can be a bit hard to tell what’s going on in the video, so here’s what you’re looking at:

Because each failed attempt requires a reset, each run takes roughly 44 seconds. If it fails until the very last try on a 4-digit password, that’s 4.5 days of bruteforcing. That’s not exactly Hollywood spy movie speed hackery — but if they’ve outright stolen your phone and really want to see what’s inside, it’s plenty quick.

So, how can you protect your device from this?

We’ve reached out to Apple for comment on the status of the exploit at play in the video, but have yet to hear back.