The three founders of Moltin, a member of the 2015 Y Combinator winter class, like many fellow members birthed their company idea out of necessity, coming up with a way to solve an entrenched problem they were facing.

In this case, they were working for a design agency in England, and they found adding e-commerce functionality like a shopping cart to a website was too hard and often expensive.

They decided to simplify it by creating an API-based framework that would become Moltin. The idea behind the product is to make it easier for developers to add e-commerce functionality with a few lines of code, Adam Sturrock, CCO at Moltin explained.

“We have components and interactions in the e-commerce space that [we have converted] into basic calls,” he said. Programmers can access the components by writing some code and linking to functionality like a shopping cart or check-out page.

And for those who aren’t that technical such as bloggers who might want to add e-commerce components to a site, they have simplified it even more by creating HTML widgets that will make the call for you.

Today, they have 1600 developers on the platform, 5 or 6 live installations and 30 or so in development, Sturrock reports.

And the team has devised a creative way to determine your pricing needs using a slider to drag and see what each pricing level gives you. 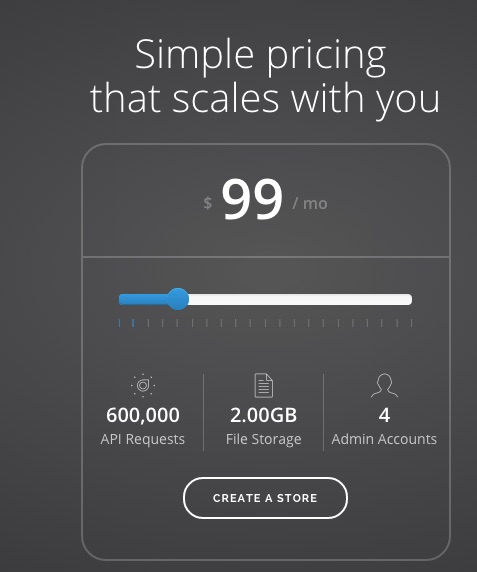 They started developing the company in England about 18 months ago where they joined an accelerator program called Ignite 100. They raised some money, added some functionality and moved to San Francisco a few months ago to be a part of the Y Combinator program.

In fact, they needed to apply for passports to travel to the US and get the interview to join YC.

Today as the program is coming to a close, Sturrock says it has been a great experience. This wasn’t the team’s first accelerator so they thought they knew what to expect going in, but Y Combinator worked a bit differently — in a good way.

“It’s been a shock how well it works,” he said. “It’s an intense experience with long days, long hours, but it made us rethink how we describe and sell our products.”

He said the partners helped them develop key messaging to get across to developers what Moltin was about.

By the end of the  first two weeks they had built out a website, and were getting people on board. They wrote a Getting Started Guide to get people going quickly and in general made it a more polished service.

He said, they’ve been experimenting with sales methods too. They tried working directly with agencies, but they tend to use more established products like Magento or Shopify.

They realized that developers want to try things, so they came up with the free version.

They found existing solutions were too complex or too expensive for many developers  — and if they hacked their own solution, they were forced to maintain it.

Moltin provides the basic building blocks and tries to make it as easy possible for their users.