Don’t be misled: HaikuJam is not a poem app. Sure this U.K. startup began, back in 2013, as an app for writing haiku collaboratively. For digitally penning one line apiece, between random strangers. But format has shifted function, driven by business intention and startup acceleration. This app no longer has poetry in its soul.

HaikuJam v2, officially exiting beta and launching now on iOS and Android, introduces collaborative social photo-sharing to the proposition. So users can create what co-founder and CEO Dhrupad Karwa momentarily refers to as “visual haiku”, before correcting himself with “essentially photo collages”. And do so within concentric circles of their pre-existing friends.

Pictures are now allowed to entirely replace words if HaikuJam users choose — resulting in a visual layer cake, made from three separately selected images, taking the place of the erstwhile collectively composed haiku (although the app still supports writing too). The team’s intention is to add support for other types of rich media collaborations in future, such as video and audio.

The earliest users of HaikuJam were actually Twitter micropoets, according to Karwa. But they have moved on (or moved back). He says the beta phase of the app has been providing an outlet to (a very small group of) people who might not normally feel able to pen lines or creatively combine visual imagery.

People who might be stressed in their day jobs. Who are seeking escape through frictionless novelty. These are the folk collectively combining momentary musings on HaikuJam to create a fleeting yet social thing, whilst accruing in-app Karma points (HaikuJam’s feel-good engagement currency). Laying down conjoined digital reflections, designed-by-intimate-micro-committee. Perhaps Shingy is a fan.

“It turns out that the people who are currently really active and enjoying the product are not poets. They’re investment bankers, nurses, doctors, students. Speaking to them they like the app because they felt it gave them a sense of escapism. Stress relief. And accessed that creativity again because they don’t work in creative professions. They don’t write or paint or sing,” Karwa tells TechCrunch.

“They really like the fact they didn’t have to invest a lot of time, and just write a couple of lines, and feel creative again. And when someone else adds to your line that’s the return of your investment of time… There are a number of poets who still do use it but what we found was… the power users are not poets. People who are just time poor and looking for a creative medium and expression tool, and almost a communication tool.”

HaikuJam has attracted a total of $150,000 in seed funding at this point, from the lead investors in JustGiving, Oxygen Enterprise Partners and via University College London, the founders’ alma mater. The team will be looking for another raise in the next few months as they seek to push beyond what has only been micro-usage thus far.

Here at the caesura between beta and bona fide launch, active users of HaikuJam number around 500, and total app downloads stand at 2,000. But Karwa says the team has intentionally kept usage low as they have been concentrating on sculpting a product they believe can scale.

The short story here is poem apps don’t scale. But it’s possible to dream photo-festooned collaborative creation tools might, especially given that — in startupland — it’s been shown time and again that a picture is worth a lot more than a handful of syllables, however pretty.

Also true in conclusion: power users are not poets. They’re too time-strapped for that. 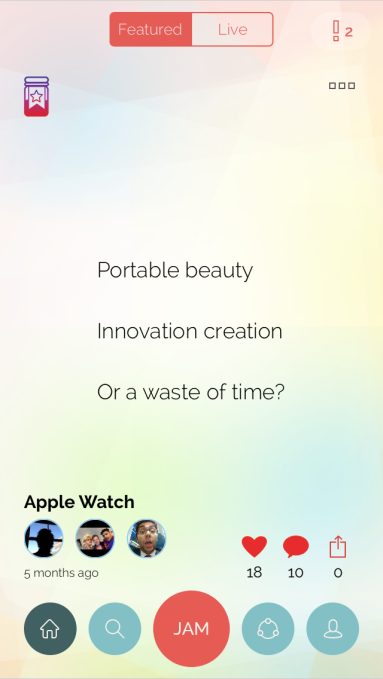