Dataminr, a startup that parses and crawls the vast glut of real-time informatio posted on social media sites like Twitter to extract key developments for public safety, bankers and news organizations, has confirmed that it’s raised another $130 million in funding. The funding — a Series D led by Fidelity — will be used to expand into new enterprise verticals, with risk management being a key new area. The company also plans to take the U.S.-based service to more geographies.

“This capital will enable our company to meet the tremendous global demand for our products, expand into a number of new markets, and integrate valuable new datasets into our algorithmic engine to enhance our Twitter-based signals and broaden our offerings,” Bailey, CEO and co-founder of Dataminr said in a statement.

The funding was originally leaked to the WSJ, which pegged the valuation at around $700 million and we have now confirmed that figure to be accurate.

In addition to Fidelity, other investors include a long list of financial institutions and prominent individuals in the finance industry, which says something about where the company has been seeing a lot of traction.

They include (deep breath) Wellington Management Company LLP and Credit Suisse NEXT Investors, as well as John Mack, former CEO of Morgan Stanley; Vikram Pandit, former CEO of Citigroup; Tom Glocer, former CEO of Reuters; Noam Gottesman (TOMS Capital LLC), founder of the hedge fund GLG; and Nicolas Berggruen, founder of the Berggruen Institute on Governance. Other investors in this round are Venrock and Institutional Venture Partners. And other investors in Dataminr include WorldQuant Ventures, Glynn Capital and Goldman Sachs.

“Dataminr has become the front line of real-time information discovery in most geographies and fields of human activity,” said Dataminr Board Member Nick Beim of Venrock. “It has the potential to transform the ever-increasing number of industries that rely on real-time information.”

The company, based in New York, has raised just under $180 million to date.

The issue that Dataminr has been tackling since being founded in 2009 is easy to understand if you are among the billions of consumers who use social networking services. Platforms like Twitter, Facebook and Instagram are open to all comers, and collectively they contain a glut of data from the masses who use them to record everything from their mood, political feelings, and what they ate this morning.

Or, as Bailey told me, “Twitter is a performative tripwire for events that happens around the world.”

For businesses that rely on external data to help make decisions or just know what is going on, this is a potential goldmine but one that requires a lot of refining in order to extract the most valuable nuggets and to make the nicest ingots.

And that is where Dataminr comes into the picture, with algorithms that are used to filter social media services but also other data sources like moving stock prices, news sites, and many other public and private real-time information sources. They also have plans to expand that more and more over time — to pick up signals for developing stories.

What’s interesting is that this seems to be more than just picking up and funnelling data based on specific keywords. Sometimes it’s Dataminr uncovering what to look for — as was the case last summer when it started to pick up buzz about ISIS before it was a publicly known group, and then tied this to oil prices (illustrated above).

“Basically if there is information on the front line our ambition is to ingest that data and be more reliable and accurate,” Bailey said.

Other notable applications of this have been in news — where Dataminr last year worked with Twitter and CNN to create a service called Dataminr for News. That service, which is now being used by 150 newsrooms in the U.S., has also been involved in a beta with the BBC and will be soon launching internationally.

Others include law enforcement and other government organizations, where Dataminr reads and maps and organises data around specific subjects, which then gets presented on a dashboard for its customers to monitor it. The results can look like this: 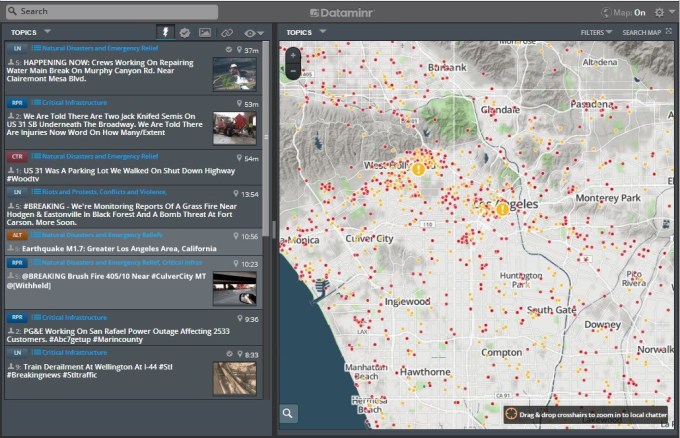 Similarly, the financial product provides a feed like the one people already use on Bloomberg terminals. The difference here is the inclusion of sentiment analysis alongside the news. 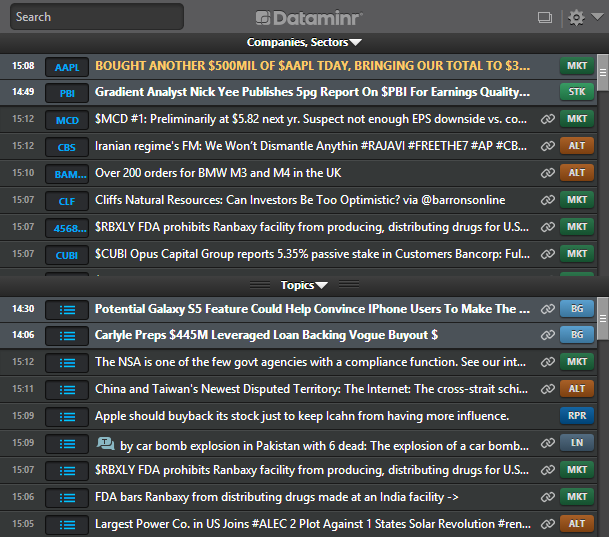 One of the areas where Dataminr hopes to take its data chops next is into the area of risk management. This sits so close to the finance and political verticals where the company already does business. The company is already apparently working with corporate watch centers to track breaking events that affect business operations, plants and employees, and the idea it seems will be to take this into a wider product push.

The company does not disclose revenue or even pricing for its service.

“What I can say is that we do have packages that are tiered so that we can appeal to different parts of the industries for which we surface data,” said Bailey.

In other words, a city government would have a different pricing package than a global financial behemoth like Morgan Stanley. “The larger opportunity over time is to take in as many customers across the many opportunities as we can,” he said. He said that currently Dataminr does not use its own platform to help predict the best pricing for its own services.