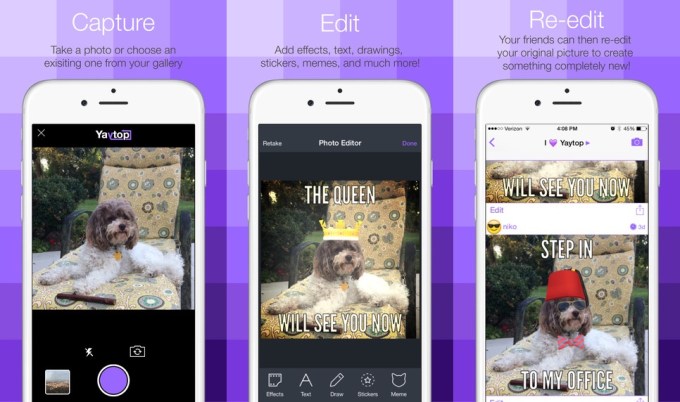 Admit it: the last time you posted a picture to Instagram, you tried at least three combinations of poses and camera angles. You then tried at least half of the filters in the app, and maybe even went over to something like VSCO Cam to try a few more.

The need we have to get the most likes, shares, retweets, and comments leads to people using Instagram like some gamers play World of Warcraft, boosting their characteristics to make the most impact with a single post. “The camera is above my face, I’m not doing that weird smirk thing, OK this picture should do pretty well,” we think to ourselves.

Last Spring, University of Michigan students Niko Natsis and Aaron Nussbaum noticed that some of their friends and siblings went so far as to send their pictures to each other on iMessage in order to give edits that would do better on social networks. The pair decided to build Yaytop, an app that lets you quickly ping friends for help with edits before you post to Instagram or Facebook.

Natsis says they weren’t sure if they were on to something, or if their social circle just happened to be particularly narcissistic, noting “we spent a couple months just talking to and observing people to see if this was a wider trend.” Nussbaum started cranking out the early iterations of Yaytop based on their research, pulling interface ideas from Instagram and Snapchat. The app quietly launched on the App Store earlier this month, giving me chance to play with it and get feedback from friends. 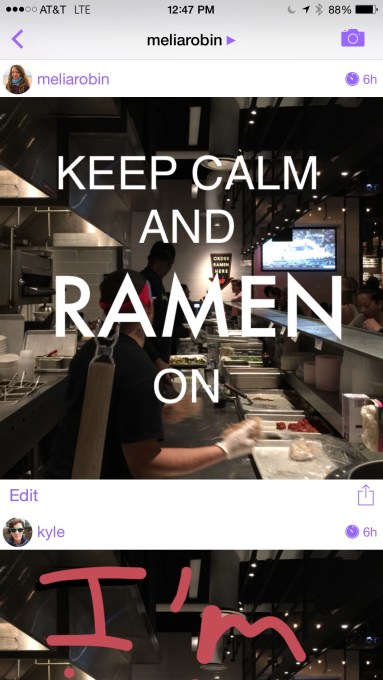 Each time you post a photo to Yaytop, you’re given a broad set of tools for quickly customizing its look. You can draw, use stickers, change color, crop, filter, and orientation, all with intuitive multitouch interfaces. Then you choose from friends or groups of friends to send the picture, and set a period of three, seven, or fourteen days before it disappears from that conversation.

Once a photo is in a conversation thread, anyone in the group can double tap it to either add edits or to apply their own edits to the original photo. This lets the original poster quickly see a variety of differing versions before taking the photo over to a more permanent home on another social network, which can be done in a moment thanks to the iOS Share button located underneath every picture in a chat.

Sending photo edits back and forth is actually quite a bit of fun. In addition to helping pick filters, I found that my friends and I would use the app as a way to talk about what we were doing. Unlike with Snapchat, once I had already shown the other person what I was doing, I could just write something on top of their photo to ask about it instead of feeling forced to send another photo of what I’m doing like some kind of social tennis match.

There should probably be an option for letting a photo stay in a chat permanently — it would be fun to look back at some of the exchanges down the road and re-surface them to the same group with new edits. It’s clear that the app is trying to use its utility for the social networks of today as a way to get people to use it as an independent group messaging app later on, and with tweaks like that I think it could carve out its own niche.