While the question of what problem the Apple Watch specifically fixes continues to preoccupy commenters, ResearchKit’s raison d’être is clear: medical research needs data, and iPhones offer the promise of a populous pipeline that can get more data flowing to the scientific community.

The first group of apps developed using ResearchKit — and announced on stage at Apple’s event — are for studies on asthma, breast cancer, cardiovascular disease, diabetes and Parkinson’s disease.

ResearchKit is open source. Apple says it intends to release the framework next month, allowing researchers to contribute to specific activity modules, such as memory or gait testing within the framework, and share them with the global research community to advance disease research.

This is not just about leveraging iOS device connectivity as an alternative to administering tedious and time-consuming paper-based studies. But also using specific sensing hardware that people already have in their pocket as a diagnostic testing tool — be it data inputted via the touchscreen, or via measurements from the accelerometer (for instance to test physical gait stability) or even the microphone (as way to gauge lung capacity).

The consistency of iOS hardware (when compared to the far more diverse Android ecosystem) is likely to be helpful in a research scenario — certainly to some types of studies that rely on taking measurements from mobile device sensing hardware. ResearchKit apps work on iPhone 5, iPhone 5s, iPhone 6, iPhone 6 Plus and the latest generation of iPod touch devices.

Studies can also be extended beyond iOS hardware via gathering data from third party health-monitoring wearables and other devices that are connected to Apple’s ecosystem via its HealthKit framework. (Apple’s own Health app was already taking a granular approach to personal medical data, with some sixty types of health data contained in its repository.)

The big promise of ResearchKit is scale, given that research studies will have the chance to reach more people than they might otherwise, with iOS users running into the multi millions globally.

“iOS apps already help millions of customers track and improve their health. With hundreds of millions of iPhones in use around the world, we saw an opportunity for Apple to have an even greater impact by empowering people to participate in and contribute to medical research,” said Jeff Williams, Apple’s SVP of operations, in a statement at the launch. “ResearchKit gives the scientific community access to a diverse, global population and more ways to collect data than ever before.”

The app format also minimizes obstacles to participation in research studies, compared to, say, asking participants to submit information via paper forms. Studies delivered via apps can also utilize established mobile tools, such as push notifications, to maintain engagement from participants — so might be able to run for longer, or pull in more consistent data (in theory).

Early signs are promising for ResearchKit uptake, although it will be interesting to see what happens with apps that are launched outside the halo of an Apple product announcement. And once more studies are live competing for participants.

After six hours we have 7406 people enrolled in our Parkinson's study. Largest one ever before was 1700 people. #ResearchKit

Signing up to a ResearchKit study is done with a digital signature, via a finger on the touchscreen. And researchers can use the ResearchKit framework to present what Apple describes as “an interactive informed consent process”.

Concerns about this process have already been raised — given that there’s nothing to stop minors lying about their age, for instance, in order to sign up to studies without gaining parental consent (as The Verge notes there’s no age verification as yet, albeit that’s something that could be added in).

But this is exactly the sort of balancing act that ResearchKit apps will have to strike: increasing participation in medical research by mobile means inevitably requires some loosening of controls over how participants join a study, since they are not attending a clinic in person. However for the data to be meaningful — and ethical — some checks and balances are obviously needed.

(It’s worth noting that Apple has updated its developer guidelines since the launch of ResearchKit, to specify that developers conducting human research must comply with applicable laws for each territory the app is made available, and must obtain consent from participants (or from parents or guardians in the case of minors).)

Users are also able to choose which studies to participate in, including sharing only partial data with a particular study if they wish. That element of user control may also help increase participation.

When it comes to privacy, Apple has emphasized it is not itself party to any of the data being shared. That’s a key point, given that medical data is pretty much the most sensitive category of personal data there is. But again concerns have been raised about how rigorously ResearchKit data is being anonymized, and where it might end up.

Sage Bionetworks, which has made several of the early ResearchKit apps and is anonymizing the data before sending it on to the research institutions involved in the first group of studies, told The Verge “we can’t promise perfect anonymity”, adding:

The biggest risk in these studies is to your privacy; we’re going to de-identify it, but because we’re going to make it available for lots of research, there exists a chance that someone could re-identify you.

That’s the sort of caveat we’ve come to expect from digital services handling and sharing user data. The issue here is the data in question is both extremely sensitive and intended to be widely shared for research purposes — amping up the risks if it can indeed be de-anonymized. 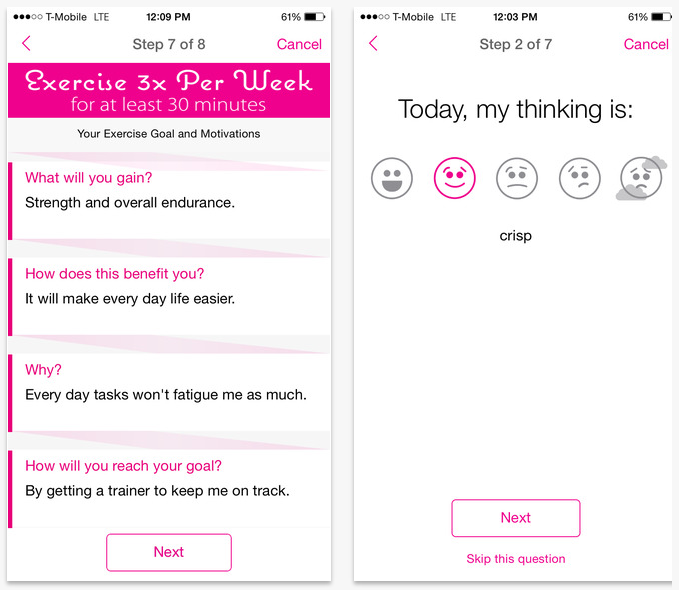 The first breast cancer ResearchKit app, called Share The Journey, is focused on studying post-treatment women to identify follow on symptoms and their effects on women’s lives.

Judy Salerno, CEO of breast cancer charity Susan G. Komen, which is one of the not-for-profit organizations supporting the Share The Journey app, is unequivocal in her enthusiasm for ResearchKit — and what she describes as “an enormous opportunity for women and for science”.

“In clinical trials recruitment is always an issue. But this is an opportunity to get out of the lab, get away from the checklist paper surveys, and bring research to the patient and make it true person-centered research, truly an opportunity to really change the way we think about the research environment,” she tells TechCrunch.

“We knew that this was an opportunity, not only for research but for women too to understand their own journey after breast cancer treatment. It’s so often that women who have gone through breast cancer treatment are so happy to just be alive that they really don’t report the symptoms that can have a real impact on quality of life. For many, many years.

“So this is an opportunity to give voice to those symptoms, those things that people endure often for a lifetime, and to create a community around it and an opportunity for us to understand it from a scientific point of view, so it can make a real difference — not only in individuals’ lives, but in our understanding and potential treatment of these post-treatment effects.”

In the first hour after the app was announced on stage by Apple, Salerno says “a few thousand people” enrolled for the breast cancer study. By dinnertime that same evening the number had increased to around 7,000.

“It’s a huge leap forward to moving from anecdote to science and from science to solutions for women who have had post-treatment issues with breast cancer which is incredibly common, all too common.”

On the question of population bias, another early criticism of the ResearchKit initiative, given that studies are necessarily limited to owners of iOS devices, Salerno suggested similar initiatives will arrive on other platforms “over time”. And specifically as regards the For The Journey app, she confirmed an Android version is in the works, although there’s no release date yet.

Unlike some of the other initial ResearchKit apps which feature touchscreen tap tests and gait analysis using the phone’s accelerometer, Share The Journey is not using iOS hardware for active testing of study participants (although daily physical measurements can be imported into the app from the Health app), so it’s arguably less tied to being delivered by specific (iOS) hardware than some of the other initial research studies.

Salerno’s counter argument to the population bias concern is that using a mainstream mobile platform as a research conduit can make the study more inclusive than traditional research when it comes to reaching certain demographics.

“The interesting thing is when you think about the populations that are very difficult to enroll in clinical trials, people of color for example, they are very laced in to their phones, their mobile devices, so this is a way not only to create a large amount of data that can be shared easily but also to bring in a more diverse population to research studies. And that’s what’s so amazing about it,” she says.

She also talked up having a structured, open source framework for conducting medical research vs individual organizations creating their own siloed apps. That’s a key part of what she sees as transformative for medical research about the ResearchKit initiative.

“This is so much more robust than anything that I saw that was under development,” she says. “There’s a few really good apps about chronicling your journey, but this steps up the game so many more levels. And it brings it into research. Which is really amazing because — and the fact that it will be an open source database is just, I think, outstanding — in the research environment for so long we have held our information closed because people were competing for grants and for resources but now this is an opportunity to query what will potentially be a very large database with many important questions.”

When it comes to what Komen and the other supporting charities hope to learn from the Share The Journey research study, Salerno says it’s about identifying the sorts of issues women who have survived breast cancer suffer from post-treatment, and how particular lifestyle factors, such as the level of exercise they get, can impact on follow-on symptoms.

The app itself has also been designed to help the women glean personal health insights that could be helpful even before any of the wider study’s research data has been crunched.

“Two things that I think are really wonderful innovations are the… journal, you can keep an individual diary. And another is you can opt to have exercise prompts through the kind of technology that Apple has done so well,” she says.

“The interesting and important thing about this is that women can participate in many different parts. All or selective parts of this app,” Salerno adds. “We’ve set this up so that there will be studies to see whether keeping a diary or whether having exercise prompts will improve your outcome. So there’s already research questions embedded in the way it was constructed.