Knozen has been described as an app for rating your coworkers, but the startup has been moving beyond that, into becoming a broader social game and personality test.

In fact, if you visit the Knozen website now, you’d be hard-pressed to figure out that there’s anything job-related. Instead, it describes the app as “a new kind of game where your opinions matter.”

Basically, when you open the app, you can find friends (including Facebook friends and friends in your smartphone address book), then you’re asked to answer questions about each other, like “Who’s more of an introvert?” and “Who’s likely to have their own YouTube channel?” and “Who’s more of a magician?” (These are all actual questions from the app.)

The app’s has been expanding its social functionality more recently with the ability to invite friends from Facebook and from your address book. 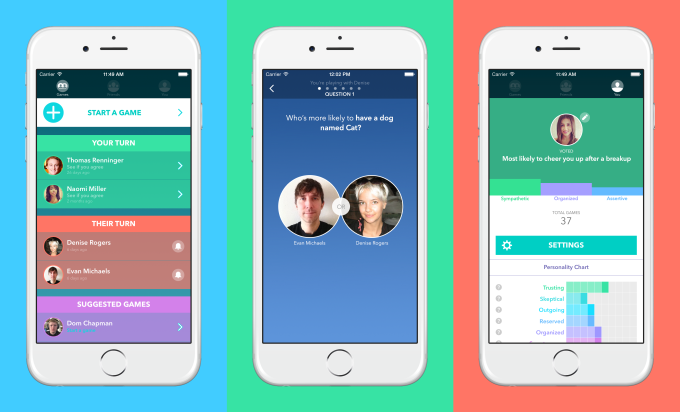 So what does anyone of this have to do with rating coworkers? Well, the app ultimately creates a personality profile highlighting “what people like most about you” (as well as your work and education history), which could be be useful in a work context — when I met founder and CEO Marc Cenedella (he previously founded job site TheLadders) earlier this year, he talked about how many companies have shifted from a “command and control” structure and are becoming more collaborative, so building teams based on personality strengths and weaknesses becomes more important.

In a more recent email exchange, I asked whether there’s any tension between using Knozen in a social versus workplace context. Cenedella replied:

We don’t think so. People are curious about what makes them unique and different from one another – whether in the workplace or within close circles of friends and family. We’ve created a positive and supportive platform for people to discover and share their opinions about one another. You know, the question of the blurred lines between work and friends is an interesting one. The opening up to everyone has allowed us to have a little bit more fun with the questions and some of the game elements. It’s not that it makes Knozen unimportant to the workplace, per se, but it probably makes it feel a little bit more like relaxation and entertainment rather than a productivity tool.

Knozen isn’t sharing total user numbers, but it says that 900,000 questions have been answered on the platform, with the top 10 percent of users spending an average of 137 minutes in the app in February. Users are inviting 2.2 other users on average, and as a whole, they’re answering 30,000 questions every day.