Of all the complications that will worry the outer rim of Apple Watch buyers’ minds, the question of whether they need to purchase a case to protectively encase their expensive wrist-wear is perhaps the most frivolous.

On the surface it sounds ludicrous. Who keeps a watch inside a case when it’s attached to their person? And yet the Apple Watch is really a very small wrist computer, with a price-tag that ranges right up to the luxury end of the market. To $10,000, or even $17,000.

It’s also intended as a multipurpose device, with fitness tracking functionality rubbing up against notifications and comms, with some ostentatious bling thrown in (at least if you’re shelling out for 18-karat gold). So it’s supposed to track you when you sweat through a half marathon and then remain on your wrist during that fancy dinner. Same device, different aspects.

Add to that, given that keeping your smartphone in a protective case is well-established behavior, the notion of similarly encasing a smartwatch is only really a small step away.

And so enter device case-maker, Lunatik, with a plan to build and sell ruggedized cases for the Apple Watch. It’s been working on this accessory since Apple officially unveiled its smartwatch last fall, using a mechanism previously patented for encasing the iPod Nano when worn on the wrist. The metal case is being designed to protect without limiting access to the various controls and sensors on the watch.

The forthcoming Epik Apple Watch Kit is only in prototype form at this point (with the latest samples pictured pictured below) — the team is aiming for a shipping timeframe of three months after the Apple Watch itself comes to market at the end of April, so circa summer.

Lunatik founder Scott Wilson says the intention is to test the market for this Apple Watch accessory, via a crowdfunding campaign. So it’s ready to admit it might have misjudged the madness of the moment.

And quite possibly it has. 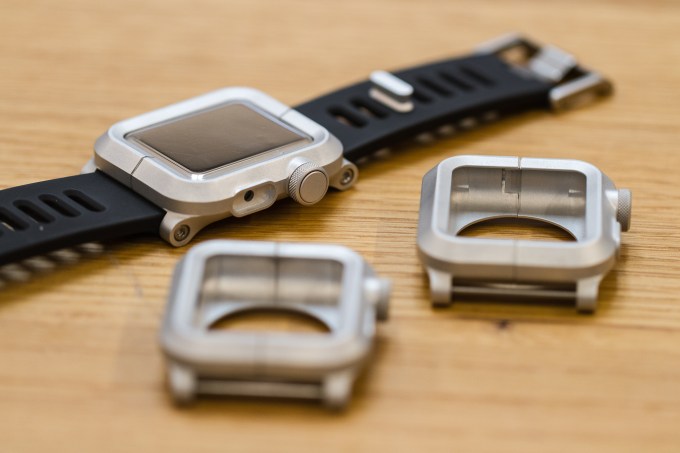 But if someone is crazy enough to spend $15,000 on a smartwatch, what’s another $99 to $149 on a ruggedized case-plus-strap combo which promises to keep a few scratches off your investment?

“Wearable technology is most relevant in situations where a phone interaction is not accessible or ideal. Sport, fitness and extreme conditions are a few of these occasions,” argues Wilson. “They also require more physically enhanced and purpose-built design to endure these extreme conditions.”

The aluminum Epik face case will apparently include hydrophobic vents for “an added layer of dust and water ingress protection”. It will also come with a custom plastic band strap, so you can leave your fancy leather/linked Apple Watch band at home when you hit the trail.

Wilson also talks up the personalization angle as a selling point for third party Apple Watch cases — given that wearable tech can’t help but elbow into the fashion space. So this is also about offering choice to appeal to personal taste, identity and style.

Which is another way of saying that a naked Cupertino-made Apple Watch might not look brawny enough for some folk. And those guys might actually prefer to put a rugged rim on it.