While health-conscious nerds might like to play around with quantifying their activity and lifestyle for kicks, people with diabetes have no choice but to track their blood sugar if they want to stay well. It’s a key part of managing this chronic disease, which requires regular insulin shots to replace what the body can’t produce.

Vienna, Austria-based mySugr was founded back in 2012 (although the team also won a TC pitch off back in 2011) with a mission to make managing diabetes “suck less”, as co-founder Fredrik Debong puts it — one of two of the four co-founders himself living with type 1 diabetes. It’s doing this via building digital products that take the strain out of aggregating diabetes-related health data and simplify management of the chronic condition.

Thus far, mySugr has amassed more than 230,000 registered users of its diabetes management apps and web-based educational tools, which use gamification elements and daily goals, to help users stay engaged and motivated with the grind of diabetes therapy compliance. They’ve also built an Optical Character Recognition app that allows users pull data from existing (non-connected) blood monitors into their smartphones where they can do more useful stuff with it.

MySugr has gained FDA medical device certification for its diabetes logbook app — a process Debong says  took some one and a half years, including the research involved — noting it was one of the first “ten or 15 apps to ever be registered with the FDA”. They have also secured medical insurance cover for the business. “Now looking at the current development of the FDA and how they are approaching medical device apps and mobile apps it turns out we were right, so we’re happy to have that behind us already,” he adds.

The main demographic for its products at this point is 35 to 50 year old diabetes sufferers, with the U.S. its single largest market. The products are also available in Europe, Canada, Australia, Singapore and Hong Kong. MySugr’s business model is b2c, via direct subscriptions and freemium ad-supported versions of the software, but they are also licensing products to healthcare insurers.

“Our logbook application… synchronizes blood glucose values with different hardware devices, blood sugar meters, very soon blood pressure measures, scales, everything like that. To really have something that totally aggregates your health data but also helps you to get value out of the data,” says co-founder Frank Westermann.

“Before we created mySugr there was a messy [management situation] for people with diabetes. Normally they write down their blood glucose values in a paper-based diary. Super boring, annoying and only a few people do it. What we do is we build a whole experience out of aggregating your data — we use gamification elements, so we get rewards points, you can make challenges in our application. We have a daily goal, which is to beat your diabetes monster… So we really created an experience out of logging your health data. And that is what makes us totally different from all the other apps out there.”

“Our approach… is patient-focused, patient-centric. Frederik and I do have diabetes. We have half of our company suffering from diabetes, so we exactly know the problems we have in our day to day lives and we try to solve these day to day problems,” he adds.

They have more products in the pipeline, but are keeping those under wraps for now. Today the team is announcing a new seed funding raise — of $4.8 million from two new investors, Switzerland-based Roche Ventures and U.S.-based iSeed Ventures. Existing investor XLHealth, from Germany, also participated in the round. Total funding raised to date is around $5.8 million.

What’s the new cash injection for? Serious scale — as befits the team’s missionary zeal to help more diabetes sufferers like themselves. “We’re going to beat fucking Nike,” is Debong’s concise summary (he notes the team knows of two people who have tattoos of the mySugr product logo right now — so it’s chasing Swoosh quantities). “If we can scale this to 5 million people or to 380 million then we’ve changed the philosophy of the earth.”

“When it comes down to it, what we founded the company on was to make diabetes suck less. And that has since day one been an unspoken mantra,” he adds. “Change the philosophy of diabetes therapy. Diabetes therapy takes a lot of time, a lot of effort. And just letting go is so easy. So if we can flip that and change the attitude when it comes to therapy — that’s actually the mission.” 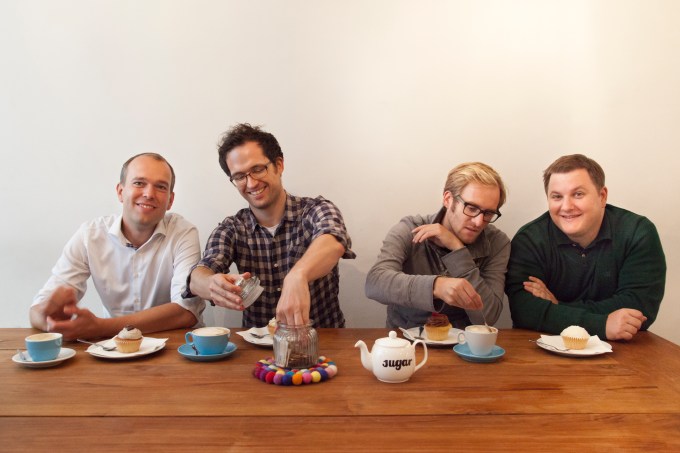 There’s certainly growing momentum behind digital health. Just this week Apple announced an initiative to turn iOS devices into a medical diagnostic research resource, called ResearchKit. The proliferation of powerful processing and sensing devices, coupled with the human preoccupation about personal wellness, makes for a potent combination — and a sizable business opportunity in the healthcare space.

With connected devices gathering and providing access to more and more healthcare information the role of doctors will change to “more of a coach”, argues Debong.

“In general what mobile health has the ability to do is to make decision-making for us patients much easier,” he says. “If we have the data at the tip of our fingers, that’s great. Now, as you see in the development of healthcare worldwide we start to see a lack of doctors, a lack of time when it comes to how doctors treat patients. And by enabling validated products, such as ours, to be used in diabetes management or in other disease management programs it will be much more efficient how a doctor is able to service populations.”

“M-health gets right now into the mass market. That’s a development that’s definitely been fueled by Google and Apple opening up their systems, building platforms which is great,” adds Westermann. “It’s very good for us.

“On the other hand ResearchKit… from a technology standpoint is just a great tool. It will help a lot to understand disease data better. For example diabetes is a very, very data-driven disease. It’s all about insulin units, carbohydrate grams, and blood glucose levels. And data is a big part of diabetes therapy. And it’s a big part of other diseases so it’s great to aggregate more data to better understand these diseases.”